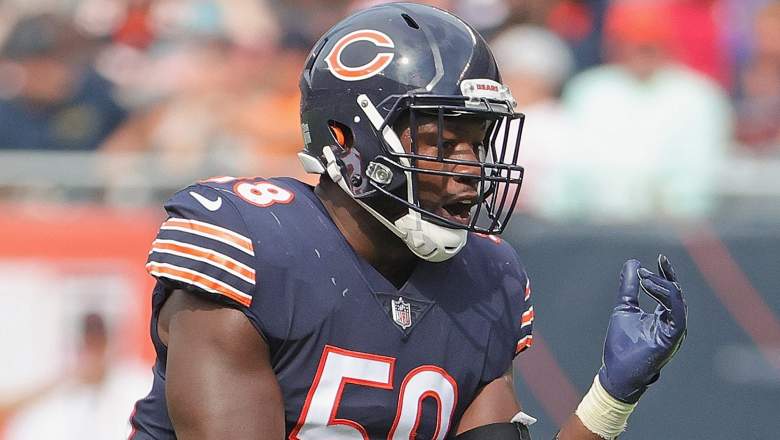 The Chicago Bears will have to do without top linebacker Roquan Smith at training camp.

According to NFL insider Ian Rapoport, Smith will not participate in the team’s camp, which begins July 26 for veterans, because he is unhappy with what he was offered in contract renewal talks. Per Rapoport, “Smith has yet to receive an offer that he would even remotely consider.”

Smith, 25, has established himself as one of the best young linebackers in the NFL. He has amassed over 100 tackles in each of his first four seasons, and in the last two seasons he has had over 300 tackles and 30 tackles-for-loss. The only other LB in NFL history to do that is Hall of Famer Ray Lewis.

Smith is clearly the young leader of Chicago’s defense and chances are the team will extend him over the next month or so. It’s likely his holdover is young LB trying to test his new general manager Ryan Poles.

Speaking to the media on April 20, Smith said he hopes to stay with the Bears for the foreseeable future. “Definitely, yes,” Smith said when asked about staying in the Windy City long-term. “That’s my plan.”

Smith, a former University of Georgia eighth overall pick, negotiated for himself and not an agent.

“At the end of the day, it’s personal,” Smith said of his rationale for going agentless. “All the business is more my business upstairs. I am confident that we will take care of everything.”

It’s clear that Smith wants to get paid among the top tier ILBs. The highest-paid LB in football is Darius Leonard of the Colts, who makes an average of $19.7 million a year per Spotrac. CJ Mosley of the New York Jets is the second-highest-paid ILB in the league, earning $17 million per season.

“At the end of the day, and I will always be like this, I am me and I will stand up for what I believe in,” Smith added. “And my job and what I believe in is to show up and do what I have to do. I don’t focus on others or anything like that. I only know what I signed up for.”

With Smith unlikely to appear at camp, the Bears will also be without Jaquan Brisker from 2022’s second round, who is enduring disputes with his rookie contract. Brisker is expected to be the starter opposite Eddie Jackson, so it looks like the Bears will be without two starters. Or maybe three.

There’s also veteran pass rusher Robert Quinn to consider. After leading Chicago in Sacks in 2021 (18.5), Quinn was rumored to want out. If the veteran defender shows up, he’s certainly planning to play. If he doesn’t, a trade could come.

The ball is now in Poland’s hands as far as Smith is concerned. We’ll see how Chicago’s first-year GM handles the situation — and the rest of Chicago’s growing list of player absences.