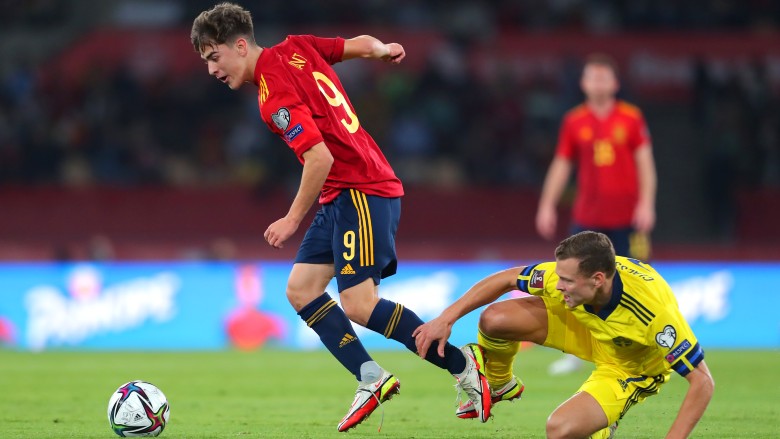 Barcelona’s 17-year-old midfielder Gavi was another brilliant dribble in the World Cup qualifier between Spain and Sweden on Sunday at La Cartuja in Seville.

The teenager, who just made his fourth international match for La Roja, showed incredible strength and touch to leave two defenders dead and then race the ball into the field after just 17 minutes, as ESPN shows.

Gavi didn’t make his debut for Spain until October 2021 and became the youngest player to appear for La Roja at just 17 years and 62 days. The teenager quickly adapted to international football and earned high praise for his performance against Sweden.

Football Espana’s Alan Feehely explained what made the youngster stand out in the crucial World Cup qualifier.

Transfer expert Fabrizio Romano was impressed by the Barcelona teenager.

Perhaps the greatest praise of all came from the people at La Cartuja, who chanted Gavi’s name loudly. It was no surprise that fans showed their support for the Barca youngster, who was born in Andalusia and started his career at Real Betis.

Spain won the game 1-0 thanks to a late goal from substitute Alvaro Morata. The win means that Luis Enrique’s team has booked their spot at the 2022 World Cup in Qatar as Group B winners.

Gavi has also impressed for his club team this season after making his breakthrough in the first team under former boss Ronald Koeman. The Dutchman was widely criticized during his tenure but made Gavi his La Liga debut against Getafe in August 2021.

Despite his tender years, Gavi has become a regular for the Catalan giants. The midfielder has already played 14 appearances in all competitions and should be a regular in the starting line-up for a long time to come.

Barcelona are already working on a deal that will secure the youngster’s long-term future at Camp Nou. Transfer expert Fabrizio Romano have reported that the Catalans will offer a new five-year deal and believe it is only a “matter of time” before an agreement is reached.

Gavi will now return to Barcelona and begin his life under new manager Xavi, who has replaced Koeman at the helm. The club legend will play his first game as coach on Saturday 20th November at Camp Nou against Espanyol.

Xavi has already made it clear how highly he rates Gavi, as reported by Diario AS.

“He’s a guy with so much talent. What surprises me the most is that he’s only 17 years old and he’s already playing like a 30-year-old. That’s the great quality I see in Gavi, ”he said. “He has a very bright future and is a good player at the moment. At only 17 he shows that he can keep up at the highest level. It’s incredible. Technically he is very good and he also has the physical prerequisites to be successful. He has everything to be successful and has a great future ahead of him. “

The new Barcelona coach has a host of exciting young midfielders to work with at Camp Nou. Gavi is added to the first-team squad by his teenage colleagues Pedri and Nico Gonzalez, while Riqui Puig is only 22 years old and Frenkie de Jong is still only 24 years old.

The new Barcelona coach has a host of exciting young midfielders to work with at Camp Nou. Gavi is added to the first-team squad by his teenage colleagues Pedri and Nico Gonzalez, while Riqui Puig is only 22 years old and Frenkie de Jong is still only 24 years old.