Barcelona fear Ansu Fati has ‘made a big mistake:’ report 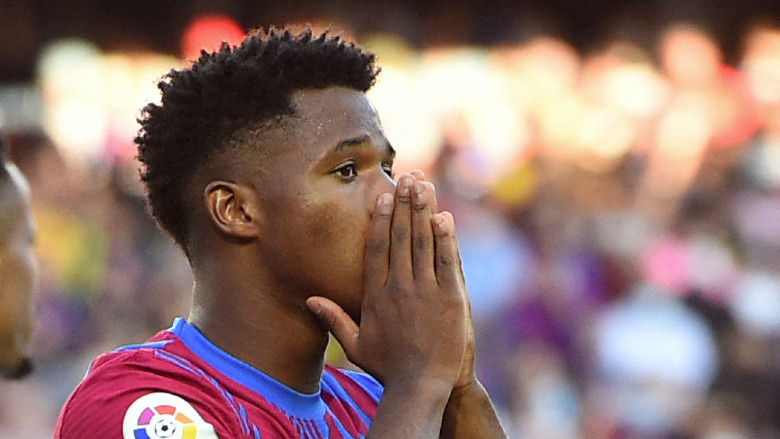 Barcelona’s teenage striker Ansu Fati has had a miserable spell over the past two seasons due to injury woes and there are growing concerns his fitness woes are still an issue.

The 19-year-old is back in action after suffering a hamstring injury but is “not yet ready to compete at the highest level” and “still a long way from being ready,” according to the reporter. Achraf Ben Ayad.

Fati opted to treat his injury conservatively rather than undergo surgery again but his decision didn’t sit well with the Catalan giants. As a matter of fact Ayad adds club fears that Fati ‘should have had’ the operation and ‘made a big mistake’.

The teenager returned in May after more than three months on the sidelines for Barcelona. He made five appearances for Xavi’s side before the end of the 2021/22 season but all came off the bench.

Fati was then called up to Spain’s squad for Nations League matches by coach Luis Enrique. However, the forward did not play a minute in Spain’s four games against the Czech Republic, Switzerland and Portugal.

Spain boss Luis Enrique has revealed his decision not to use Fati for the team’s Nations League games at a press conference ahead of his side’s game against the Czechs. The coach implied that while Fati was physically good looking, he lacked match fitness.

“I think I’ll refer to my reply when we called him after he hadn’t played as a regular for his club. I said we want to motivate him and include him in the dynamic, see what he can do on and off the ball,” he said. “I wanted to see him training with the national team and see his level. After seeing it, I’m pleasantly optimistic. The injury has healed but so far I haven’t seen him at the level I want.”

However, the former Barcelona coach went on to say he is confident the youngster will be able to return to his best and put his longstanding injury woes behind him.

“I’ve seen him do better in terms of confidence. He’s a recovered player and we treated him that way,” he added. “I have no doubts that he will return to his level. He’s a unique player. You don’t have to be in a hurry with the youngsters. Ansu has had a very difficult year.”

Fati has opened up about his injury woes and stressed how difficult he’s found the past few years. The teenager stormed onto the stage sensationally in Barcelona but was then sidelined with knee injuries that required multiple surgeries.

The attacker returned to action only to sustain a hamstring injury in January 2022. Fati told the club’s official website that it’s been a tough time but he’s focused on overcoming any challenges that came his way.

“It’s been a tough road,” he said. “But my mentality has always been to get over it. From a young age my life has been about dealing with difficulties and adversity and this will also help me to mature and grow. I work hard and try to change habits and I think that will do me good.”

Barcelona hope Fati can put his injury woes behind him next season and enjoy playing football regularly. The Catalans can check on Fati’s progress when the team return to pre-season in July ahead of the start of the new La Liga season on the weekend of August 12.