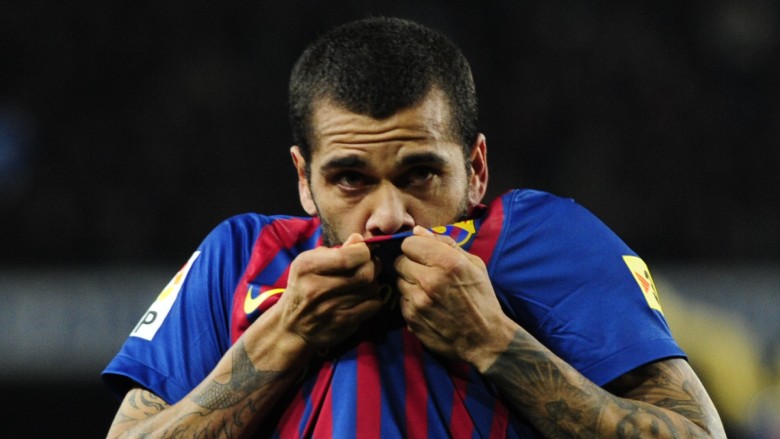 Dani Alves will wear the famous No 8 jersey for Barcelona after arriving for a second period with the Catalan giants at Camp Nou.

The Brazilian previously wore numbers 2, 6, 20 and 22 for Barcelona but will take on number 8 for the remainder of the 2021/22 season, as confirmed by the club.

The number 8 was last worn by midfielder Miralem Pjanic, who moved to Turkish club Besiktas for one season in September. Club president Ahmet Nur Cebi has claimed that the club would like to sign Pjanic on a permanent basis, as reported by Diario AS.

“Pjanic is a world class name, we would like to buy it but it depends on the conditions,” he said. “I hope the circumstances arise to keep the operation within our budget.”

Other famous names who have worn the number 8 at Barcelona include Andres Iniesta, Hristo Stoichkov, Ludovic Giuly and Brazilian midfielder Arthur Melo.

Alves is in training with Barcelona but will not be able to play any official games until January 2022. He will be unveiled as the new Barcelona player on Wednesday 17th November at Camp Nou.

The 38-year-old received a warm welcome at Camp Nou after passing a medical exam at the Catalan giants.

Barca showed how Alves met new manager Xavi, with whom he played during his first term at the club, and former team-mate Jordi Alba, with whom he will again share a dressing room.

Club president Joan Laporta also appears delighted to have Alves at Camp Nou for the second time and greeted the newcomer with a warm hug, the Barca Times reveals.

Barcelona have also provided a glimpse of what Alves can bring for the club off the pitch. The Brazilian has a lot of experience having previously won 23 trophies at Barca and should be able to provide guidance to the club’s many young stars.

Alves was seen giving some advice to his new teammates in a motivational speech prior to his first training session. The Barca players reacted with applause, as reported by Diario Sport.

“It’s a pleasure to be here after such a long time. Coming back here is an honor, a pleasure. To be able to share with you again. I come to learn from you, you are the new players in the world now. But I’m old and I want to convey one thing: to know what this club and this jersey represent, ”he said. “I’ve been abroad and this is the best place to do and live great things. You are here guess because there is nothing better out there. Insist that it is a pleasure to be here with you. Come to do great things because this club is made up of doing great things. “

Alves will be forced to watch from the sideline when Barca return to action after the international break on Saturday 20 November.

Barcelona face local rivals Espanyol at Camp Nou in La Liga and Xavi struggles with right-back as Sergino Dest is currently out. The defender has a back problem that has forced him to retire from the USMNT’s Wold Cup qualifiers against Mexico and Jamaica.