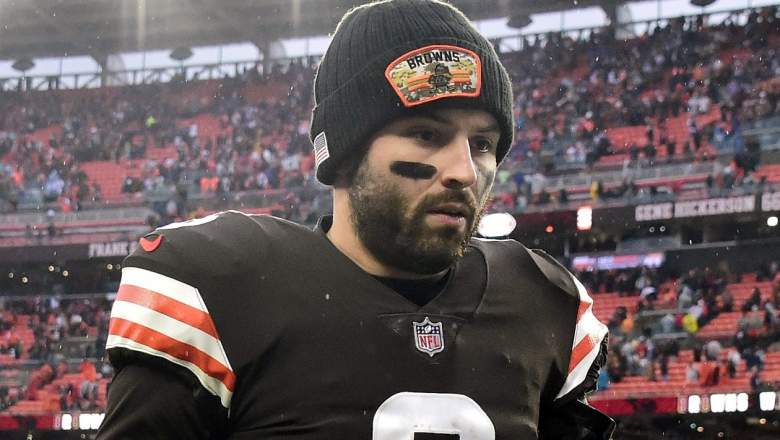 While Baker Mayfield’s split from the Cleveland Browns was a long and drawn-out affair, he admitted it came as a shock to learn he would no longer be the quarterback for the franchise that made him the No. 1 overall pick .

After backing Mayfield as a season-ending starter, the Browns aggressively pursued a trade for Deshaun Watson as his replacement. Watson eventually settled on the Browns, leaving Mayfield’s future up in the air. After months of speculation, he finally ended up with the Panthers, which gave him a fresh start and a chance at a starting gig.

Mayfield admitted the whole situation caught him off guard and he hadn’t expected to wear a different jersey this season.

“I think that’s why it came as a surprise to everyone. Pretty unexpected,” Mayfield said during his introductory press conference with the Panthers on Tuesday. “Like I said, I’m grateful for my time there. Yeah – I’d say “shocked” was pretty much the only way to describe it. But you’re rolling with the punches and you have to move forward. This is a test of adversity and how I’m going to handle it and how to move forward and be the best possible teammate.

It’s a much more balanced response from Mayfield than his original stance on the trade drama when he said he doesn’t feel respected by the way things are going.

“I have no regrets about my time in Cleveland for what I tried to give to this place,” Mayfield said. “The respect thing will all be a personal opinion. I don’t feel respected, 100%. I was told one thing and they did something completely different,” Mayfield said on an April 13 episode of “YNK: You Know What I Mean?” “I’m right in the middle of that. And you know what? I got the taste because I had four different head coaches in four years. 2021 was miserable – a bunch of different coordinators. I’m looking for stabilization right now.”

Mayfield grinned when asked if he held a grudge – which he famously has in the past.

However, the Panthers’ new QB admitted that the Week 1 matchup against the Browns will carry a little extra weight.

“I’m not going to sit here and be a robot and tell you I haven’t marked that on the calendar yet,” Mayfield said. “First of all, I’m not. For me it’s about winning games. Whoever we’ve tagged on the schedule, I’ll try to win. Of course, this one has a little more history and personal significance, but for me it’s all about winning and setting the tone for the rest of the year and however I can help this team with that, I will do it.”

There have been some scathing reports since Mayfield traded about how he was perceived in Cleveland, including a tidbit from The Athletic’s Jason Lloyd, who called the former top pick “childish”.

“Mayfield was widely viewed as childish and immature. His behavior has upset fellow players and divided the dressing room,” Lloyd wrote on July 7. “He was often difficult to train.”

There was also the situation with wide receiver Odell Beckham Jr. last season, which caused some internal tension due to OBJ’s popularity among his teammates. But Mayfield isn’t letting that get him down as he tries to start his new team on the right foot.

“There’s always a preconceived notion about everyone, maybe a little more about myself than about others,” he said. “But I’m just looking forward to getting into the building and letting the lads know how much I really love football and how much fun I’m having at it and the process. So some of that just comes with time; Some of that comes over lunch and talking to guys, not during practice. Every situation is different and I’ve always tried to be a guy who is attracted to others and up their game and who they are and just trying to make fun of people and bring out the best in them. I’ve always been like that. All you have to do is be close to the building.”

Mayfield will compete with Sam Darnold for the starting appearance in Carolina. He has said that they have already bonded and are on good terms.