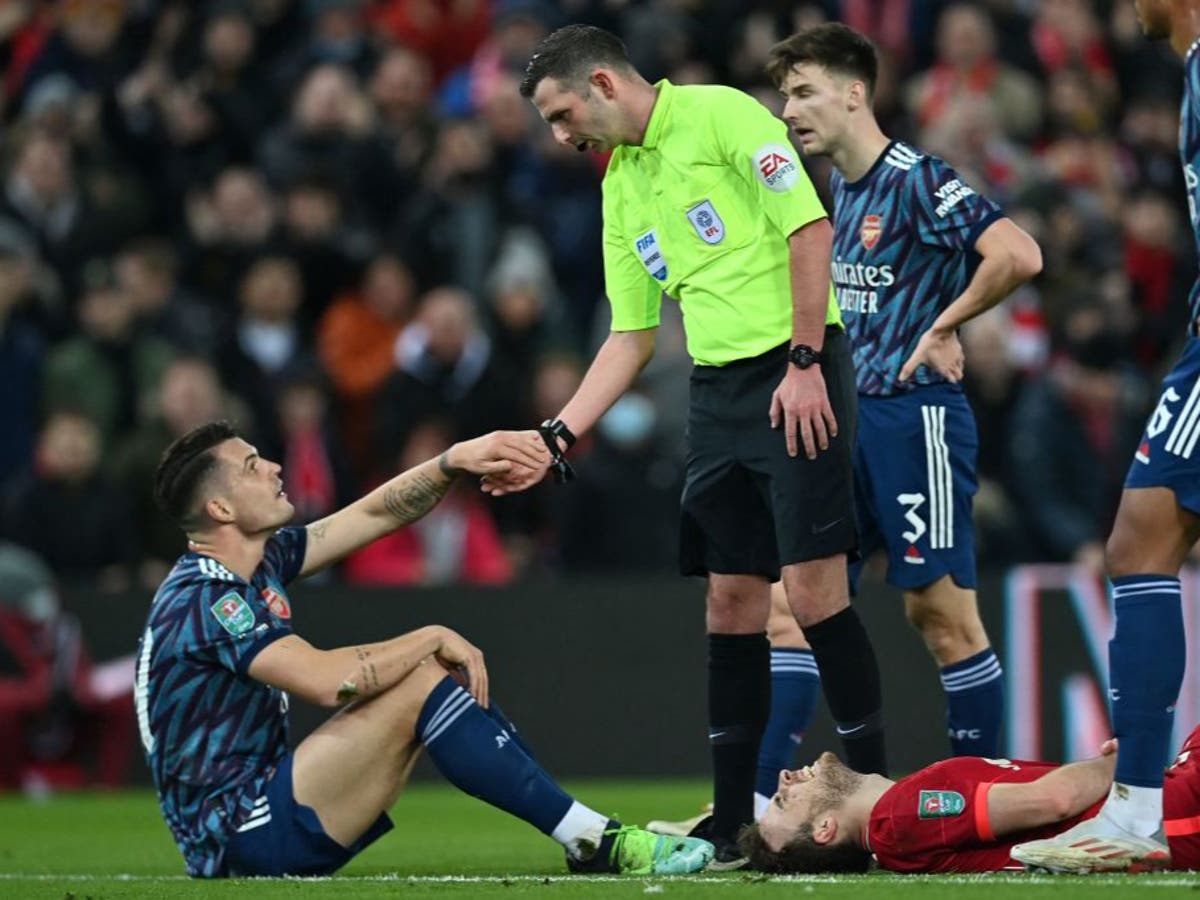 There are times when Arsenal fans have to wonder if they’re trapped in a recurring nightmare. Slowly, slowly, the stone is heaved up the mountain, but then, just as the ridge of a new horizon comes into view, the menacing silhouette of Granit Xhaka stands, hurling its foot like a sickle.

Arsenal had already arrived at Anfield with the bare bones of a squad – even before Cedric Soares suffered a hip injury in the first minute – but had somehow managed to withstand Liverpool’s initial blast just barely. Indeed, after 24 minutes the frenetic energy that swirls off the Mersey on nights like these had only just subsided, and with it the fear that a frighteningly strong Liverpool eleven could grant Jurgen Klopp’s wish to reduce that semi-final to what is effectively a one-legged tie the whole time.

But then, after Arsenal indulged a rare try into the opposition’s box, an initially slow and harmless counter-attack put them miserably out of position. The long ball sailed over Xhaka’s head towards Diogo Jota on the edge of the box and the midfielder sped off in a panic before penetrating Jota square in the chest. It was as hasty as it was ruthless in execution, and by the time Michael got Oliver Xhaka back to his feet, he was facing the sixth red card of his Arsenal career. It’s now more of a scene of horror than a real surprise.

If Arsenal’s players could have been forgiven for thinking they were going in their own lane when Liverpool’s squad list landed, they had certainly now started digging their own grave. The vultures circled: Takumi Minamino sped left into space; Jordan Henderson dictates the pace from the center circle; Roberto Firmino harassed Arsenal’s every rare touch while even Joel Matip raged up front in attack. Arsenal were forced to fight tirelessly with will and survival instincts and Mikel Arteta returned to a chain of five to stem the tide.

It seemed totally inevitable that the dam would eventually burst. That Liverpool would soon be forcing Arsenal to buckle and then the goals would flow inexorably, making next week’s second leg a pale formality. And yet, as Liverpool dominated possession, rushing forward and tirelessly searching for openings, Arsenal always found a way to mend the cracks, with Ben White in particular being as tenacious as he was tactically astute.

Had Mohamed Salah and Sadio Mane been available Liverpool certainly wouldn’t have been so lacking in killer instincts. And yet it was Klopp’s side that benefited the most from the game’s initial postponement. And as they grew increasingly frustrated, the paths of space seemed to close before them. Long passages of the game were spurned in the form of wild shots from a distance. Alex Oxlade-Chamberlain and Curtis Jones were introduced but were able to summon little magic to soften the pattern.

The crowd groaned and the tension grew, but as the seconds ticked into injury time, their chance finally fell. The ball flew around the box before falling squarely in Minamino’s path. With the goal gaping, he snapped at the rebound and the ball flew high and harmlessly over the bar. It embodied the outspoken nature of Liverpool’s night out. A team that still calls the shots with almost 80% possession and 17 shots, but is slightly – and crucially – out of sync and chewing without their two sharpest teeth.

When the final whistle blew, some of Arsenal’s players fell to the ground, the adrenaline that had kept them going quickly ebbing away. Others hugged and celebrated their performance like a victory. It was an effort, if not a goal, well worth it. If destructive red cards have become a common theme under Arteta, Arsenal’s refusal to disband felt like breaking the cycle. The rock may have fallen back down the hill, but there’s still life in the tie.