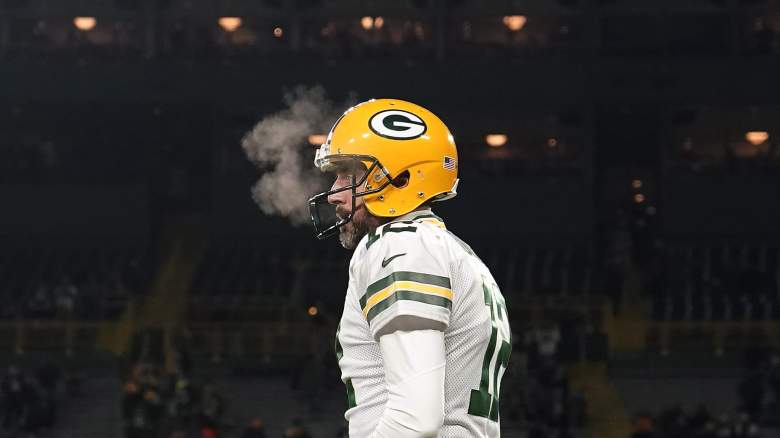 Aaron Rodgers made a shocking revelation on Wednesday that could ultimately signal big and long-term changes in the structure of the Green Bay Packers organization.

The quarterback revealed to media sources that he’s been playing his throwing hand with a fractured thumb since the team’s late Week 5 loss to the New York Giants in London on Oct. 9.

“It doesn’t make a difference if I play,” Rodgers said, according to ESPN’s Rob Demovsky. “This makes no difference. You saw the tape on my thumb. Didn’t make any difference.”

“I think I’ve had worse injuries than I’ve ever played with,” he continued. “Definitely a challenge, but the days off helped. Feeling better this week.”

Rodger’s effort to do the “right” football thing and make no excuses for a decline in both his game and his team’s is admirable, but some of the shots he missed against the Tennessee Titans last week offer evidence who contradict his claim the thumb injury didn’t harm his game.

Green Bay now holds a record of 4-7 after that loss and is 4.5 games behind the Minnesota Vikings in the NFC North standings. The improbability of making the playoffs even as a wildcard, coupled with news of Rodgers’ broken finger, raises questions about when the Packers will put their starting quarterback on hold for the season and if he’ll ever play another game in a Green Bay Uniform will start as soon as they do.

Perhaps even more surprising than the revelation that Rodgers has been playing with a broken thumb for the past six weeks is that the team has allowed him to do so. No matter how you cut it, the decision reads like a bad one.

Green Bay renewed Rodgers for the largest one-year contract in league history, guaranteeing him more than $150 million over three years. The team’s precipitous fall from three consecutive division champions and winning 13 games in each of those seasons was unexpected, to say the least. It has also prompted discussions about whether the Packers championship window has been closed.

If that’s the case, finding a trading partner to trade with Rodgers makes a lot of sense. If not, keeping him healthy for the next two years is absolutely critical to the organization’s immediate future. In any case, Green Bay have been shockingly unconcerned with the heart of their franchise for the last 15 years and are currently the most expensive player to ever pick up a football.

Whatever the Packers’ plans for 2023 and 2024, it’s about time Rodgers stepped down for the rest of this season.

Former first-round pick and backup quarterback Jordan Love has started just one game in more than two-and-a-half years in the league. Green Bay has until May next year to decide whether to accept Love’s fifth-year option. That will likely be a around $20 million decision for which the team has scant in-game data from which to draw valid conclusions.

A bad year has given the franchise the silver lining to let Love run and see who they have in the young signal caller. If the coaching staff and front office decide he’s the future, a healthy Rodgers will become a key offseason trading chip.

His contract will complicate trade talks, but discussion of Rodgers’ alleged death has been greatly exaggerated and seems even more so now that the other 31 NFL teams know he’s playing his throwing hand with a broken finger. Even so, he remains on pace for nearly 4,000 passing yards, 30 touchdowns, and a 3-to-1 ratio of TDs to INTs.

That sort of accomplishment will make Rodgers attractive to several franchises on the precipice of Super Bowl fame, or at least those who think they’re just one quarterback away from such status. Potential candidates include the San Francisco 49ers, Las Vegas Raiders, New York Jets, Indianapolis Colts and New Orleans Saints.

Green Bay may have to take a bite out of the nearly $100 million Rodgers guaranteed over the next two seasons to secure a deal, but the long-term savings and strong draft package the Packers would get in return from all of that Teams should be more than worth the financial loss on the front end.

As of Thanksgiving, Green Bay had given no indication that Rodgers would not start Sunday when the team takes on the Philadelphia Eagles to keep its narrow playoff chances alive.

That sort of accomplishment will make Rodgers attractive to several franchises on the precipice of Super Bowl fame, or at least those who think they’re just one quarterback away from such status. Potential candidates include the San Francisco 49ers, Las Vegas Raiders, New York Jets, Indianapolis Colts and New Orleans Saints.