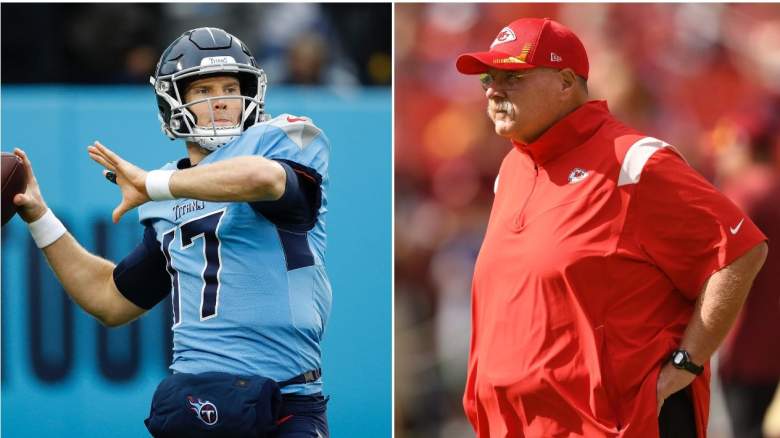 Tennessee Titans starting quarterback Ryan Tannehill made headlines May 3 when he told the Titans media he didn’t think it was his job to mentor Malik Willis, who is one of the top quarterback prospects in the NFL Draft was 2022 and Tennessee was drafted in the third round.

“I don’t think it’s my job to mentor him,” Tannehill said of Willis, “but if he learns from me in the process, that’s a great thing.”

Tannehill’s comments sparked quite a bit debate on social media whether the experienced QB disagreed with these comments or whether they were justified.

Kansas City Chiefs head coach Andy Reid was asked about his stance on Tannehill’s comments, citing his own experience of a similar situation during his coaching career.

Speaking to Colin Cowherd on The Herd, Reid supported Tannehill’s comments about his mentoring of Willis and explained the situation quarterback Alex Smith was dealing with when the Chiefs drafted Patrick Mahomes with the 10th overall pick of the 2017 NFL Draft.

“I told Alex [Smith]”Man go out there and have the best year ever and you don’t have to teach Pat anything [Mahomes]. That’s what we’re there for as coaches. You are out there producing and winning games and doing the best you can for your team. And that’s how we approached him,” Reid said on May 6.

“Well, Alex was inherently the greatest thing that ever happened to Pat Mahomes… Alex let Patrick into his world without being forced… So it worked out. I didn’t have to say much other than, ‘You go play and win games, let’s win a championship and do your best at the quarterback position.'”

After the 2017 season, which was Mahomes’ only season as Smith’s backup, the Chiefs traded Smith to the then-Washington Redskins, who ushered in the Mahomes era in Kansas City. Since then, Mahomes has been the league MVP, All-Pro, four-time Pro Bowler, has competed in four straight AFC Championships and two Super Bowls, winning one.

Rookie mini camp for the Chiefs was held May 7-9. Reid shared his thoughts on how the three-day event went for Kansas City’s young players and the benefits it offered them.

With Rookie Minicamp officially over, next on the Kansas City offseason schedule are Organized Team Activities (OTAs) taking place May 25-26. After a three-day break, the team will meet again for more OTAs from May 31st to June 2. Their final OTAs will be from June 7th to June 10th.

After the OTAs, the Chiefs meet for the last time before summer break for the mandatory mini-camp on June 14-16.