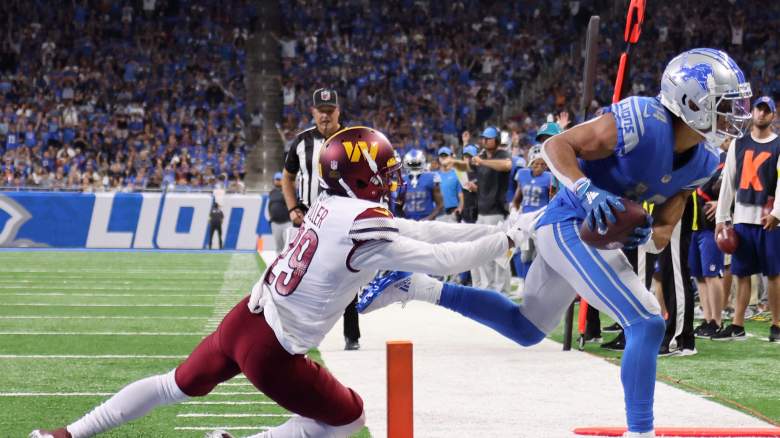 The Detroit Lions got off to a sizzling start to the 2022 season on the offensive side of the ball, and their receivers are a major reason for that.

So far the Lions have pulled out some elite playmakers from that position and in Week 2, Amon-Ra St. Brown was the leader of the pack in that regard.

St. Brown enjoyed a great week, and now he’s enjoying the spoils of it after receiving a major NFL honor for his work. St. Brown was named NFC Offensive Player of the Week.

To see St. Brown earn this honor is significant for the Lions. The team have been looking for big-play weapons of late and St. Brown has managed to deliver that advantage since coming on as a substitute at the end of the 2021 season.

With his first two appearances in 2022, St. Brown has made it clear he’s here to remain a threat to the roster and offense. In Week 1 he went for 64 yards and a touchdown. Week 2 saw him total 116 receiving yards and two touchdowns in addition to 68 rushing yards.

If those stats don’t show the type of player primed to become a serious threat in the NFL to take home awards, nothing is going to happen.

Early in the first half of week two, St. Brown emerged and made a big play for Detroit’s offense, catching a pass to get the team going and put the Lions in the end zone.

It wasn’t just that game for St. Brown, however. Later in the fourth quarter, he caught a touchdown to put Detroit’s lead a little further.

In addition to these plays, St. Brown easily blasted for a 58-yard run which was also very impressive.

Overall, this was a definite coming out party for St. Brown to become an NFL star. Overall impact was perhaps the main reason he took home that honor this week.

Most people realize that St. Brown is becoming a huge star for the team, and those efforts could be just the beginning in terms of his prominence in the sport in 2022.

It’s clear the Lions will be looking to get the ball to move their offense, and that’s true regardless of who else the team has added or what weapons they might have on this side.

As the Lions have shown, they can still target St. Brown a lot on offense, which could give him plenty of chances to make big plays for the team. He could continue to show in a big way, making him an elite option on the field, which many see him doing in Detroit this year.

If he can do that, it would be easy to see St Brown becoming a star player and someone to receive many more of those awards for his work on the pitch in the days to come.

Don’t expect this to be the last time St. Brown takes home a massive NFL award in his career or even in 2022.

Don’t expect this to be the last time St. Brown takes home a massive NFL award in his career or even in 2022.