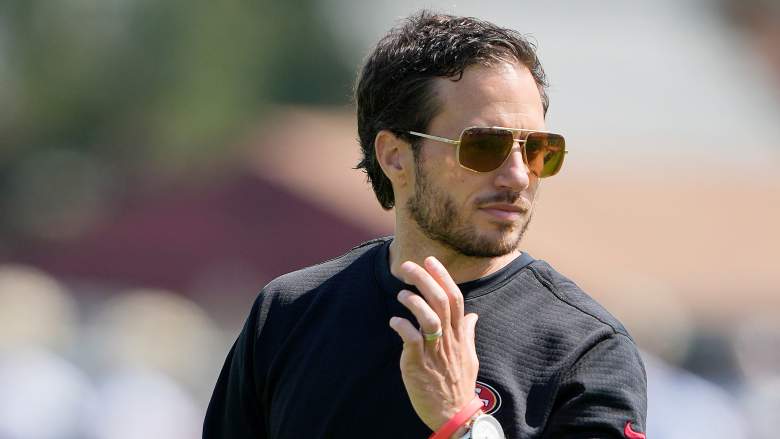 As the San Francisco 49ers prepare for their first playoff game of the year, many other teams are gearing up for new head coaches.

One of them is the Miami Dolphins, who chose to fire Brian Flores after their 9-8 season. As Heavy previously wrote, last Tuesday the Dolphins asked to interview 49ers offensive coordinator Mike McDaniel.

Prior to Wednesday’s media availability, there was no direct response from McDaniel regarding interest in the position. ESPN’s Nick Wagoner reported that the young offensive coordinator has only one focus: the Dallas Cowboys.

That’s exactly what San Francisco fans want to hear as the team prepares for the road trip to Dallas. McDaniel is also setting the precedent that he probably won’t be interviewing for a head coaching position until the playoff run is over, which could mean the Dolphins or other potential suitors find their next HCs before he gets an interview.

The Niners would prefer parity and keep McDaniel close, but it will be quiet and important history in the background for the next few weeks.

Another topic raised during McDaniel’s media presence was wide receiver Deebo Samuel. Deebo has seen more action than his previous two seasons, and the 49ers put more effort into giving him the ball.

This was mainly due to the rushing attack. Samuel has 365 rushing yards with eight touchdowns per PFR this season. According to Cam Inman, says McDaniel that the expanded role is because Deebo earned it.

“We’ve learned this year, ‘Hey, this guy can handle more in our system and we can find different ways to get him football’ because he’s really special at it,” McDaniel told media.

It paid off as Samuel amassed 1,710 total yards and 14 touchdowns, the most in either category on the team. McDaniel and the 49ers will need him to play a major role again in this Sunday’s wild card game against the Cowboys.

After former defensive coordinator Robert Saleh accepted a head coaching job with the New York Jets in 2021 and former OC Mike LaFleur followed him to New York, San Francisco head coach Kyle Shanahan would rather keep his boys this offseason.

But he may not get what he wants. With McDaniel already being solicited, and the current DC DeMeco Ryans likely getting interviews as well, Shanahan knows they could be leaving California in the near future.

“I do not want to lose [DeMeco Ryans] not yet,” Shanahan told NBC Sports’ Jennifer Lee Chan. “Hopefully they keep him here for me and the Niners for a few more years, but I know he’s ready and I feel the same about Mike [McDaniel].”

With Ryans and McDaniel aged 37 and 38 respectively, they are still very young by traditional standards. However, Shanahan and names like Los Angeles Rams head coach Sean McVay have shown younger coaches to thrive in the league.