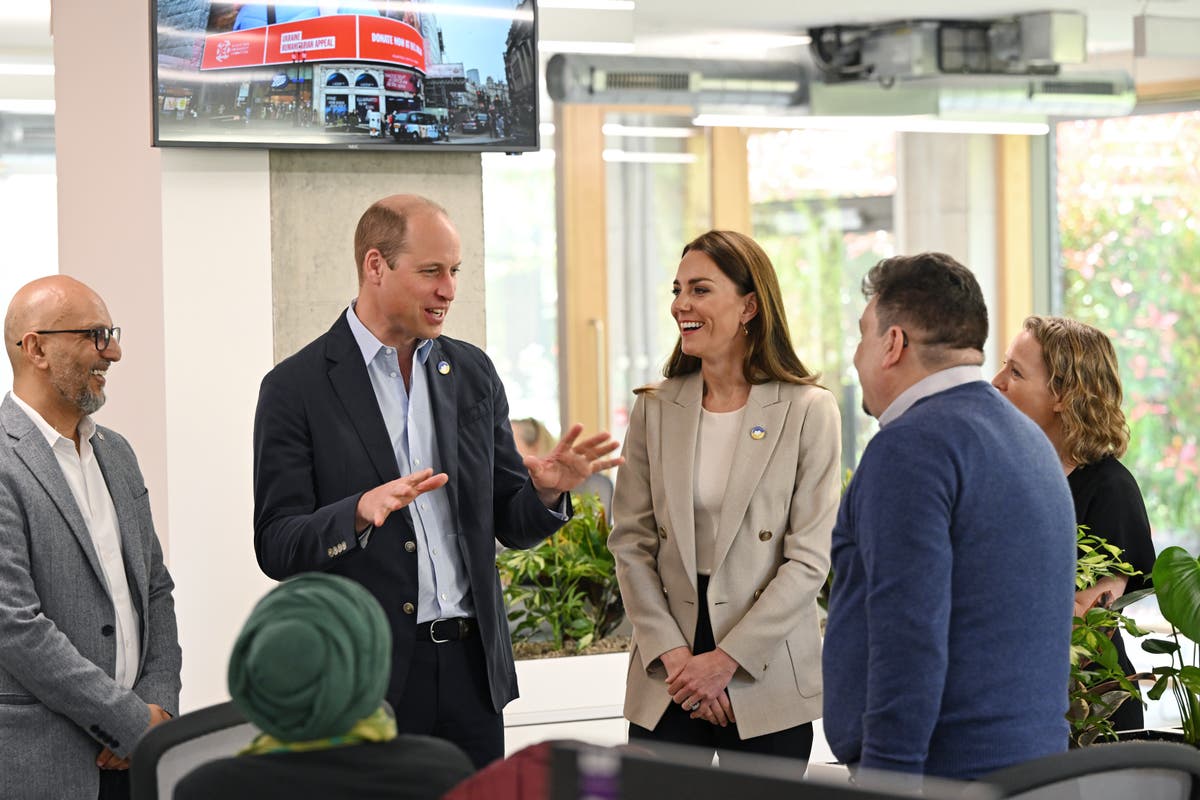 The Duke and Duchess of Cambridge have pledged to make a second donation to the Disasters Emergency Committee appeal in Ukraine as they praised the DEC’s “incredible” total, which has surpassed £300million.

William and Kate applauded the generosity of the British public, with the Duke highlighting how the enormous sum was raised amid the difficult financial situation of many.

During a visit to the DEC’s London offices, the Duke told staff seated at their desks: “We said against the backdrop of the cost of living crisis you raised £300m in eight weeks – that’s incredible.”

The couple video-chatted with senior aides from DEC affiliates, who painted a bleak picture of the situation in Ukraine.

Rachel Cummings, Save The Children’s health director, phoning from a sidewalk cafe between Kyiv and Lviv, told the royals “the scale and complexity of the crisis is challenging”.

In a personal conversation with a group of helpers who had returned from the region, William brought the sobering conclusion: “We need fewer disasters in the world”.

DEC Chief Executive Saleh Saeed said after the visit: “They were very excited to see how the appeal was going and were thrilled to hear that we were going to raise over £300m and cemented in their minds the goodwill, the response and the generosity of the British public.”

He added the couple were so “thrilled” after their visit that they “planned” a second donation after attending the appeal earlier in the year.

Mr Saeed said: “I think people have obviously been moved by what they’ve seen on the news and they want to help and people are feeling helpless in a way.

“The need in Ukraine and the surrounding countries is huge. The £300m is obviously a huge amount of money and we are very grateful for that, but we also have to remember that there are other crises around the world.

“And while the focus remains on Ukraine for the moment, we still have an appeal open in Afghanistan which has raised £44m, we are concerned about the famine in the Horn of Africa, global hunger is rising and the World Bank has issued a warning today rising food prices could push millions into poverty.”

William and Kate received a private briefing on the work of the DEC when they first arrived at headquarters near Islington.

The umbrella organization of 15 leading UK aid organizations is supporting some of the seven million internally displaced Ukrainians and the five million who fled the country after the Russian invasion.

The couple then took part in a video call with three helpers – Ms Cummings from Save The Children; Giuliano Stochino Weiss, Head of Emergency Response for Hungarian Interchurch Aid, one of Christian Aid’s partners, who is in Lviv; and Alexander Matheou, Special Representative of the Red Cross of the International Federation in Ukraine, who is in Vinnitsa.

William asked the group, “I just want to get a little bit of what the scene is like, what the situation is out there… what are you seeing at the moment and how are things on the ground?”

Mr Stochino Weiss told them: “I entered Ukraine on the third day of the conflict, it was really heartbreaking to see mothers and fathers and children, fathers saying goodbye to their children because they had to leave the country.

“Lviv used to be a safe city, that changed on Monday with the massive rocket attacks 4 km from the office, so the situation is constantly changing and I would say it’s getting worse.”

Ms Cummings told William and Kate how she was in Ukraine for about three weeks, traveling between Lviv and Kyiv and to Odessa: “There is a major population displacement going on and Save The Children is deeply concerned about the children affected by this crisis.

“The numbers are staggering, around three and a half million children are now refugees. It is a challenge for us to support and scale this.”

The Duke asked the group of high-level aides: “We have been watching and hearing a lot about Mariupol and what is happening, which sounds like a really terrible situation. Do any of you have any idea how bad it is and have any of you been able to get help?

Ms Cummings replied: “I met the deputy mayor of Mariupol who was just telling us some horrific stories of people who have left and people who have not been able to leave.

“It’s a very challenging issue and it’s a high priority in the news, but Mariupol-plus is the challenge because there are other areas in Ukraine that may not be as badly affected but where people are in need.”