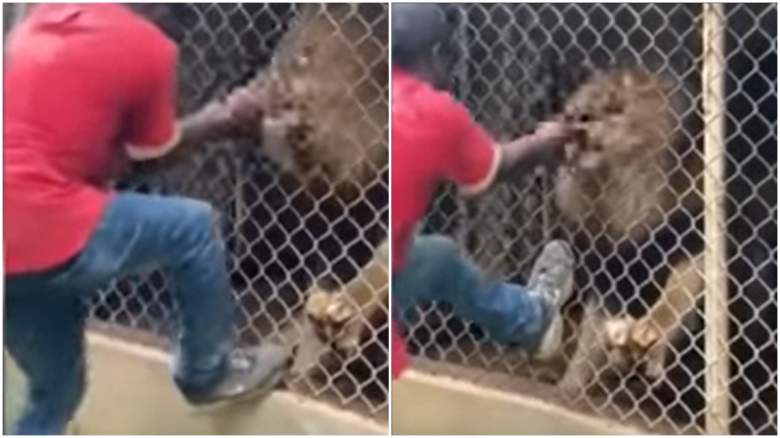 Video shows the moment a lion bites a man’s finger at a zoo in Jamaica.

You can watch the video later in this article. It shows the moment when the lion grabs the man’s finger and doesn’t let go.

In the short video, the man sticks his fingers through a fence, on the other side of which sits the large lion. The man seems to be trying to pet the lion or otherwise get the creature’s attention. This works, but maybe not in the way he intended, as the lion eventually catches the man’s finger.

After a brief fight between the lion and the human, the human falls to the ground. Other people have their phones out and are watching and filming the incident.

“When it happened, I thought it was a joke. I didn’t take it seriously. I didn’t realize how serious it was because it’s their job to put on a show,” a witness told the Jamaica Observer, who reported the man’s right ring finger was bitten off.

“Of course, when he fell to the ground, everyone knew it was serious. Everyone panicked,” she added to the website. The woman told the Jamaica Observer: “All of the skin and about the first joint of his finger was gone. I ran away from the whole thing because I don’t want to see blood and it was too graphic for me.”

The zoo is located in St. Elizabeth, according to the Jamaica Observer, and zoo officials have released a statement showing the man in the video is a contractor.

“The actions shown in video by a Jamaica Zoo contractor are tragic and do not represent the safety procedures and policies that must be followed at all times at Jamaica Zoo,” the press release reads in part, according to the news site.

“It is an unfortunate event that should never have happened and we, the Jamaica Zoo family, are doing all we can to help the Lord move forward. We hope you continue to support Jamaica Zoo. We have been and will continue to be a safe place for you and your family,” the press release said.

The news site reported that the lion “severed” the man’s finger, shocking visitors who witnessed the incident. The video has gone viral online and on Google. The man’s name was not released.