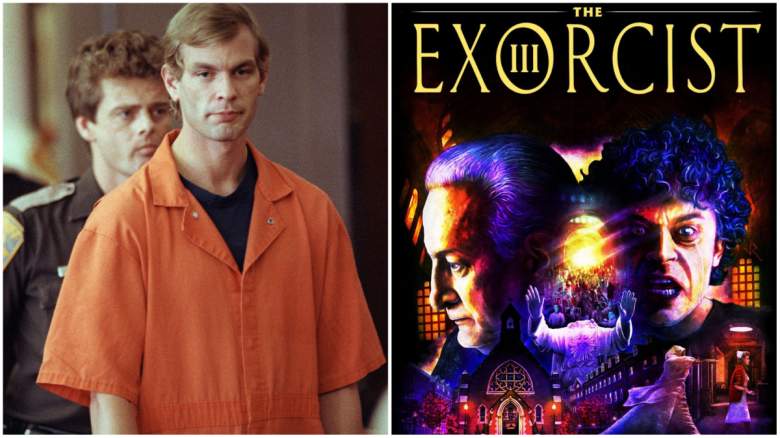 In the new Netflix series about serial killer Jeffrey Dahmer, viewers are told that Dahmer was obsessed with the movie Exorcist III.

In fact, on the show, Dahmer plays the film for Tracy Edwards, a man he lured back into his apartment. But Edwards escapes and leads the Milwaukee police back to Dahmer’s hideout.

Is that true? Was Exorcist III really Dahmer’s favorite movie?

The answer is yes. This scene in the Netflix show is taken directly from Edwards’ trial testimony.

What is the movie about? According to Rotten Tomatoes:

In his trial testimony, Edwards revealed that Dahmer sang while watching “Exorcist III” and that he became obsessed with a certain scene in it.

Edwards went into great detail about his real-life encounter with Dahmer.

He testified that he and his friends met Dahmer while drinking beer. He started talking to them, saying he was a professional photographer, and eventually offered Edwards $100 to photograph him at his apartment.

He wanted Edwards to pose for “nude” photos.

“I didn’t know exactly what it was. He told me a sewer pipe broke and management would take care of it,” Edwards testified.

Dahmer brought Edwards a beer and then rum and coke. He raised fish in his tank. Edwards turned right to view the aquarium. “Suddenly handcuffs and a knife are pulled on me.” Dahmer put the handcuff on his left wrist.

That’s where the movie comes in.

Edwards testified that there was a television in the room and the film Exorcist III was playing on a VCR in the back bedroom at the time.

They both sat on the bed. Dahmer held the handcuffs and had the knife pointed at his side.

He said he wanted to leave and was considering jumping out the window. Talking to him, he tried to let Dahmer know, “I was his friend.”

Edwards said for a minute that Dahmer was nice. He then said he didn’t want people to leave or let him down. “Sometimes he wasn’t himself. Sometimes he was like a nice guy. He came and went at different times.” He was silent and sometimes watched the film.

He began rocking and “singing” during certain parts of the film.

Edwards couldn’t understand what he was saying. He sang “on and off throughout the ordeal.”

Dahmer was most interested in the scene in the film about the preacher being possessed, said Edwards, who testified that the serial killer was “interested in that part.” That part got his attention more than anything.”

That kind of film, certain parts, “interested him. It was as if he had changed at times with it. He would get more aggressive.” He would try to cuff Edward both of them, wanting to feel dominant. He wanted Edwards face down.

“I lay on my side. God told me not to lay flat and let this person tie me up, so I didn’t.”

He laid his head on Edward’s chest. “Like he listened to my heart because at that point he told me he was going to eat my heart.”

Edwards unbuttoned his shirt to make Dahmer more comfortable and sat on the couch.

Dahmer started singing again, so Edwards said he needed to go to the bathroom. He hit him and he ran away. “I took the chance. At least I’ll die trying. I won’t just sit here. I hit him and ran…I made it out.”

This all accurately reflects the Netflix scenes. In real life, Edwards was stuck in Dahmer’s apartment for four hours.

He told a Milwaukee police officer that “this freak, this nutcase tried to hurt me.” The officers went into the apartment and arrested Dahmer.

A 2001 Associated Press article, accessible through Newspapers.com, reported that Edwards escaped Dahmer’s hideout when the serial killer was not looking. A handcuff “was still dangling from his wrist” when he stopped police.

A 1992 Associated Press article said that Edwards testified that he fled Dahmer’s apartment “after seeing a head in the fridge and a hand Dahmer took out of a filing cabinet.”

He said Dahmer started singing when they saw the “Exorcist” and “put his head on Edward’s chest to hear his heartbeat.”

“He made me look in the fridge,” Edwards testified, according to the AP.