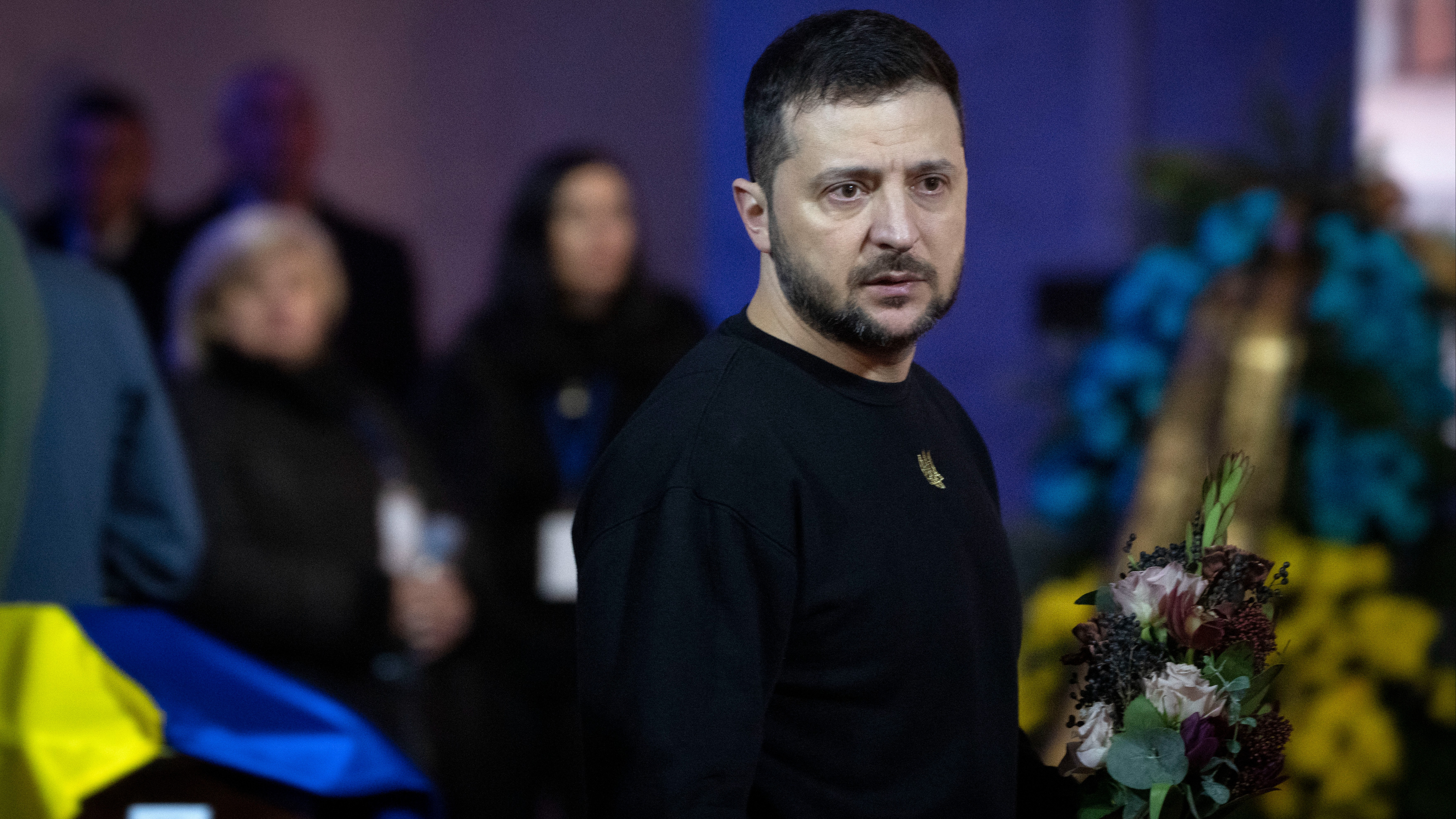 The helicopter carrying Interior Minister Denys Monastyrskyi and other senior officials hit a kindergarten building in a residential suburb, killing him and about a dozen other people, including a child.

Mr Monastyrskyi, who oversaw the country’s police and emergency services, was the most senior official to be killed since Russia invaded Ukraine last February.

His death, along with the rest of his ministry’s leadership and the entire helicopter crew, marked Ukraine’s second major disaster in four days after a Russian missile struck an apartment building in the southeastern city of Dnipro, killing dozens of civilians.

At the sombre service in Kyiv, Mr Zelenskyy and his wife placed flowers on each of the seven coffins draped in his country’s blue and yellow flags.

The Ukrainian guide then spoke briefly to the families while a small orchestra played.

The cause of the crash is not known, but Mr Zelenskyy said it happened because the country is at war. This view was echoed by Ruslan Stefanchuk, Speaker of the Ukrainian Parliament, after the service.

“All of this would not have happened without this terrible and undeclared war that the Russian Federation is waging against Ukraine,” Mr Stefanchuk said.

“So we must remember and not forget these people. Because for Ukraine and Ukrainians, every lost life is a great tragedy.”

Russia’s War in Ukraine is “in a state of impasse” with Ukrainian forces likely to make small headway in the north-east near the city of Kreminna, according to the UK Ministry of Defense (MoD).

In its regular intelligence update, the Defense Ministry said Russian forces “probably rebuilt” in the eastern city of Soledar after taking it earlier in the week.

“There is a realistic possibility of local Russian advances” around Bakhmut, an eastern city whose capture would give the Kremlin a long-awaited victory after months of battlefield setbacks, the defense ministry added.

The update comes as senior US officials have reportedly advised Ukraine to wait until the latest shipment of American weapons is ready and training has been conducted before launching a major offensive against Russian soldiers.

Asked if he supports Poland’s goal of sending German-made Leopard tanks to Ukraine, US President Joe Biden said, “Ukraine will get all the help it needs.”

The President’s statements were made in connection with a ongoing dispute over sending tanks from western allies to support Ukraine.

On Friday, more than 50 defense leaders in Germany failed to meet to reach an agreement on the tanks – blocked by Berlin’s apparent hesitation.

Other important developments in the war in Ukraine:

Fierce fighting raged around Bakhmut and three civilians were killed by Russian shelling in that area of ​​eastern Donetsk region, the deputy head of the Presidential Office of Ukraine reported on Saturday morning.

In total, five civilians have been killed and 13 injured by Russian shelling in the past 24 hours in eastern and southern Ukraine, where active fighting is ongoing, Kyrylo Tymoshenko said in a Telegram post.

Ukrainian forces repelled Russian attacks in Bakhmut and other parts of the country’s contested east overnight, the military said in a Facebook update on Saturday morning.

A 60-year-old woman died after Russian shells hit her home in the northeastern Kharkiv region, local governor Oleh Syniehubov said in a Telegram update. He added that four other people were injured in the province.

He said 21 towns were attacked and two other civilians were injured.