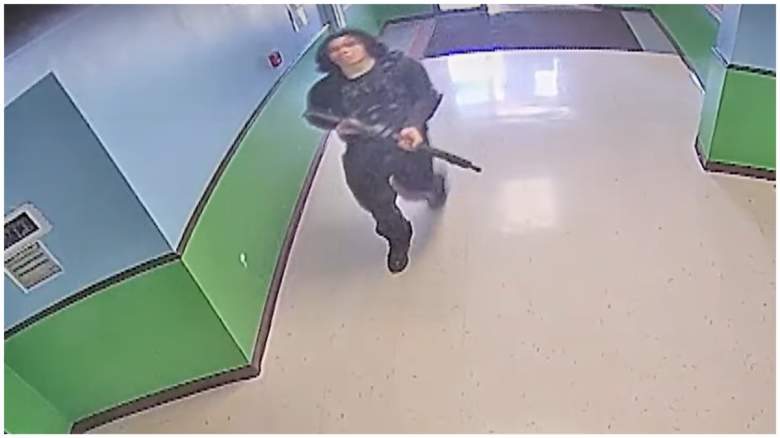 Full video of the mass shooting scene in Uvalde, Texas, including footage from inside the school, has been released. You can watch the video below, but be aware that it’s graphic and disturbing.

Much of the video, which is more than an hour long, shows numerous police officers waiting in a hallway. Law enforcement officials have been heavily criticized for not immediately going to the classroom where suspected gunman Salvador Ramos was holed up with children.

The video begins outside Robb Elementary School and shows Ramos walking to school before entering and walking down a hallway armed. A young boy, who cannot be identified, ran from the shooter but it doesn’t appear Ramos saw him.

The Austin American-Statesman, who also received the video, wrote: “The shooter enters one of the classrooms. children scream. The gunfire continues, stops, and then starts again. Stops, then starts again. And again. And again.” The newspaper noted that officers had gathered in the hallway to do everything from talking to texting without immediately entering the classrooms.

Screams erupt as the gunman started shooting at a classroom and then went inside. The video also shows officials being shot at. Then they go back and stand in the hallway.

According to KVUE-TV, the officers did not enter a classroom for more than 70 minutes.

Javier Cazares, whose daughter was among the victims, expressed outrage at the video leak, according to CNN.

“We were supposed to be shown some footage of the shoot in the hallway on Sunday and then we got a call, another parent got a call saying someone had gotten their hands on it. It was published and leaked. They didn’t have our permission to do it,” Cazares said, according to CNN.

State Assemblyman Dustin Burrows, chairman of the House of Representatives committee dealing with the Uvalde shooting, tweeted, “It is my intention to show the hallway video to the people of Uvalde, regardless of any agreement. I will not release it to the public until the people of Uvalde have seen it for themselves.”

The statesman reported that the classroom was unlocked, although authorities initially said they were waiting for keys.

According to the Statesman, the video is “part of the investigation file” and “contains security video footage from a nearby funeral home showing the shooter arriving at the school by wrecking a pickup truck in a ditch and includes audio of 911 calls and officers speaking in the hallway.” , and the sound of gunshots.”