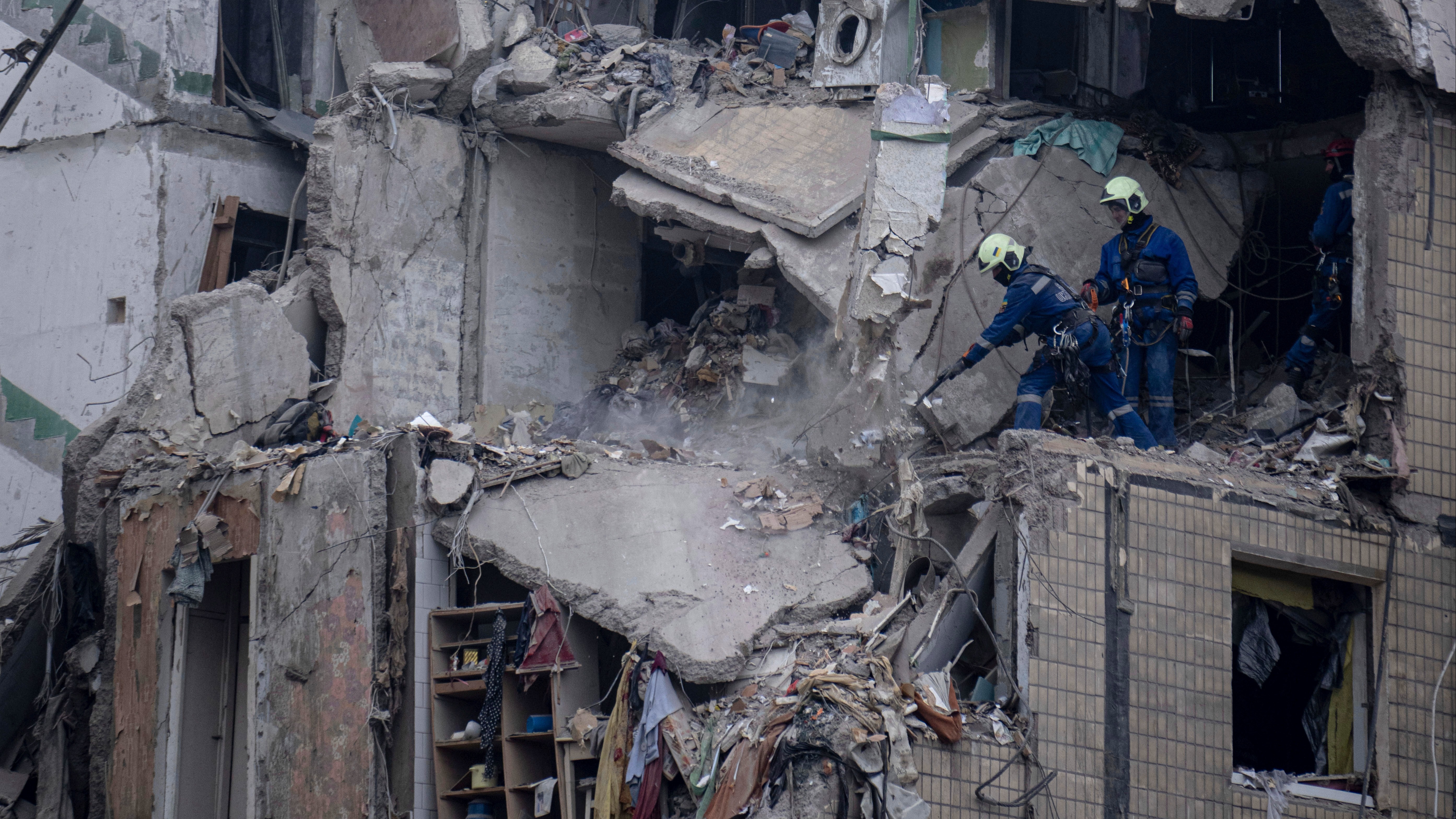 Thirty people remained missing Monday as rescuers continued to search the rubble of the building for victims and survivors.

About 1,700 people lived in the block of flats. The local authority said 39 people were rescued and at least 75 injured.Oleksander Anyskevych said he was in his apartment when the rocket hit.“Boom – and that’s it. We saw that we were alive and that’s all,” Anyskevych said Monday as he went to the site to inspect his destroyed apartment.

He told The Associated Press that he knew people who died under the rubble. A classmate of his son lost her parents.

European Union foreign policy chief Josep Borrell called the strike and others like it “inhumane aggression” because it was aimed squarely at civilians. “There will be no impunity for these crimes,” he said in a tweet on Sunday.

Kremlin spokesman Dmitry Peskov insisted that the Russian military was not attacking residential buildings, implying that the Dnipro Building was hit as a result of Ukrainian air defense actions.

The Institute for the Study of War, a Washington think tank, reported signs the Kremlin is taking steps to turn its invasion of Ukraine into a “major conventional war” after months of embarrassing military setbacks.

It comes as the UK has confirmed Sending hundreds more armored vehicles to Ukraine, including Challenger 2 tanks.

Explaining the package in the House of Commons on Monday, Defense Secretary Ben Wallace said: “Hundreds of other armored and protective vehicles will also be sent, including Bulldog, a £28million maneuver support package with minefield breaching and bridging capabilities, and dozens of other unmanned aerial systems worth of £20 million in support of Ukrainian artillery.

The Kremlin has sought to downplay the importance of Britain’s move to supply increasingly advanced weapons in support of the resistance.

Rishi Sunak signed a pledge to send 14 British Army Challenger 2 main battle tanks and about 30 AS90 self-propelled guns to Kyiv during talks with Ukraine’s leader Zelenskyy over the weekend.Next month will mark the first anniversary of Putin’s invasion, in what the Kremlin calls a “special operation.”

I’m a size 4 and my girlfriend is a size 18 – we both tried the Skims bodysuit, it really fits everyone

I’m a size 4 and my girlfriend is a size 18 – we both tried the Skims bodysuit, it really fits everyone