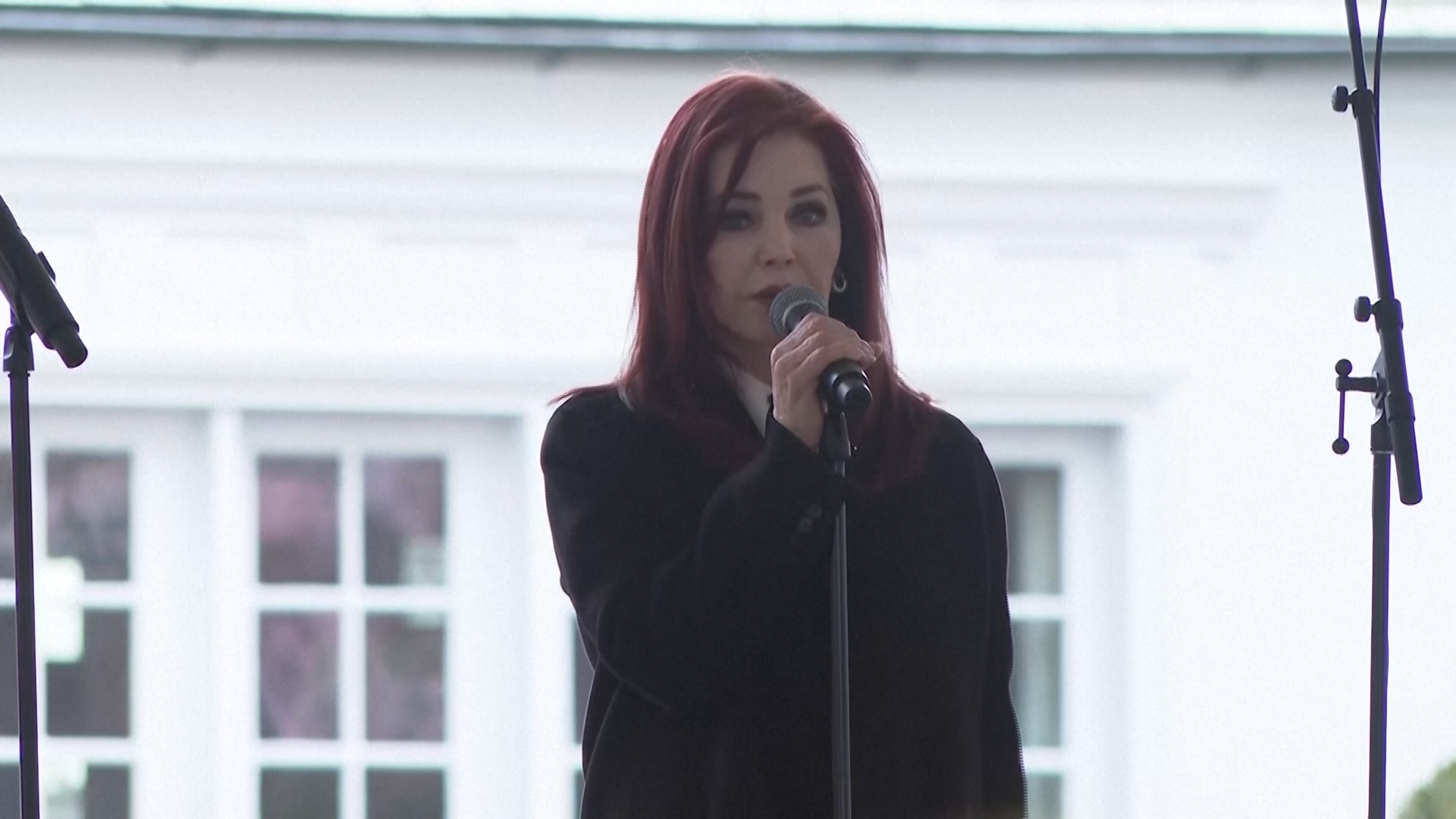 Priscilla Presley paid an emotional tribute to her late daughter Lisa Marie Presley on Sunday as hundreds of mourners gathered at the memorial service at Graceland to remember her life.

For years, the sprawling estate has been the destination for those paying tribute to Lisa Marie’s famous father, Elvis, who died in 1977 and is buried with other members of the Presley family on the 120-acre estate.

but after her death on Decthe iconic home in South Memphis, has become a place where mourners have gathered to pay tribute to the singer-songwriter.

The service was held on the front lawn of the famous estate and the public was invited to attend the event, with an online live stream also available.

Priscilla Presley thanked everyone who came to honor her daughter who was Elvis Presley’s only child. Lisa Marie died at the age of 54 after being rushed to the hospital.

She is survived by daughter Riley Keough, a 33-year-old actress, and 14-year-old twin daughters Harper and Finley Lockwood.

Priscilla Presley read a poem to her granddaughter, daughter of Lisa Marie, which said: “I have no idea how to put my mother in words, the truth is there are too many.

“Lisa Marie Presley was an icon, a role model, a superhero for many people around the world.

“But mom was my icon, my role model, my superhero and so much more than just one.”

A poem by Lisa’s other daughter, Riley, was also read, which read: “I hope I can love my daughter like you loved me. How you love my brother and sisters. Thank you for giving me strength, my heart, my empathy, my courage, my humor.

“We are you. You are us, my eternal love. I hope you finally know how much you were loved here. Thank you for trying so hard for us. If I haven’t told you every day, Thanks.”

Sarah Ferguson, the Duchess of York, was also among those who paid tribute to Lisa Marie, calling her “Sissie” as she offered her support to the late singer’s children.

She said, “Sissie, this is with affection for you. My late mother-in-law used to say, “Having nothing to say can begin to take away the anguish and pain of those moments because grief is the price we pay for love,” and how right she was.

“Today we are talking about Lisa Marie. We consider Priscilla to be the mother of Lisa Marie. We look at Lisa Marie and say you lost a son. Mothers lose children, there are no words for that.

“So today we’re talking about action and action is the way we can move forward, we can light the flame so for Riley, Harper and Finley and for the whole family we march forward to support you, all of us with you and we will help you as best we can. If you just stretch out your hand, we’re there.”

“Grief is the price we pay for love”: The Duchess of York gave a heartfelt tribute to Lisa Marie

The former Memphis mayor, meanwhile, recalled the “tough times” the city faced when Lisa Marie was born in 1968, but how important her birth was in that moment.

The only daughter of the King of Rock and Roll, he described her as “the link to the throne” and “the keeper of the flame”.

Wharton added, “I don’t know much about Hollywood, I can’t speak for New York or any other city Lisa has spent time in, but I can tell you that Lisa Marie was that city’s precious jewel.”

The service also included a number of musical tributes, including one from Alanis Morissette, who provided an emotional rendition of her song Rest.

Members of the public were invited to attend the service but were also encouraged to donate to the Elvis Presley Charitable Foundation in lieu of flowers.

The foundation provides support to various charities, particularly in the arts, education and children’s programs in the Memphis/Whitehaven area.

At a pre-ceremony event, she said she was “overwhelmed” by the film and the impact it had. “I’m very proud and I know my dad would be very proud … I’m overwhelmed with gratitude,” she said.

Lisa Marie is buried at Graceland next to her son Benjamin Keough, who died in 2020 at the age of 27. The Los Angeles County coroner ruled his death a suicide.

Following in her father’s footsteps, Lisa Marie pursued a career in the music industry, releasing three albums; To Whom It May Concern in 2003, Now What in 2005 and Storm & Grace in 2012.

In 2018, she was featured on a new record entitled Where No One Stands Alone, released to celebrate her father’s love for gospel music, and included 14 original performances recorded by him.