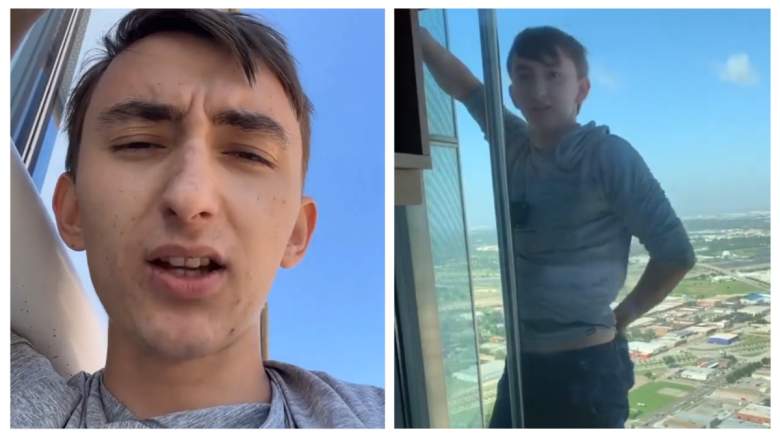 Maison Des Champs is a Nevada man known as “Pro Life Spiderman” who climbed Devon Tower in Oklahoma City, Oklahoma. You can watch videos of the stunt later in this article.

“Great teamwork today from all our first responder partners who helped with the climber at Devon Tower” The Oklahoma City Police Department wrote on Twitter.

The incident occurred on Tuesday, June 14, 2022. According to WFAA-TV, the Devon Energy Center skyscraper is 50 stories tall.

“Out Here in the Devon Tower, Oklahoma City”, Des Champs says in a video shows his ascent to the tower. In this video, he makes it clear that his goal is to spread an anti-abortion message.

“Let them live,” he said elsewhere. He asked people to donate to help “save a baby.”

Des Champs posts videos on his TikTok page, which goes by the name @prolifespiderman.

The Oklahoma City Police Department tweeted, “We are aware that a person has climbed the Devon Tower in the city centre. Please avoid the area, our officers have closed roads near the site as a precaution.”

Captain Valerie Littlejohn said in a press conference that shortly after 8:40 a.m., police received a report of a person climbing the side of the building. Security precautions were taken to close the streets. Officers and firefighters tried to persuade Des Champs to come down. He climbed to the top of Devon Tower and was taken into custody.

She declined to confirm the motive. “It was difficult to watch someone especially at that altitude,” she said. “Luckily he made it to the top without falling and injuring himself.”

A few years ago, someone else climbed Devon Tower while it was still under construction and the base jumped off, Littlejohn said.

Des Champs has climbed towers in other cities.

According to NPR, Des Champs climbed to the top of the New York Times Building in Manhattan in early May 2022.

Two days earlier, he was arrested “after climbing the Salesforce Tower in San Francisco alone,” the site reported.

In New York, the police didn’t respond and he ran 52 floors down the stairs to escape after finishing the climb while hanging a banner on the building that read, “Abortion kills more than 9/11 every week!” NPR reports.

He was also arrested while boarding the Aria Hotel in Las Vegas, Nevada to protest the COVID-19 restrictions, NPR reported.

According to NPR, Des Champs is a “22-year-old finance student at the University of Nevada Las Vegas who enjoys spending his free time hunting and rock climbing.”

He has a website prolifespiderman.com where he encourages people to donate to anti-abortion groups. He is also on Instagram.

“My name is Maison Des Champs,” he wrote on this website. “I’m a rock climber who recently started scaling skyscrapers to protest abortion. The goal is to raise $1,000,000 for pro-life charities and inspire young people to speak out against abortion. I’ve always wanted to climb for pro-life charities, but when I heard news from Dr. When I heard Cesare Santangelo, I felt compelled to act.”

The National Catholic Register reported that “pro-life advocates continue to call for an investigation into the deaths of five aborted babies whose bodies were recently obtained by pro-life activists Lauren Handy and Terrisa Bukovinac.”

Some Republican congressmen have called for an investigation and have written,

Des Champs answers some frequently asked questions on its website. He wrote:

“America’s Got Talent” on NBC: Who is Nicolas Ribs? French magician and TF1 Diversion star audition for show

“America’s Got Talent” on NBC: Who is Nicolas Ribs? French magician and TF1 Diversion star audition for show