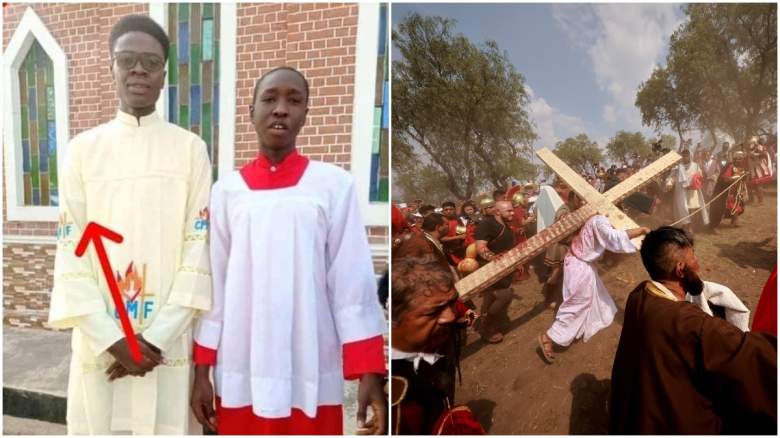 A student in Nigeria named Sule Ambrose has died during a re-enactment of Jesus’ crucifixion.

According to the BBC, Ambrose, who wanted to be a priest, died during an Easter Passion Play, but his cause of death is unclear. A witness reported that he was bleeding.

Ambrose died while “attending a re-enactment of Jesus’ crucifixion,” Fox News reported. The death reports appear to be true; They have been reported by credible media outlets in the UK, Nigeria and the United States.

Luminous Radio Gboko, which posted photos of Ambrose on Facebook, gave his name as Sule Ambrose and wrote that his last words were, “I will die with you.” Some sites spelled his name as Suel Ambrose.

BBC reported that Ambrose was studying at the Claratian Institute of Philosophy to become a priest. According to the BBC, he collapsed during the play and was taken to hospital, where he later died

Vanguard reported that 25-year-old Ambrose performed in the play “in Nekede in the Owerri West Local Government Area of ​​Imo State.”

The Passion Plays showed the crucifixion and resurrection of Jesus Christ as part of traditional Easter celebrations.

According to Vanguard, a person at the university named Micheal Eluwa claimed Ambrose said “fell down and after a while started bleeding while acting in The Passion of Christ drama.”

The website reported that the incident happened on Good Friday in April 2022.

“When the incident happened, everyone got together and rushed the deceased to a school hospital and later, when the case worsened, he was taken to a Fast Federal Medical Center, FMC. From there we heard he wouldn’t survive,” Eluwa told Vanguard.

“When it happened we initially thought it was a joke and part of the drama. When he couldn’t get up we knew it was serious business and he was taken to the hospital.”

Chukwuemeka Iheme was named as the school’s official, who said the school will deal with the death at a later date, according to Vanguard.

The Guardian Nigeria reported that Ambrose was a philosophy student.

This site reported that Ambrose “fell to the ground after the biblical scene in which he cuts off the ear of one of the soldiers to prevent Jesus’ arrest.”

According to the Guardian, Ambrose’s friends said he said he “loudly” said he wanted to be a priest when he finished his current degree.