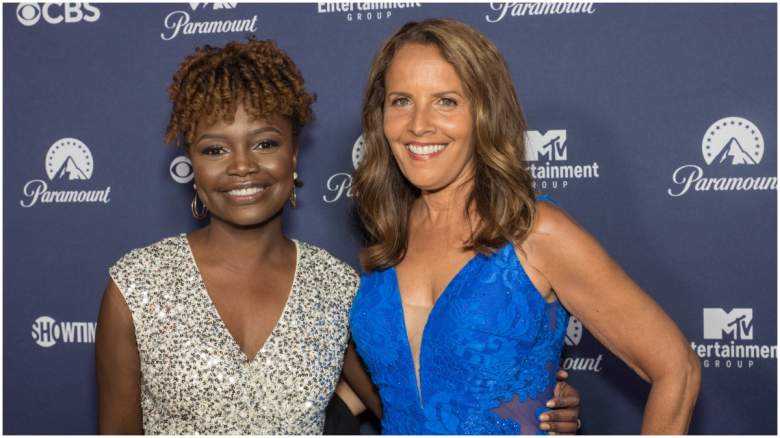 Is Jean Pierre married? No, but she’s in a long-term relationship with her partner, who is CNN’s national correspondent Suzanne Malveaux.

Their careers brought Malveaux and Jean-Pierre together. According to Jean-Pierre’s 2019 memoir, Moving Forward, the couple met at the 2012 Democratic National Convention in Charlotte, North Carolina.

Malveaux attended in her role as a CNN reporter, as noted in her CNN bio. Jean-Pierre worked for President Barack Obama’s re-election campaign as director of political strategy for battleground states, Ballotpedia reports.

As of 2019, the couple was not married. In her autobiography, Jean-Pierre referred to Malveaux as her partner, not as her wife or spouse.

As the New York Post reported, Jean-Pierre added a message of gratitude to the book: “First of all, I want to say that every word of this book was written with love for my partner Suzanne Malveaux and our daughter Soleil Malveaux Jean-Pierre. You are my life.”

Malveaux and Jean-Pierre adopted their daughter Soleil in 2014. CNN host Wolf Blitzer announced the happy news during an episode of “The Situation Room” on June 3, 2014. According to a CNN transcript of the show, the couple adopted their baby girl at birth:

In her memoir, Jean-Pierre wrote that Malveaux made it “crystal clear” from the start of their relationship that “she wanted to be a mother.” Malveaux publicly celebrated her daughter with a tweet on May 27, 2016, which read: “Celebrating the greatest blessing that came into my life 2 years ago today. Every day bring you a new joy. Happy Birthday!”

Malveaux and Jean-Pierre are raising their daughter in a suburb near Washington, DC. Jean-Pierre mentioned in her memoirs “the suburban house in Maryland” that she shares “with Suzanne and Soleil.” Jean-Pierre referenced the convenience of the family home’s location when she worked as national political director for Martin O’Malley’s 2016 presidential campaign; She noted that the campaign’s headquarters in Baltimore is 45 minutes from her home.

Montgomery County, Maryland, property records list Malveaux as the sole owner of their single-family home. According to online records on the Maryland Department of Assessments and Taxation website, she purchased the property in 2014 for $1.1 million.

Malveaux has a long history dabbling in politics through her journalism career. As explained in her CNN bio, she was a White House correspondent for more than a decade. She reported on Presidents Bill Clinton, George W. Bush and Barack Obama. She has been with CNN since 2002 and is now the national correspondent.

CONTINUE READING: What did President Biden’s father do for a living?