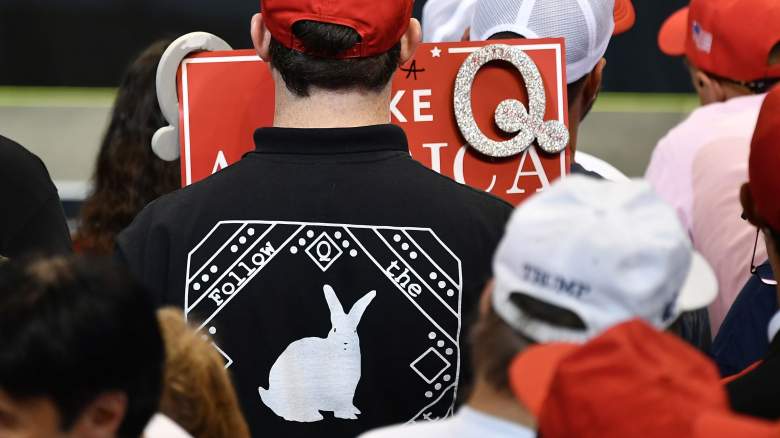 Igor Lanis killed his wife and wounded his daughter in a shooting at their Michigan home before he was shot dead by police in Walled Lake on Sunday, Sept. 11, 2022, the Oakland County Sheriff’s Office said in a statement .

His other daughter took to social media after the incident to reveal that he was “obsessed” with QAnon and conspiracy theories and lost touch after former President Donald Trump lost his 2020 reelection bid. Rebecca Lanis said that her father always dealt with mental health issues, but recently things have gotten worse.

“He had a sense of reality. But then after 2020, when Trump lost, he started going down these crazy rabbit holes,” Rebecca Lanis told The Daily Beast. She added that he was “fascinated” by the QAnon conspiracy theory and believed President Joe Biden stole the election. “It’s a very big contribution to what happened,” she told The Daily Beast.

Lanis, 53, shot and killed his wife, 56-year-old Tina Lanis, and wounded their 25-year-old daughter, Rachel Lanis, at their Walled Lake home, according to the Oakland County Sheriff’s Office. He also killed the family dog. Rebecca Lanis, 21, told The Daily Beast that she lives at the house but is staying with friends over the weekend.

The sheriff’s office said Lanis’ daughter called 911 after she was shot around 4 a.m. Deputies and officers from the Walled Lake Police Department arrived at the home and Lanis exited the home with a shotgun and shot her. The officers and deputies returned fire and killed Lanis, Sheriff Mike Bouchard said.

The Oakland County Sheriff’s Office said in a release that dispatchers received an 911 call at 4:11 a.m. from a “young woman who said she had just been shot by her father.” The sheriff’s office said the caller was unable to provide any further information, including the location of the incident, before the call was completed.

“Our dispatch triangulated the area of ​​the call and approximately 4:16 a.m. officers from the Walled Lake Police Department and the Sheriff’s Office arrived in the area,” the release said. “They heard a shot and approached the house. The suspect, later identified as Igor Lanis, a 53-year-old man, exited the address’s front door, presented a Remington 870 pump-action shotgun and fired at officers. The Walled Lake Police Officer and an Oakland County Sheriff’s Deputy returned fire, hitting and fatally wounding the suspect.”

The home is on Glenwood Drive, the sheriff’s office said. “Officials observed the 911 caller/victim, a 25-year-old woman, at the front door of the relevant address attempting to crawl out of the home. They dragged her to safety. She stated that her father shot her and her mother. She was taken to a nearby hospital and underwent emergency surgery. She was originally listed in critical condition but was placed in stable condition after surgery.”

According to the sheriff’s office, “A search of the home revealed a deceased 56-year-old woman who was shot multiple times in the back and appears to have attempted to escape through the front door as well. Also the family dog ​​who was shot and killed multiple times.”

In her Reddit post on the QAnonCasualties subreddit, titled “My Qdad grabbed and killed my family this morning.” Rebecca Lanis wrote, “Yep. The internet ruined him. Growing up, my parents were extremely loving and happy people. I have always had a special bond with both of my parents. In 2020, after Trump lost, my dad started going down the Q rabbit hole. He kept reading conspiracy theories about the stolen elections, Trump, vaccines, etc. He always said he wanted to keep us safe and healthy.”

She added: “It just kept getting worse and he snapped at us verbally a couple of times. Nothing physical though. He has never come into physical contact with anyone. Well around 4am on September 11th he had an argument with my mother and he decided to take our guns and shoot her, my dog ​​and my sister. My mother succumbed to her wounds and my sister is in the hospital right now. My father also fired back at the cops and they killed him.”

She wrote on Reddit: “I’m shocked and I don’t even know what to say. Fuck you Qanon. I hope the FBI gets a tighter grip on you and your minions roast in prison (and hell) for poisoning so many people.”

In comments to her thread, she explained why she posted about it, writing, “I just want to spread the word about extremism. … I want the media to yell Q because this is all their fault.” She wrote, “I’m with my grandparents, we honestly can’t even believe that actually happened.”

Rebecca Lanis told The Daily Beast it’s become “pointless” to argue with her father. There have been several violent incidents related to the QAnon conspiracy. In 2021, a California father, Matthew Taylor Coleman, told federal authorities he killed his children after being “capped” by QAnon.

In 2019, Buckey Wolfe, a QAnon adherent, killed his brother with a sword after he thought he had turned into a lizard, Seattle authorities said. That same year, Anthony Comello was accused of killing a mob boss in New York and appeared in court with a QAnon reference in hand.

Rebecca Lanis, who was at a friend’s house by “sudden luck,” spoke to The Detroit News on the night of the shooting and said her father had recently fallen down a “rabbit hole.” She said he’s “always been prone” to mental illness, “but it really got him down reading all these weird things on the internet.”

“Nobody could talk him out of it,” she told the newspaper. … It’s really so shocking, but it really can happen to anyone. Right-wing extremism is not funny and people have to look after their relatives and if they have guns they have to hide them or report them or something because that’s out of control.”

Rebecca Lanis told Click On Detroit, “He started reading about the stolen election and Trump, and then he started delving into it, and then when the vaccines came out and COVID, he started to do all of that read.

She told the news channel: “In 2021 I could see him starting to spin. Then, in 2022, he was completely whirled out of the deep end. Every conversation we had he had to bring up vaccines or COVID or 5G or EMFs or anything or just about anything ridiculous you can think of. If any of you have such relatives, you need to start monitoring them. If they have guns you should hide them or something because these people are dangerous.”

Igor Lanis and his wife have lived in the Walled Lake home since 1996. Few other details about his life were immediately available, and Heavy was unable to locate any social media accounts linked to him or his family. He previously lived in West Bloomfield, Michigan.

According to The Detroit News, officials said Lanis does not appear to have a criminal record and has not been the subject of protective orders. Sheriff Mike Bouchard told reporters that Lanis had been “more excited” over the past year.

On Reddit, Lanis’ daughter wrote: “I guess it was just bad luck because I stayed at a friend’s house that night. I could have died too. I’m so freaking mad at everything.” She wrote, “We were religious. Q dissuaded my father from our religion, but my sister and mother and I always prayed together. I believe that God has a plan for me and that I will not be the next victim of what is actually a demonic Q cult.”

Rebecca Lanis said on Reddit: “He would spend all day and night reading stuff on his phone and laptop and would get really mad about the smallest things. His carefree and fun ways were gone. He started talking about how 5g and EMFs were bad and modern medicine was a sham. It’s like being possessed by a demon.”

In a Reddit comment, she said, “I kept getting warning signs from him, so I slowly started to distance myself. Unfortunately, my sister and mother were too loving to believe that he could actually lash out like that. Dear readers, please do not be afraid to break off contact and ask for help before it is too late.”

The sheriff’s office said in its press release, “An additional investigation by the Oakland County Special Investigations Unit in conjunction with the Walled Lake Police Department is ongoing.”

Sheriff Mike Bouchard told Fox 2 Detroit: “This is an incredibly horrific act. It’s so sad on so many levels, but because of the response and professionalism of our dispatch, Walled Lake officers and the Oakland County Sheriff’s Office Deputy were able to rescue at least one victim. We will be actively seeking information to gain insight into what set this in motion.”

Bouchard said the daughter’s 911 call was “terrifying” and that she suffered “super traumatic injuries” to her back and legs. He told reporters at a news conference that a neurologist had been called in to assess her injuries. Her sister said on Reddit, “She’s in stable condition, but there’s a chance she won’t be able to move her legs.”

Rebecca Lanis told WXYZ about her father: “He became a different person after 2020 when Trump lost. … online extremism, QAnon, right-wing extremism. … I think people need to focus more on radicalization, Qanon. And if they have relatives with guns who are like that, you have to help them and they have to be put in a mental institution, even if you don’t think they’re dangerous.”

Bouchard added, according to The Detroit News, “I think there was danger for everyone. He had his keys with him so who knows where he was headed. …This is terribly sad on so many levels.”