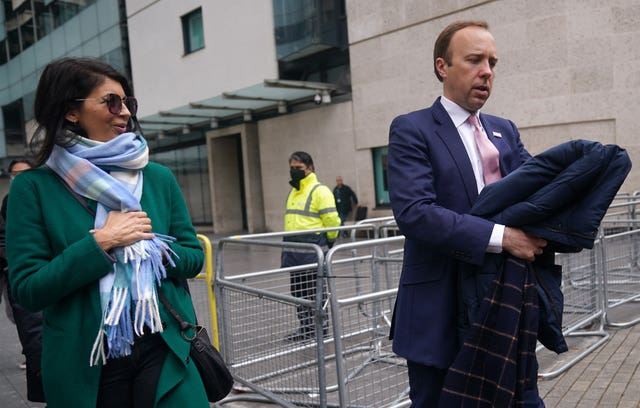 The former health secretary also discussed his dyslexia for the first time on the show after claiming he was using his platform to raise awareness.

Ms Colandangelo and royal Zara Tindall were among the housemate partners who sent letters into the Australian jungle to boost attendee motivation.

As the Latest Page News reality show hit the two-week mark on Sunday, housemates were offered the chance to win personal messages from their nearest and dearest.

To reach the prize, the roommates were divided into three groups and given 60 minutes to balance 10 blocks on a beam.

Those whose blocks were balanced at the end of that time would receive a letter from home.

Mr Hancock received a letter from Ms Coladangelo, who he was caught using last June to break coronavirus social distancing rules when they were pictured having an affair at his ministerial office, which eventually led to his resignation as Minister of Health.

Scott read the letter, which said: “Dear Matt, wow, watching you in the jungle was quite an experience.

“We are particularly impressed that you have overcome your fear of snakes.

“When we dance, we’re less sure.

“Although we saw that you almost got the electric slide thanks to Scarlette. Gina xxxx”

The letter referred to Hancock’s attempts at the club’s favorite line dance.

Mr Hancock also spoke about life with dyslexia while chatting with his roommates about their accomplishments in life.

Under fire for his decision to take part in the reality show following his handling of the pandemic, Mr Hancock said he will use the “incredible platform” to raise awareness of dyslexia, a type of learning disability.

He insisted it was “not the check” that made him want to be on the show.

Speaking to housemates, comedians Babatunde Aleshe and Seann Walsh, about their experiences at school, the MP opened up about his experiences with dyslexia.

He said: “I really wanted to learn. I could do a page in math and I couldn’t in English.”

Walsh asked, “Are you talking specifically about reading?”

Mr Hancock replied: “Yes. And the moment I was identified as dyslexic at university, it was, ‘Ahh, well actually I’m okay with the language, it’s just that my brain works differently and I can work on that’.”