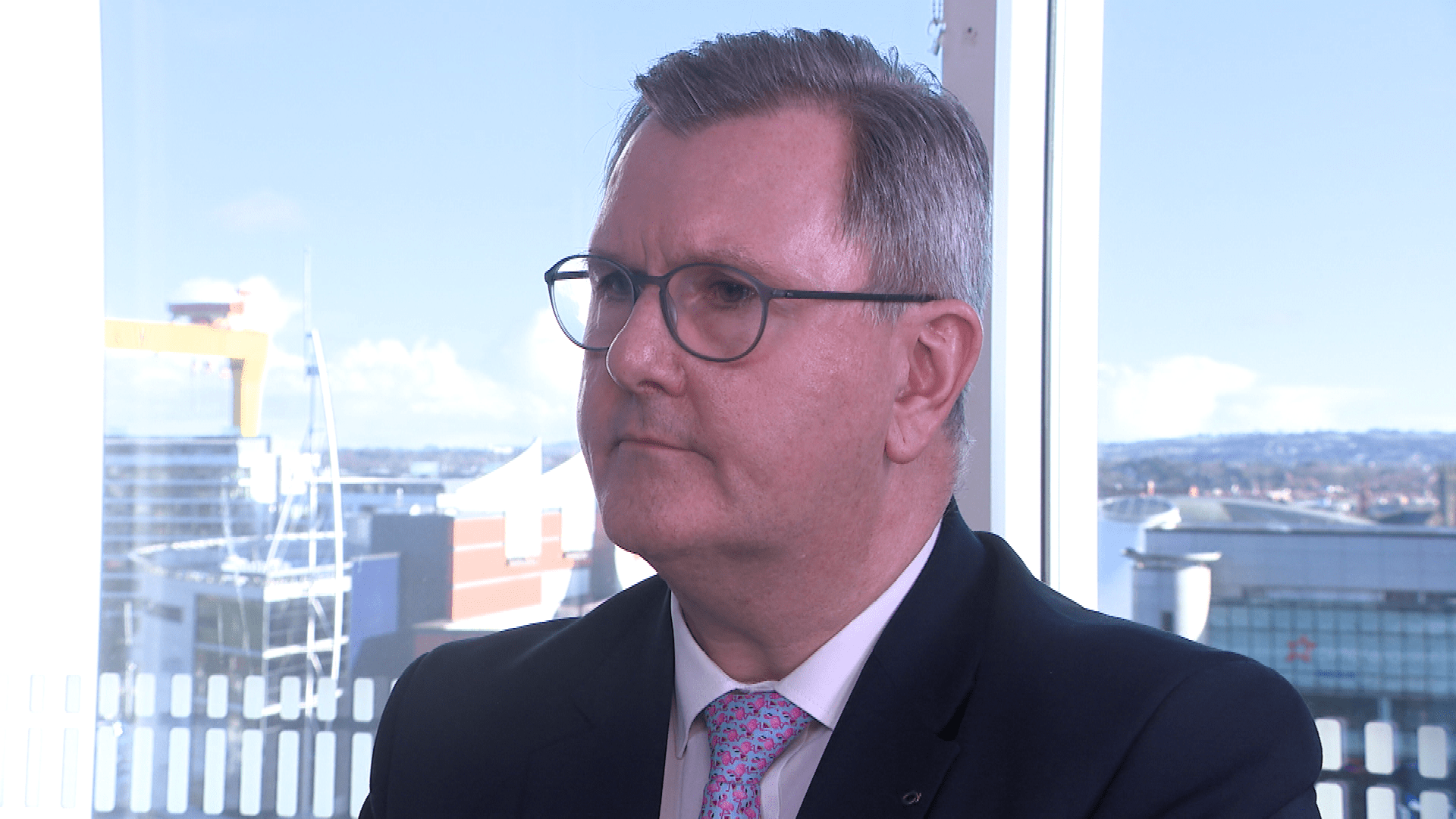 In a sit-down interview with UTV Political Editor Tracey Magee for View from StormontSir Jeffrey Donaldson said he wanted to work with other unionists to reach an agreement they could all support.

He said: “What is important to me is greater unionist unity and cooperation to stand up for the union and uphold Northern Ireland’s place in the UK.

“But ultimately, if we get an agreement or legislation in Westminster that meets our seven tests, we will not be afraid to stand up and say this is the right thing to do and we will call on unionists to support that.”

In July 2021, the DUP boss set out seven tests he says must be passed if his party is to support the government’s plans for the Protocol.

Sir Jeffrey Donaldson said they must include a promise that no checks on goods of any kind will be sent from the UK to Northern Ireland.

Asked about the government’s decision to take responsibility for the construction of so-called border posts between Britain and Northern Ireland, the DUP leader said he thinks “the government is wrong”.

“Because when it comes to the implementation of the current protocol agreements, we are firmly and vehemently against it,” he said.

“We have consistently opposed and will continue to oppose any action aimed at harmfully implementing and imposing the Protocol on Northern Ireland.”

Sir Jeffrey added: “If the Government is under the illusion that imposing a deal on Northern Ireland without the support of unionists will create the kind of basis to restore decentralization here and achieve the stability that we need on a community-wide basis , then I’m afraid that’s just not the case.

“We need a result here that trade unionists can support.”

The interview was conducted on Monday afternoon when the UK and European Union released a joint statement stating that the two have agreed to continue “scoping work” to resolve the post-Brexit Northern Ireland Protocol disputebecause, despite talks, gaps remained in their positions.

Sir Jeffrey said it was a “long road to travel”.

Ahead of their virtual meeting on Monday, there had been speculation that the two sides were heading towards a breakthrough, but Downing Street said there were “gaps left”.

“When we met James Cleverly in Belfast last week,” said Sir Jeffrey Donaldson. “It was clear to me that there was still a significant gap between Great Britain and the EU.

“I am therefore not surprised that we are unable to provide any sort of substantive statement at this time. I think there are still some very important issues that need to be resolved in these negotiations.”

In response to the suggestion that the DUP is lurching to the right to please TUV leader Jim Allister and loyalist blogger Jamie Bryson, Sir Jeffrey said the idea “simply isn’t based on reality”.

“I don’t need anyone to hold my hand,” he said. “I am quite capable of standing on my own two feet with my party and sticking to the mandate given to us.

“Who gave us this mandate? It wasn’t TÜV, it wasn’t anyone else. The mandate was given to us by the people who voted for this party to stand up and stand up for unions.”

He added: “I’m proud of the stance we’ve taken. It was difficult. It was a challenge.

“But I believe that in the end it will be good for Northern Ireland if we get the outcome we need and it will restore stability in decentralization which will have the support of trade unionists.”

The Northern Ireland Protocol was agreed by Prime Minister Boris Johnson in 2019 to break the Brexit impasse.

To avoid a border between the Republic and Northern Ireland, customs and food safety controls and processes were moved to the Irish Sea, creating economic and administrative barriers to the movement of goods between the UK and NI.

The protocol is vehemently opposed by many unionists and the DUP is blocking the work of a devolved government in Stormont in protest at the agreements.