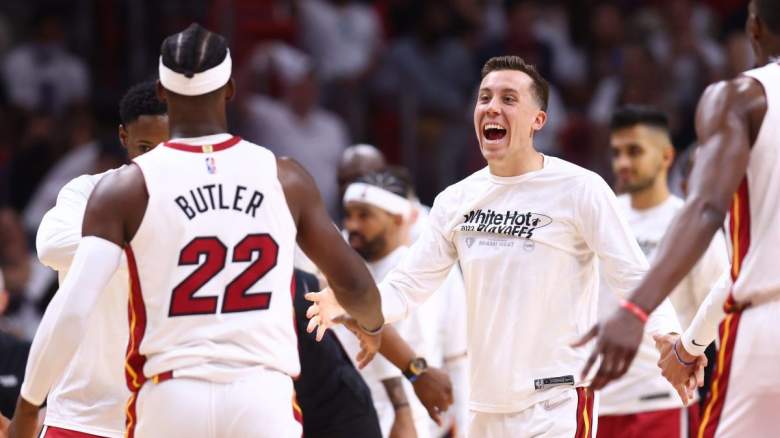 Duncan Robinson is one of many examples of how the Miami Heat found a diamond in the rough. The forward quickly found himself in the Heat’s rotation and was impressed enough to land a five-year, $90 million contract with the Heat. However, in the season after Robinson signed that contract, he slipped out of Miami’s starting rotation and didn’t get playoff minutes.

Despite a bad year for Robinson, the sharp-shooting forward recently spoke about his off-season and the steps he was taking to improve, as shared by Anthony Chiang of the Miami Herald.

The Heat forward spoke to Chiang about spending his free time in self-reflection, where he gained perspective and also sought the true opinions of others.

“Just try to take a step back and keep some perspective,” Robinson told the Miami Herald earlier this offseason at an event promoting SIQ Basketball, makers of the first FIBA-approved smart basketball. “I think in the early days after the season it’s important to take a step back and reflect and not get emotional or reactionary about anything. Be able to step back a little and just look at it from a very objective point of view about what needs to happen going forward. I feel capable of that, but I also have people in my corner who can really help me with that because that’s a big part of it. Sitting together and having really honest conversations with people and getting really honest feedback.”

Robinson mentioned how the time off and the honest feedback has helped him continue to grow into a better person and player.

“It’s been great to be able to just take a little step back, try to get perspective on last year and see where I’m at and how I can strategically move forward and move forward,” Robinson said of this offseason. “Yeah, just super stuck and focused on just trying to improve in certain areas and develop as a player. First of all, to understand that this time it’s all about self-improvement and just getting better. Excited to have such a long stretch of time where you can really just be strategic about investing time and energy in the right places.”

After being eliminated in the Eastern Conference Finals, the Heat are coming back with much the same core as last year. As well as being personally motivated, Robinson spoke about how he feels the Heat as a team is using the loss to propel them into the upcoming season.

“I think how last season ended [with a loss in Game 7 of the East finals]’ Robinson said, ‘I think the motivation for everyone across the board is obviously super high.’

Miami’s season kicks off Monday at the FTX Arena for the team’s media day before training camp opens in the Bahamas on Tuesday. After that, with the preseason and NBA regular season fast approaching, the Heat are hoping to stay in contention for the title.