‘Child’s play’: The world’s tallest skyscraper farm is to be built in Great Britain 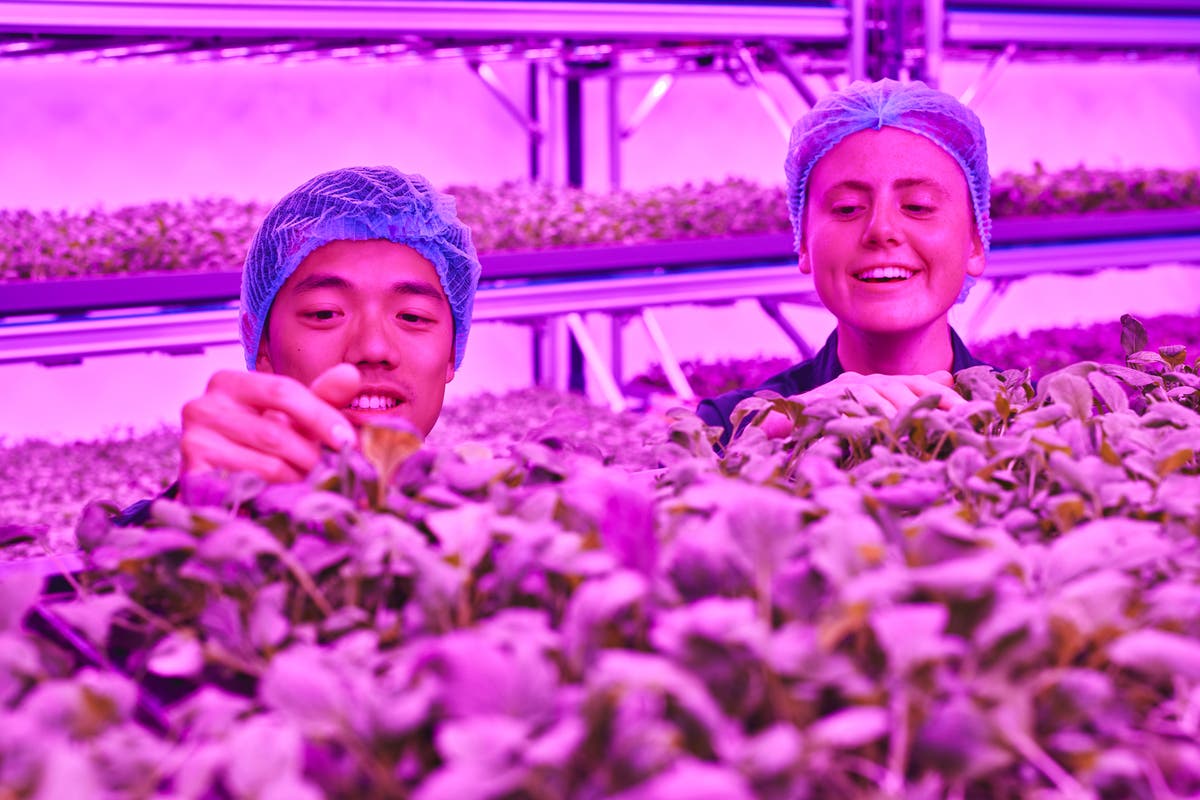 Two scientists, an agricultural economist and a farmer have set themselves the goal of eliminating the import of soft fruit, herbs and salads to the UK within a decade with a groundbreaking ‘skyscraper farm’.

But it is now testing how to also grow soft fruit, cut flowers and vines vertically on a large scale at a trials center in Bristol, and hopes to eventually be able to grow produce at a new site in Gloucestershire which opens this autumn to grow large quantities.

The company’s aim is to reduce the carbon footprint of the food consumed in the UK, remove seasonal restrictions and improve the country’s food security while making a profit.

“It won’t be long before it becomes unacceptable to air-freight fresh herbs inland,” said Glyn Stephens, who used to be a dairy farmer in Mid Wales before becoming the company’s cultivation manager. “In my mind it becomes like smoking, it just becomes socially unacceptable.”

Mr Stephens, 56, said that over time he has become increasingly concerned about human impact on the planet, including climate change, and he is excited to be involved in what he believes is something do good.

“I’m very aware of the damage people like me have done to the country – not intentionally – just by what we’re doing,” he said, citing the example of over-fertilization of crops.

Although growers at Jones Food Company use fertilizer, they say they use minimal amounts compared to traditional farming because fertilizer in the water system that isn’t absorbed by the plants is recycled, treated, and then put back into the plants.

Because vertical farming is done indoors—rather than on land—there’s no risk of fertilizer running off and polluting waterways. The company says it uses no pesticides and that growing food vertically uses 95 percent less water and can be done with 100 percent green energy.

“The food is probably a lot safer and cleaner than what’s grown in the beautiful English countryside, which farmers – like I used to – spray every two or three weeks,” Stephens said.

A vertical farm sees layers of plants on trays stacked vertically, with pipes delivering water, feed and nutrients, the company said. Temperature and humidity are controlled and the light mimics the hours of sunlight. The inputs are checked to ensure that the product is consistent.

The company is experimenting with strawberries, hops, tomatoes and tree seedlings, and also has the ability to grow “fortified” foods by adding extra vitamins to the water supply, but has not yet committed to commercial implementation.

James Lloyd-Jones founded the company in 2017 after Brexit, before the coronavirus pandemic and the Russian invasion of Ukraine. He said the events have confirmed the fragility of the food supply chain, while at the same time climate change has ravaged crop yields.

“You can run vertical farms in a clean way using renewable energy,” he said. “You reduce the number of road kilometers as there is no air freight involved and you can get nutritious products into supermarket supply chains and to the consumer within 12 hours.