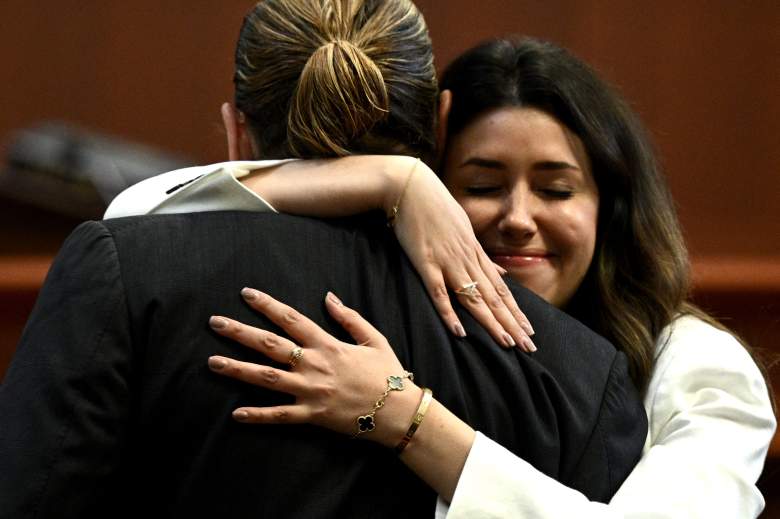 Camille Vasquez Abogada is Johnny Depp’s attorney and is representing him in his defamation case against his ex-wife Amber Heard. Weeks into the high-profile trial, rumors began flying that Depp is dating Vasquez. A viral video shows Vasquez being asked if the two are romantically involved. Read on to watch the viral video and see Vasquez’s response.

Vasquez and Depp embraced in the courtroom on Tuesday, May 17, 2022, prompting questions from a videographer and the internet.

“Hi Camille, people want to know, are you dating Johnny Depp?” the videographer asked in a video that went viral on May 18.

Vasquez laughed but didn’t answer the question directly, as the video shows.

A source close to Depp denied the rumors that Depp and Vasquez are dating in an interview with Fox News.

“It’s 100%, absolutely and unequivocally not true,” the source told Fox.

Fox News reported that Vasquez and Depp “repeatedly hugged” in the courtroom on May 17, fueling speculation that the two were dating. A Fox Digital videographer pressed Vasquez on whether she was dating Depp.

“It’s all over the internet. Can you set the record straight?” the videographer asked Vasquez when she didn’t answer the question. “Yes or no?”

Vasquez smiled and walked on, shaking his head. She turned her attention to a fan’s dog, waved at fans and hugged supporters.

Depp, 58, filed a lawsuit against his ex-wife Heard, 36, over a 2018 comment in which she claimed Depp was abusive. Depp’s legal team said the domestic violence allegation damaged his reputation and career. Heard filed a counterclaim against Depp, saying his claim the allegations were a “hoax” defamed her.

Vasquez is based in Orange County, California and is profiled as an Associate in the Brown Rudnick Litigation & Arbitration Practice Group. Before joining Brown Rudnick, she worked for a national company in Los Angeles, according to her profile. Her specialty is representing plaintiffs in defamation lawsuits such as the Depp case.

“Her current practice focuses on defamation claims on the plaintiff’s side, with additional experience litigating contract disputes, business-related torts and work-related claims,” ​​her profile reads. “Camille is adept at formulating offensive and defensive litigation strategies for private clients. She also has extensive experience dealing with parallel reputation management and crisis communication issues arising from these engagements.”

Vasquez’s profile at Brown Rudnick states that she received her bachelor’s degree from the University of Southern California in 2006 and her juris doctorate from Southwestern Law School in 2010. Vasquez is licensed to practice law in California, her profile states. According to her profile, she also speaks Spanish.

Vasquez was named one of Best Lawyers in Commercial Litigation’s 2021 list of “Ones to Watch,” a recognition she retains to this day, according to the publication.