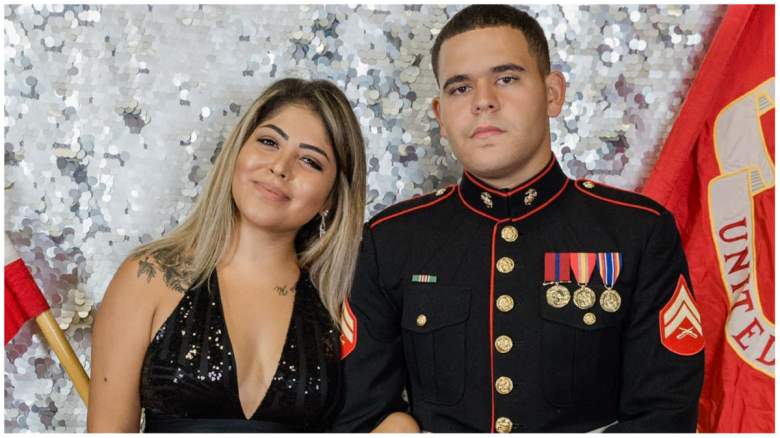 Bryant Tejeda-Castillo is a US Marine accused of murdering his pregnant, estranged wife, Dana Alotaibi, along a highway in Honolulu, Hawaii.

Tejeda-Castillo, 29, and Alotaibi, 27, were married, Lt. Deena Thoemmes of the Honolulu Police Department in a news conference. They’ve had marital problems recently, she said.

Alotaibi, an OnlyFans model, had posted a video on YouTube, where she also posted music videos, in which she made previous allegations of abuse and accused the military of not doing enough to protect her.

Tejeda-Castillo is charged with second-degree murder on $1 million bail, according to Hawaii News Now.

In a press conference, Lt. Deena Thoemmes that at 6:18 p.m. on July 20, 2022 in the H3 West area near an exit, witnesses observed a man standing over a woman and stabbing her multiple times.

He was in possession of a knife. Witnesses stopped and tried to restrain the man and help the victim, she said.

He fled into a bush area and was arrested by the police. He used the same knife and injured himself. He was taken to the hospital where he remains in custody, she said.

The 27-year-old victim was pronounced dead.

According to the Daily Beast, Tejeda-Castillo is “a Marine stationed in Kanehoe, Hawaii.”

“He was an active soldier,” said Thoemmes. “…I think they were here with the military.”

The Marines told Hawaii News Now, “We can confirm that the suspected Marine’s command has dealt with both him and the victim and has responded to the allegations and concerns brought to the attention of the command. Due to the ongoing nature of the criminal investigation, it would be inappropriate to comment further on this matter.”

In January 2022, Alotaibi recorded a video that was posted to YouTube with the caption “MILITARY SPOUSE – HAWAII HELP *READ DESCRIPTION.*”.

She cried when she called the National Suicide Prevention Hotline.

“It haunts me, like all the incidents, that he hit me and did terrible things to me,” she told the hotline. “Even when I asked for help it was like nothing had been done at all. And I’m like what can I do, why is he so untouchable?”

In the description, she claimed:

She had a popular YouTube channel. A sexually suggestive music video she recorded has had more than 1.2 million views. In this video she said she was Saudi.

She believes Alotaibi is still alive because “military officials have responded to repeated requests for help,” the news outlet reported. Cespedes told the news outlet her daughter had received a no-contact order from the military.

The two had an argument before he stabbed her several times and killed her, Thoemmes said.

She said police are aware of social media posts and will investigate documented and undocumented incidents of domestic violence, she said.

On TikTok, Alotaibi referred to herself as a “marine woman.” She had more than 76,000 followers.

On Instagram, where she posted sexually explicit photos, she described herself as an artist. She had 15,000 followers.

In June, a friend asked Alotaibi if she and her husband were still together. “Not after I got him njpd again,” she replied on Facebook.