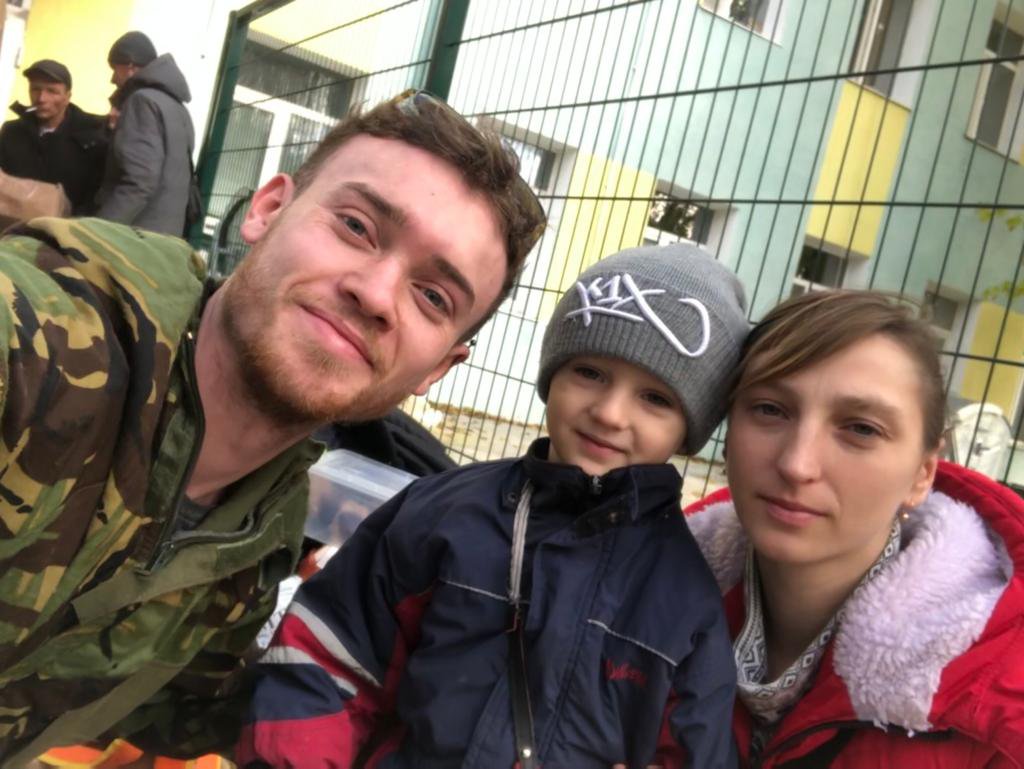 Chris Parry, 27, went to the war-torn country despite having no military experience, first helping with humanitarian aid before ending up on the front lines

Eight months ago, software developer Chris Parry had never been near a battlefield, but when he heard that Russia had invaded Ukraine, he felt compelled to help.

In early March, the 27-year-old packed his things and flew to Poland to join the Ukrainian military. He told his parents that he would not be on the front lines and was helping organize relief supplies and supplies.

“I wanted to join the Foreign Legion and initially they said you didn’t need a military background,” Chris said I. “But when I got there, they said you were more of a hindrance.”

Instead, he got a large white van with room for 15 people, crossed the border into Ukraine and drove to a large humanitarian center in Lviv.

“I said, ‘I’m a guy with a van and I want to help in any way I can,'” he said. “The military officer in charge showed me a vehicle with bullet holes and said, ‘You’re going to die.’ I didn’t sleep that night and wondered what I was getting myself into.”

But he resisted the urge to return to Cheltenham, Gloucestershire, and along with another volunteer from the US, Chris set out in his van in -15C snowstorms for his two-day trip to Kharkiv.

The vehicle broke down – one of many times – late that night after curfew. “When a car pulls up, you freeze, not knowing if it’s the Russians,” he said.

Chris’ first job was to take supplies to Kharkiv, Ukraine’s second-largest city, where Russian forces began launching indiscriminate attacks on civilians in February using rockets containing banned cluster munitions to cause widespread damage. Many were left without electricity, food and drinking water. He slept on the floor, a situation he quickly got used to.

Many civilians had fled by train, but others were trapped in buildings under heavy, constant, daily shelling. One morning, Chris and his translator received a distressed message from a woman that her father, 55, and mother, in her 80s, needed to be evacuated.

When they drove to rescue missions, they followed their GPS only to be directed to craters where a road should be. It’s almost like a computer game, he said.

They sped past a sea of ​​charred buildings, smoke and dust billowing into the sky, and in a gray, boring, USSR-style high-rise, they found the old lady and her son.

“She was in a state of dread and was shocked and scared of us,” Chris said. “She was immobile and we had to carry her out on a chair. She was like an infant again.” They also took in a woman who was “black and blue” all over. “She looked like she’d been beaten up,” he said.

Last month, Chris rescued a 32-year-old mother and her four children, aged five to 12, who had been hiding in a basement in an occupied town in the Donbass region since March.

“Your father was kidnapped by the Russians,” he said. “The basement was tiny and stuffy and they hid there for eight months. The children were like vulnerable little chicks, standing behind their mother and unsure whether the strange men spoke a foreign language. They worried we were Russians.

“We put them in our van and had to wait for a convoy for several hours. Now they could hear the loud bang of the shelling outside and they were scared and crying. I tried to distract her with candy and a dinosaur computer game on my laptop. The mother said that waiting was the scariest part of the war.

“Eventually we took them to a hospital where they were safe and warm and the kids hugged me tightly.”

But not all rescues have happy endings. Chris had instructions to help a family but they had problems with their vehicle and it took two days to get to them.

“When we got there the house had just been hit, there was smoke everywhere. A woman just stood there, emotionless. We kept saying in Ukrainian: “Come on, evacuation”. But she would not come; she just stared straight ahead.

“She took me to her garden and showed me her daughter’s burned, dismembered body. She was around mid 20’s. We got there late and that’s what comes to mind. She said: “What’s that about?”. She was like a ghost. She had lost her child.”

The horror stories of Putin’s brutal war never end. Three weeks ago, Chris evacuated three women, a woman in her 20s, her mother in her 50s and her grandmother, aged 75, from the village of Zarichne in Luhansk Oblast.

“Her house had been destroyed. They talked and my translator burst into tears. Later he told me they told him that the Russian soldiers forced themselves on all of them. Three generations,” he said.

“They were not afraid of us and seemed relieved. They had already been through hell and maybe they had nothing more to fear. They struck me as very mentally strong women.”

The more people Chris saves, the more determined he becomes despite the dangers. On a recent mission to a village east of Lyman, he was fired upon by Russian forces.

“We were shelled by artillery. They were watching us with a drone. I’m scared of being hit by a bomb from a drone. With artillery you first hear a whistle, but with a drone you only hear a buzz and then a bang.”