Belle and Sebastian’s Stuart Murdoch: ‘Nothing compares to a band’ 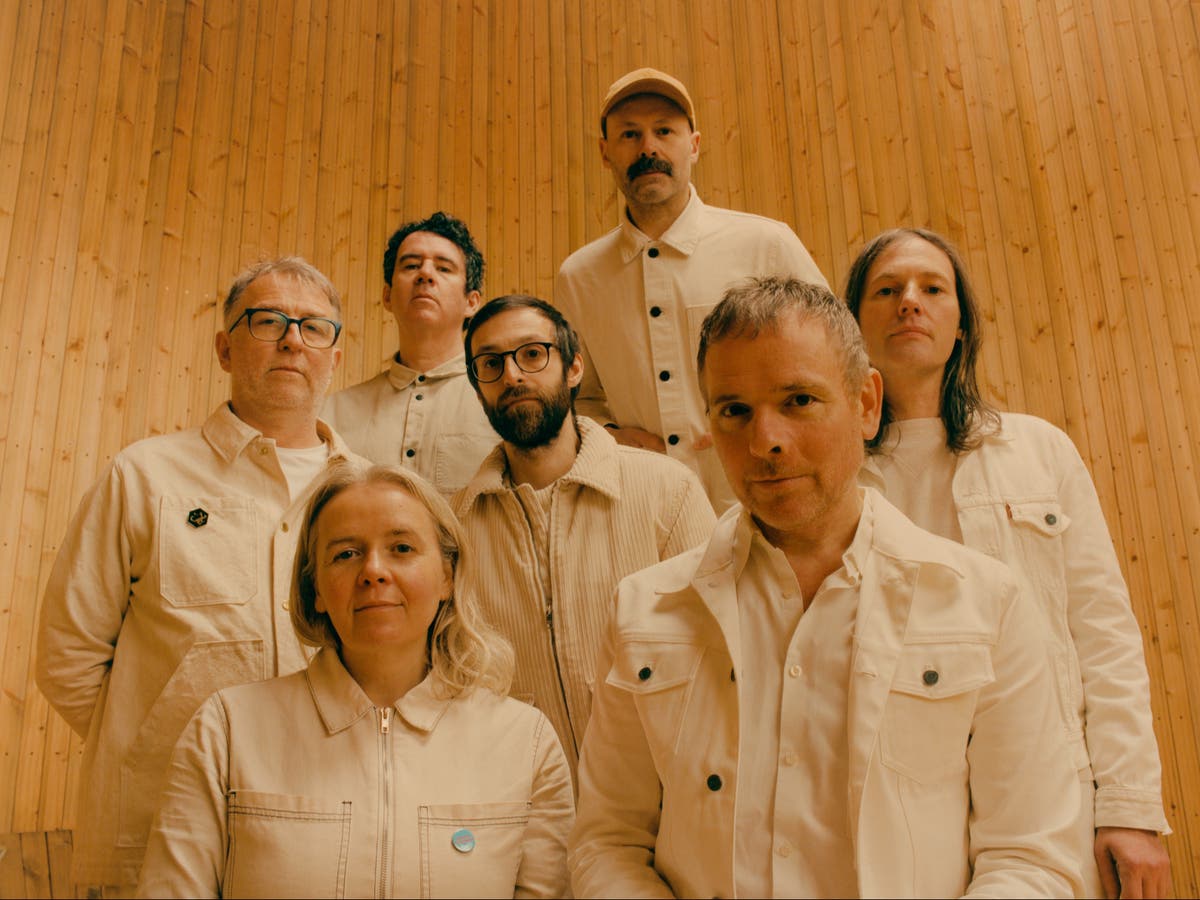 The musician waves happily through the restaurant window and casually leans his unlocked sidewalk tamper against the railing. Apparently in these areas there is no fear of theft. Because his band Belle and Sebastian have been part of the Glasgow furniture for 25 years and are real local heroes that nobody would dare to join? Because he’s in a hurry, a midday interview between pre-tour rehearsals and the release of a new album that hits stores any day? Because, well, he’s that type of guy?

The singer-songwriter, 53, settles down with boyish enthusiasm and conversationalism, and it’s not necessarily because we’re a little early: I’ve interviewed Murdoch on and off for most of those 25 years. He is visibly excited A little earlierthe band’s 11th studio album, not least because it’s already appealing to a new generation of fans, the children of OG fans.

“Right now we have two 15-year-old sisters in south-east London filming a video for us,” he says proudly of the clip for the band’s next single, the synthesizer-driven “Talk to Me Talk to Me.” “You know, this is modern music – we didn’t have the time or money to make any more videos. So I said on Facebook, ‘Okay, who wants to do the next video?’”

His request for a picture and a 100-word pitch required “about 100 treatments, and all these guys my age were like, ‘I’m in a forest. I look at myself in a mirror. There are trees and it’s dark…’ I think, for heaven’s sake!’ he says, annoyed by the stereotypes of his gender and generation. “And then this mom said, ‘My daughters are big fans…'”

The sisters sent a mood board, “a collage of many pictures. And you could immediately see how the mood of the video will be. So do it now. They got their whole school involved and we’re going to bring them all to the show in London [later this year]. I feel relieved, but I also feel very positive about it. It’s good to let the youth try… to see the second generation interested [us]. And the thing is, they’re going to come up with something that we never could have thought of that will probably resonate with younger people as well.”

Even better, her treatment doesn’t include filming the band.

“But of course I had someone from the union, Bectu, who got in touch with me and said [stern voice]: ‘Stuart, what’s the budget for this? Are you taking advantage of your fans just to get a cheap video?’ And I thought, ‘The budget was what I wanted to do it for, about £2,000!’ So I had a good time out there,” he adds with a relieved smile.

This home-grown “let’s do the show here (with a bunch of kids)” ethos fits in with Belle and Sebastian’s previous (adventure) ventures. In 1999 they started their own curated festival, Bowlie Weekender, at Pontin’s holiday camp in Camber Sands, East Sussex. Finally, in 2019, they launched a follow-up, Boaty Weekender, a cruise around the Mediterranean Sea with pals like Mogwai, Teenage Fanclub and Nilüfer Yanya all making appearances. I’ve been on board with both and both have been some of the best music (and partying) experiences of my life.

And it’s a making-of piece A little earlier. The pandemic dashed Belle and Sebastian’s original plans to record with Canadian producer Shawn Everett (War on Drugs, The Killers) in Los Angeles in spring 2020. “He’s a big cheese! He’s got Grammys from the Yin-Yang!’ Murdoch says it’s Glasgow’s word for ‘he’s got six’.

After six months of “shutting everything down” and everyone going off and doing their own thing (Murdoch wrote two-thirds of an autobiographical novel about his pre-B&S days), the band reunited in December 2020 at their long-running rehearsal space, around the corner from this one Restaurant, into a Covid-safe, socially distanced recording studio with pulpits for everyone.

“It’s like a doll’s house!” He beams, pleased with the sharpness. “We were scattered throughout the two-story building like Barbie dolls in a Barbie world,” Murdoch writes in the album’s sleeve notes.

Out of such cramped and cluttered environments has emerged a self-produced set of songs, sometimes written and recorded on the same day. It’s Belle and Sebastian’s most energetic, spirited and colorful album in a long time.

“Well, you could have less energy!” He laughs, his Scottish accent and West Coast babble melodic and expressive. “You met me then and you know how sick I was. I was not feeling well! That was the nucleus of the group,” he admits of how his health shaped the band’s early sound and profile. Murdoch has myalgic encephalomyelitis, or chronic fatigue syndrome, which he addressed in the defiantly glorious 2015 song Nobody’s Empire. “But over time we’ve definitely gotten more robust.”

A quarter of a century ago, around the time of the still stunning 1996 Opening Gambit tiger milk and when you feel scary the Scot was a reserved interviewee. A faltering conversationalist, at best if he could be awakened, saving his poetry and commitment to his songs.

But what songs. These first two Cornerstone albums followed The Boy with the Arabian Belt (1998), with its canonical title track and accompanying crowd-sourced fan campaign, saw the massive Glasgow indie troupe scoop the 1999 Brit Award for Best Newcomer under Steps’ nose, much to Pete Waterman’s chagrin. Then came the 2000s Fold your hands, child, you walk like a pawn which got her into the top 10 for the first time and carried on via pop-mod banger “Legal Man.” top of the pops. Belle and Sebastian were cardigan-wearing disruptors, a popular but antagonistic cult that stormed the smash hits Bastille.

“Ironically, although this is the band’s first five years, it’s probably the time we’ll always be known for,” admits Murdoch. This early recognition helped establish a widespread presence for a long-established British band with that rare thing: a devoted fan base in several planetarily diverse territories around the world, particularly America, that remains strong well into their third decade. “And it’s so difficult to shake people’s imagination of it. But we have been doing this for 20 years.”

What does he think of the band – which currently consists of Murdoch, Sarah Martin (violin, flute, vocals), Stevie Jackson (guitar, vocals), Chris Geddes (keyboards), Bobby Kildea (guitar), Richard Colburn (drums) and Dave McGowan (bass) – characterized or even held like butterflies by records you made over two decades ago?

“I think it’s okay. Usually you just put your head down and move on,” he replies with the composure of a prolific writer and a peaceful middle-aged man who practices Buddhist meditation and spearheads fans and fellow travelers in regular Facebook sessions throughout the pandemic.” But a few days ago I was on a podcast, and this American journalist was pretty sure. He said, ‘What can you expect when you created Belle and Sebastian Land! In America, no one knew how you look and all these records fell out, you created this thing.’

“But then suddenly Isobel left and someone else [had] left,” he says of former singer Isobel Campbell (his Sebastian’s Belle) and bassist Stuart David (the band’s co-founder), who moved on in 2002 and 2000, respectively. “But you were on the road, everyone could see you, and you were on the charts, and you did a record with Trevor Horn,” he adds of 2003’s poptastic Left Turn Dear Disaster Waitressmade with the visionary producer of precision engineered 80’s records from Frankie Goes to Hollywood, Yes and his own band The Buggles.

“So I have no complaints about how we’re perceived or not. You can’t expect to have everything. You can’t be the magical, fragile, mysterious thing, then suddenly you’re touring the whole world. I wouldn’t change a thing because being in active B&S is the thrill of my life. Touring and visiting all these places, I wouldn’t change that.”

A little earlier is the first full album the band has since recorded in their hometown fold your hands… in 1999. In the early months of 2021, in the bad ole days of lockdown #3 (like the third godfatherby far the worst), Murdoch made a deal with his wife Marisa, who is staying at home with their sons Denny, nine this month, and Nico, five, that he would work “only” a stipulated 10 hour day.

Then he put aside the songs he had been preparing with her sessions with Everett in mind “because they were written when the energy went to LA” and started over.

“I’m always interested in the new songs that come out of the grid. It was actually a unique chance in an album process to take something that was just made and just do it. Songs like “Young and Stupid”, “Prophets on Hold” and “If They’re Shooting at You” were recorded almost the same day they were written. The paint is still wet.”

That contributes in part to an album that feels like it was written by a band on the balls of their feet, with Jackson and Martin also contributing songs with an exciting, restless energy. Blocked, but paradoxically reinforced.

Aware of the virus and limiting the hours the entire band got together, some days they used drum machines instead of Colburn being able to be present, or Murdoch grabbed the sticks. Geddes built a mixing room upstairs, which he also used to break up keyboard benches, but was never able to see his bandmates and communicated exclusively via TalkBack. Murdoch had his own womb-like singing booth; when I later visit it looks like a music student’s cheerfully dilapidated living room, with piano, couch and color photographs on the wall of LA and San Francisco, so at least Murdoch had some sort of window on the world.

But mostly it’s Glasgow that the frontman says helped the band make the album. After choosing our de rigueur at the restaurant and sharing small plates (“when this place opened three or four years ago I was like, ‘Oh, that’s London…’”) I ask him, why?