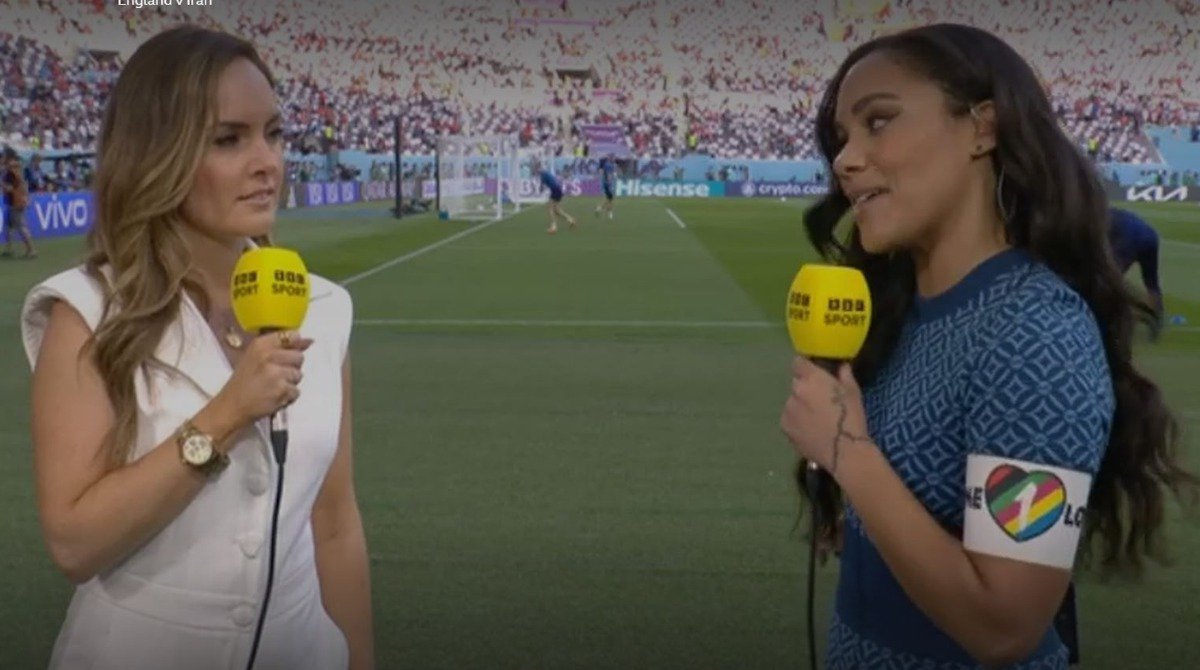 BBC pundit Alex Scott wore the OneLove bracelet during her broadcasting duties at the World Cup in Qatar.

The former England and Arsenal defender wore the anti-discrimination ribbon while reporting from the pitch ahead of England’s opening game against Iran.

It comes after The Three Lions and Wales announced captains Harry Kane and Gareth Bale would no longer wear the armbands.

They said Fifa had been clear they would impose “sporting sanctions” if captains carried the item on the pitch, adding they would not risk yellow cards or more.

Speaking earlier to BBC presenter Gary Lineker, Scott referenced comments made by Fifa President Gianni Infantino, adding that LGBTQ+ fans could not travel to the tournament.

“A whole bunch of fans from around the world from the LGBTQ+ community [are] I don’t want to travel here,” she said.

“Once again we refer to Gianni Infantino for what he said, you are not gay, you will never understand traveling to a country where you fear for your life just because you prefer who you love.

“To keep saying football is for everyone, we’re sitting here and it’s not because people haven’t been able to travel to see their teams, to support their teams out of fear.”

The Fifa president claimed at a press conference that he understood the discrimination against certain groups, including LGBTQ+ people, because he was bullied as a child because of his “red hair”.

He has also accused European countries of hypocrisy over their criticism of Qatar’s human rights record.

Nine European nations had agreed to wear the armband at the World Cup as a symbol of diversity and inclusion.

However, in a joint statement on Monday morning, the football associations of England, Wales, Belgium, Denmark, Germany, the Netherlands and Switzerland said: “FIFA has made it very clear that if our captains wear the armbands they will impose sporting sanctions on the pitch.

“As national federations we cannot put our players in a situation where they face sporting sanctions including warnings, so we have asked the captains not to try to wear the armbands.”

The decision drew criticism, with former England captain Rio Ferdinand telling the BBC: “They had a bump in the road and they all collapsed like a deck of cards.”

“I think the associations have to be stronger, the organizations have to come together as a unified approach and say we stand here,” he said.