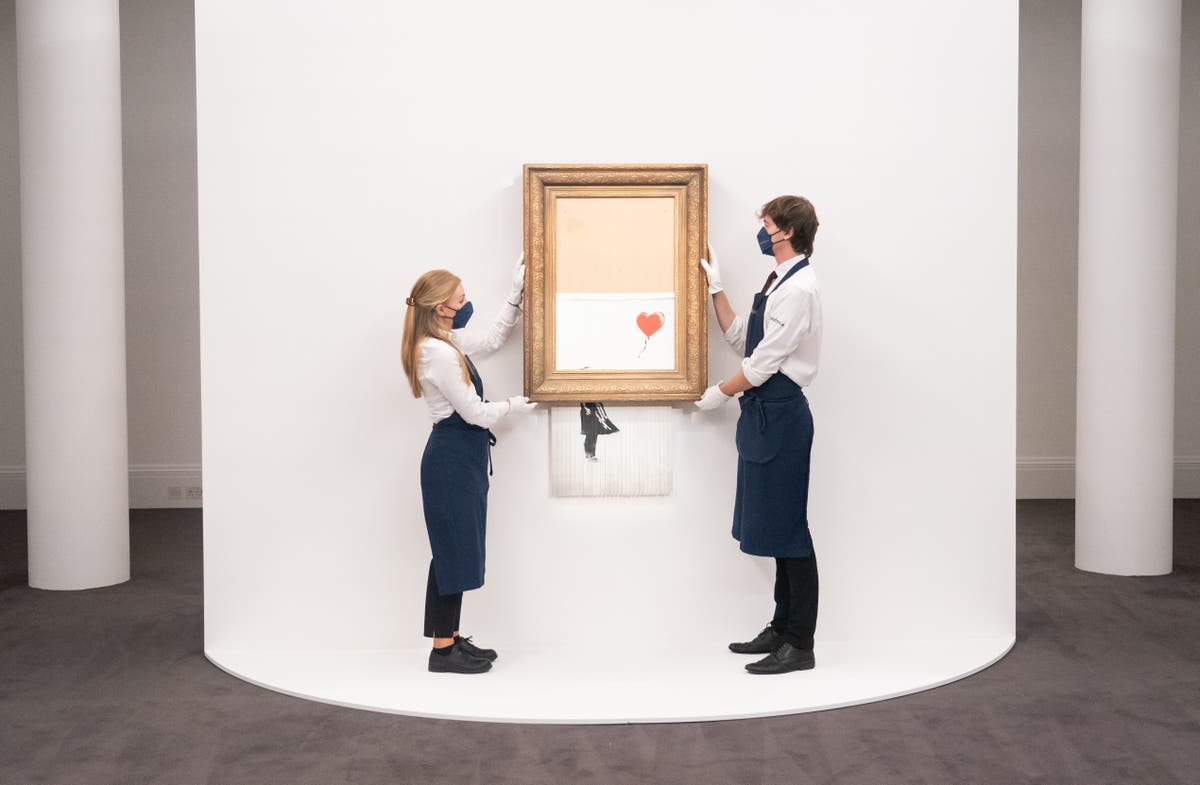 A Banksy painting was bought for £ 18.5 million three years after it self-shredded at auction.

The work of the elusive street artist Love is in the bin was sold by Sotheby’s on Thursday for £ 16 million. Including a buyer’s premium, the buyer paid a total of £ 18.5 million.

The price far exceeded expectations that bids between £ 4 million and £ 6 million would arrive.

The auction house said the price was a record for Banksy – who is known for stenciling pictures on walls around the world that often make sociopolitical points.

His painting, originally titled Girl with balloon, was sold for £ 1.1million at the same auction house in 2018.

The canvas image shows a young child reaching for a heart-shaped red balloon, a picture originally painted on a wall in East London in 2002. It has become one of Banksy’s most recognizable images and has been reproduced millions of times.

Once the sale was complete, the canvas slid out of the lower part of the frame and shredded itself to the sound of a siren. The paper shredder stopped about halfway through the canvas, but Banksy has reportedly said that he intended to shred it completely.

Sotheby’s said they had no prior knowledge of the shredder’s existence but said it was “the first work of art in history to be created live during an auction”.

Immediately after the sale, Banksy’s agents deactivated the shredder, but left the mechanics in place. They then renamed the work to Girl with balloon to Love is in the bin.

Banksy reportedly said he had prepared the self-destruct mechanism in case the work was ever auctioned off.

Alex Branczik, Chairman of Modern and Contemporary Art at Sotheby’s Asia, said: “It has been almost three years since one of the most brilliant moments in performance art of this century made auction history.

“It was a whirlwind to follow the journey of this now legendary piece and to have it back in our midst and to offer it tonight in exactly the space that the artist created.

“Banksy is no stranger to making headlines, and this latest chapter in his story has captured the imagination around the world – we can only guess what might be next.”

Mr. Branczik also said that the automatic destruction stunt “didn’t destroy a work of art so much by shredding, but instead created one”.

Auto-destructive art is an art form that originated in England in the late 1950s and was used by its pioneer – the artist and Jewish refugee Gustav Metzger – to express the horrors of events before and during World War II.

In March, Banksy raised more than £ 16 million for health projects through auctions Game changer, a hand-painted picture of a boy playing with superhero dolls.

While Batman and Spiderman are in a trash, the boy is holding a masked nurse in a cloak.

Banksy donated the painting to Southampton University Hospital in May 2020, during the first wave of the pandemic.

It was auctioned 10 months later, and the proceeds were donated to the hospital and other health groups across the country.