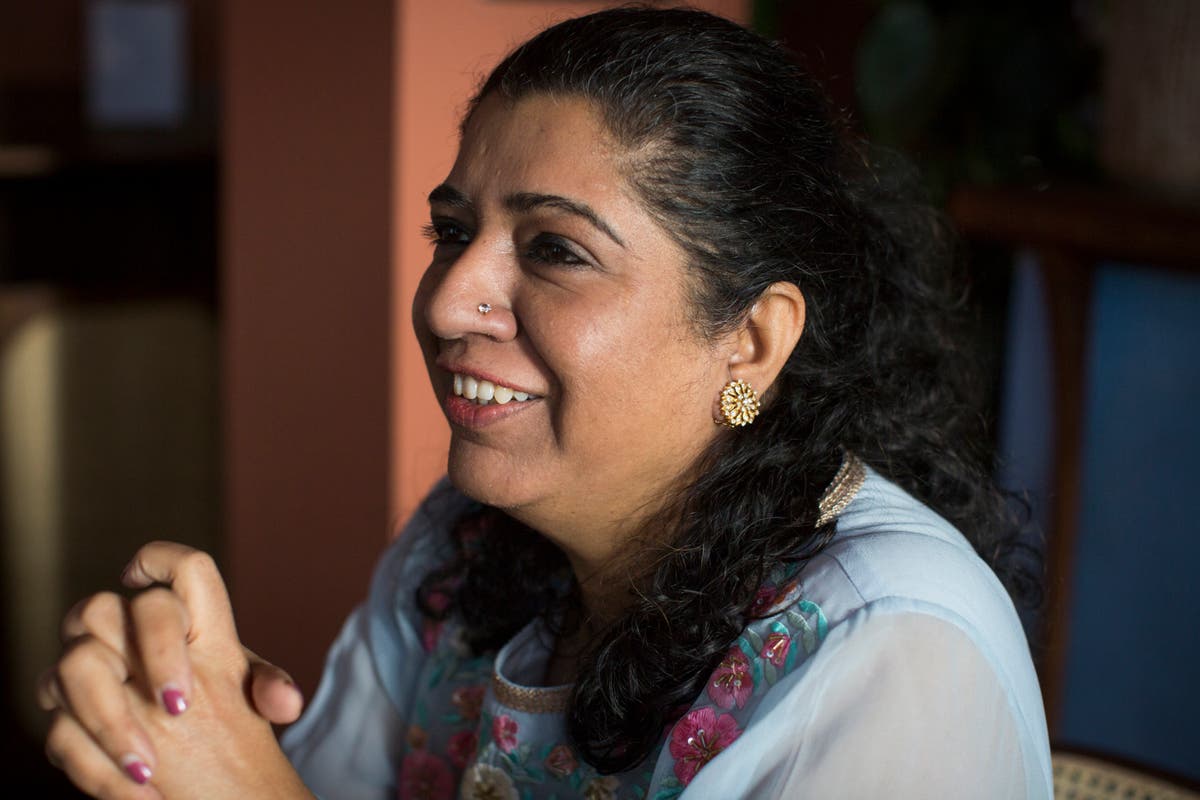 Asma Khan almost missed her speech at the Santa Fe Literary Festival. The award-winning chef and cookbook author set up a café in a Yazidi refugee camp in Iraq in 2019, which trains girls sold into slavery by Isis. It was a bold attempt, unusual for a chef who recently starred in the Netflix series Chef’s table and set up her own restaurant in central London. “I asked about chef volunteers, and the only girl who raised her hand was a girl who stammered a lot,” Khan says during a tea and talk event in New Mexico. “She was 19 years old and I later discovered that she could talk, but because she was the only virgin in her village she was passed around [Isis members] — and she lost her ability to speak.” She never got out of her head the teenage girl that Khan unceremoniously tutored and found purpose through working at the café.

How does such dignified work lead to an immigration nightmare? Khan was surprised when she was initially told she would not be granted entry into the United States as she prepared to leave for the Santa Fe festival. Because she had traveled to Iraq, she was automatically rejected, with no room for nuance or discussion. “I thought after Trump the rules changed,” she said, “but no.” It was only through the hard work of a number of festival reps — and a willingness to jump on any flight she could — that she landed this week in New Mexico. While it was an ordeal, she says, it came as no surprise: “With a name like mine, immigration is always a challenge. Even with a British passport in England.”

A proud Muslim who was born in India before moving to the UK in 1991, Khan now runs the only woman-founded, all-female kitchen in the world. She’s open about what that actually means. As she scouted larger locations for her already hugely successful restaurant, she was asked, “Do you have a management consultant? Who is the man with the money?” And ultimately it was only the pandemic – and the subsequent failure of a string of male-owned businesses – that allowed her to move to a prestigious location in Covent Garden. Now she’s back in the housing market and “because the pandemic is over, I suddenly notice that people are more reserved again,” she says.

Still, Khan believes their outsider status has some clear advantages. “I don’t get invited to Downing Street iftar, I don’t get invited to events with the sophisticated and the elite, but I do shake every cage I can,” she says, “…in this boys’ club of hospitality where everyone knows everyone, I don’t owe anyone anything. I am free.”

She revels in that freedom and isn’t afraid to speak up about the difficult issues. “I’m very political,” she says without apology. “As an immigrant, I want everyone to know that you can’t take my clothes, you can’t eat my food, you can’t have my culture if you don’t take me too. Brits telling people who look like me to ‘go home’ – what have you been doing in my country for 200 years? And here [in the US]they want to keep the mexicans out but everyone wants to eat tacos!”

Khan dislikes the term “cultural appropriation” because she believes there is great power and connection in sharing cultural outcomes – but she has little respect for people who refuse to recognize colonialism or welcome immigrants, while still professing to enjoy a biryani or a cup of chai tea. “As a Muslim immigrant, that [cookbook] is my conversation with my first country,” she says. “That’s the bridge I’m building.” She hopes people can enjoy their food while having nuanced conversations about the historical context.

Khan deconstructs her own past with the same verbal scalpel she uses for political commentary. She is the first college-educated woman in her Indian royal family who were expected to be “married by 18 and grandmother by 32,” just like her grandmother. “But I didn’t look pretty,” she said. “I was the fat ugly one – I didn’t want to be married at 18 – so my family had to send me to college. I didn’t fit the image of the ‘good princess.’ speed dating.”)

Though people tried to tell her that cooking would get her nowhere, Khan never doubted the inevitability of her own success. “I was never afraid that I wouldn’t make it,” she says, describing how she regularly said affirmations in front of the mirror. Now keenly aware of her own privilege, she’s determined to send the elevator back down. “I want to be on the right side of history,” she says. “I will not remain silent because silence helps the oppressor.” She is comfortable being who she is – “I’m Muslim, I don’t drink alcohol, I wear my traditional outfits” – in a world where she often looks like an outsider. “I want you to hear me say that in my accented voice,” she says, while describing her business acumen and demonstrating that sometimes speaking at all is a form of rebellion in its own right.

Khan wrote her cookbook “as a salam to my grandmothers and great-grandmothers before me,” but mostly for her mother, she says. Her mother was a deeply traditional woman who “never told me she loved me, she never told me she thought I was special, but she fed me and watched me eat, and now I understand those Kind of love.” When she got into unjustified trouble at school or her brother lost a soccer game, her mother would go into the kitchen and make a biryani — “and that was her way of telling us it’s okay. Khan describes the moment when she gave her mother a copy of the cookbook, where something completely unexpected happened: “She took this book and bowed. Well, as Muslims, we are taught not to bow to anyone – the idea is that you bow to Allah only. But my mother bowed to me and said, ‘You brought glory to this family.’”

Khan is an undeniable hit these days: “You can’t ignore me today.” Her restaurant, Darjeeling Express, is on almost every Londoner’s must-go list, with tables that are almost impossible to come by, and Danny DeVito is a well-known fan. A photo of Dan Levy and Paul Rudd at the restaurant went viral last year. But Khan never sits on their laurels. When the Darjeeling Express is closed on Sundays, she offers budding chefs free use of the premises. And she emphasizes that success didn’t come overnight: “I’ve lost more times than you can imagine. But none of you saw me when I failed – the door closed behind me.”

These days, Khan feels she’s “there to remind you: Don’t make other people look different than you.” She leaves the Santa Fe room with one final thought: In what area of ​​your life If you are successful, “recognize your privilege, and then reach out to those who cannot yet be what you are.”

LatestPageNews, as the event’s international media partner, with coverage of each day of the festival from exclusive interviews with some of the headline writers. You can find more information about the festival on our Section of the Santa Fe Literary Festival or visit the Festival website.