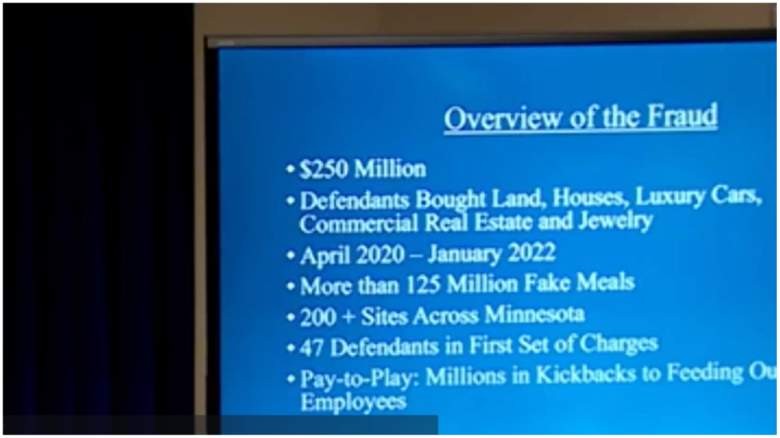 Aimee Bock is the Founder and CEO of Feeding Our Future, a Minnesota nonprofit that participated in the Federal Child Nutrition Program.

She is charged in a federal indictment with “overseeing a massive fraud program conducted by websites sponsored by Feeding Our Future,” the U.S. Department of Justice wrote in a press release dated September 20, 2022.

“Feeding Our Future has grown from approximately $3.4 million in federal funding and disbursements in 2019 to nearly $200 million in 2021,” according to the DOJ.

Bock was one of 47 defendants charged in the “$250 million fraud scheme that exploited a federally funded child nutrition program during the COVID-19 pandemic,” the DOJ says.

The United States Attorney General explained the scope of the scene.

“Working with agencies across the government, the Justice Department will continue to bring to justice those who have exploited the pandemic for personal gain and stolen from American taxpayers.”

“Today’s indictments describe a egregious conspiracy to steal public funds earmarked for the care of children in need in what amounts to the largest fraudulent pandemic relief scheme yet,” said FBI Director Christopher Wray.

“The defendants went to great lengths to exploit a program aimed at feeding underserved Minnesota children amid the COVID-19 pandemic and fraudulently stole millions of dollars earmarked for the program for their own personal use Advantage diverted. These allegations send the message that the FBI and our law enforcement partners remain vigilant and will vigorously pursue those attempting to engage in fraudulent enrichment.”

“This was an outrageous plan of astounding proportions,” said US Attorney Andrew M. Luger for the District of Minnesota.

“These defendants took advantage of a program aimed at providing nutritious food to children in need during the COVID-19 pandemic. Instead, they put their own greed first and stole more than a quarter billion dollars in federal funds to buy luxury cars, homes, jewelry and seaside resorts abroad. I commend the work of experienced investigators and prosecutors who unraveled the lies, deception and mountains of false documents to bring this complex case to light.”

Her LinkedIn page says Bock has worked as a teacher and for a variety of other nonprofit organizations.

Before that, she worked as operations manager for Partners in Nutrition in St. Paul, which is working to “break down barriers to participation in the USDA Child And Care Food Program. We work with day care centers, adult care centers, shelters and after-school programs to provide nutritious meals to people who would otherwise have limited access.”

She was the accreditation coordinator for the Minnesota Association for the Education of Young Children and was the director of the center and senior kindergarten teacher for Knowledge Universe. She was an MNCPD-approved trainer, board member of Early Childhood Family Education, and a substitute teacher.

According to the government, the defendants “designed and implemented a massive plan to defraud the Federal Child Nutrition Program.”

The defendants “received, embezzled and laundered millions of dollars in program funds intended to reimburse the cost of serving meals to children. The defendants took advantage of program changes to ensure underserved children were adequately nourished during the COVID-19 pandemic,” the government press release said.

“Instead of feeding children, the defendants enriched themselves by fraudulently embezzling millions of dollars in Federal Child Nutrition Program funds.”

What is the program? The press release says:

Some requirements were waived during the pandemic. “Among other things, the USDA permitted for-profit restaurants to participate in the program and to serve meals to children outside of educational programs,” the press release said.

Bock’s LinkedIn page says she has a master’s degree in educational leadership and administration from Argosy University in the Twin Cities and a bachelor’s degree from the University of Minnesota-Duluth.

According to Sahan Journal, Bock and a former business partner and friend named Kara Lomen had an argument when Bock accused the partner of hacking, which she denied.

Bock’s attorney told the publication he believes the “origin” of the federal investigation into Bock stemmed from Lomen. The lawyer told the Sahan Journal that Bocks denies any wrongdoing.

Feeding Our Future staff “recruited individuals and organizations to open Federal Child Nutrition Program locations throughout the state of Minnesota,” according to the press release.

“These websites, created and operated by the defendants and others, fraudulently claimed to be serving meals to thousands of children every day within days or weeks of their creation,” the press release said.

The defendants are also accused of “providing falsified attendance records purporting to list the names and ages of children receiving meals at the sites each day. These rosters were fabricated and created using false names.”