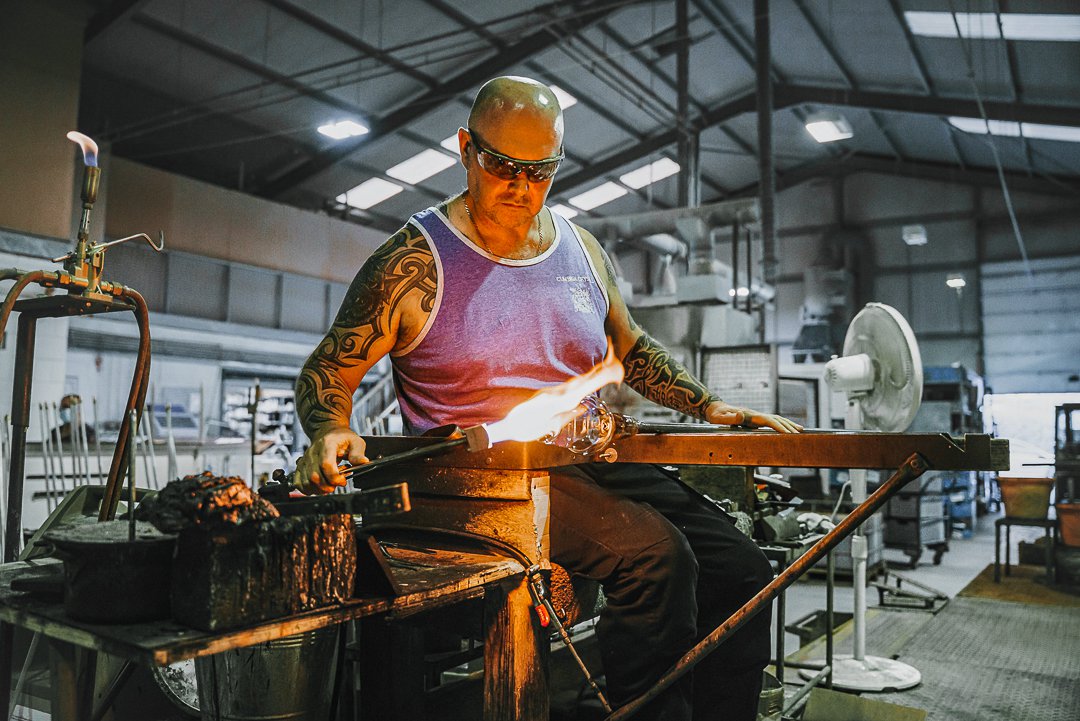 The boss of a traditional glassblower has warned that without urgent help his business would have collapsed on a £70,000 energy bill.

But an increase in the National Living Wage poses a much more immediate threat to the company, which employs 25 people. The additional costs could add £40,000 to the company’s annual payroll.

“We are essentially a very small company and extremely vulnerable to changes in energy and labor costs, particularly increases in the national minimum wage,” Mr Blade said I.

“Each of our five glassblowers must be trained for at least 15 years before they are suitable to work with us. Our newest glassmakers are from America because there is no more money in Britain to train apprentices.

“We are the last luxury crystal company in the UK using 2,000 year old processes to create our pieces.”

“Because glass blowing is such a niche trade, there are not enough experts here. We cannot really apply for funding for training or education grants.

“We sell pieces to trading customers, some retailers, and our crystal has appeared on the screen. We were founded in 1976 by Lord and Lady Cavendish who imported glassmakers from Stourbridge, the home of British glassmakers.”

“To reduce costs, we’ve already removed about 60 to 70 percent of the items we make from our production line, and I’m shifting the company’s emphasis from making glass to sell through luxury retailers.”

Mr Blade said: “Our energy bill is currently around £6,000 to £7,000 a year. We’re lucky at the moment because I had a longer-term energy supply deal with a major supplier before the crisis, so we’re temporarily protected from the worst of the hikes.

“But if you look at some of the world-famous glassmakers in Venice, many of them are closing because their bill has increased tenfold. If I hadn’t made other arrangements we would expect a bill of between £60,000 and £70,000. There was no way the company would have survived.”

He said nothing was announced in Thursday’s fall statement that would be sufficient to help the company.

“For the glass industry, the government is aiming for 30 to 40 percent of companies not to be dependent on natural gas. But there’s no technology right now that lets you make high-quality crystal glass with electricity,” he said. “We bought new ovens that run on gas seven years ago and if we had to convert to electricity it would have cost us £400,000 to £500,000.

“I don’t think we can expect help with our energy bills but I am very concerned about what the future holds. As for reducing our energy use, I don’t think most small businesses have the resources to think about a 2030 target. That seems a long way off when most of us are worried about what will happen in the next 6 to 12 months.”

“For a company of our size in our part of England, living wage increases are one of the most important issues for us,” he said. “We are making sure we reflect the increase across our staff as most of them work at thresholds not significantly above Living Wage.

“Almost 70 percent of all our costs are personnel costs because we need qualified personnel for what we do. For us it has a significant impact.

“As staff is our most important resource, although we expected this, we had to figure out how to help our customers manage it. At the beginning of the year, retail customers faced a 40 percent price increase just to help us survive the next few years.

“I would urge Mr Hunt to support small businesses as much as possible. We are struggling with the debt of recent years and many of us are on the brink of survival.”