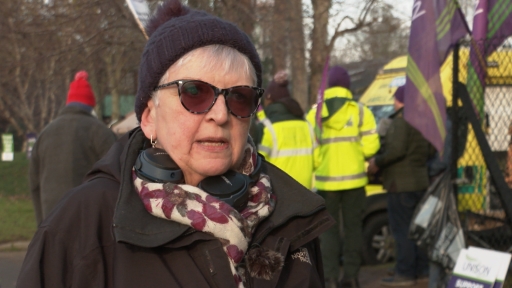 She said, “They deserve the amount they’re asking simply because in my situation I wouldn’t be standing here talking to you if they hadn’t been there.”

It comes as ambulance workers across the South West went on strike today for the third time in five weeks.

The South Western Ambulance Service warned people not to call 999 unless there was a genuine emergency, as a dispute over pay and staffing remained unresolved.

Employees were picketing across the country including in Somerset and Devon.

Kirsty Melluish, an ambulance dispatcher on the Exeter picket line, said today the healthcare system is “beyond ridiculous”.

She said: “I don’t feel like an ambulance because I can’t send ambulances out. We have calls waiting for hours.”

Ambulance dispatcher Jimmy Clancy said: “It’s incredibly frustrating when you show up for your shift and at the start of your shift they’re just saying all your resources are in place

I went straight to the hospital to take over the crews there all night.

“It’s frustrating when you go away for 12 or 24 hours and then come back to work to find the same patient still waiting in line for an ambulance.

While Tim Ebdon, a paramedic, said: “It doesn’t feel right to be on the picket line but it’s a broken system – what are we going to do?”

Paramedics at the Taunton picket line, including Chay Farzaneh and Michelle Varcoe, said their work is their calling and the strikes are important to them.

Chay said: “Two years ago the Government asked the public for help to protect the NHS and save lives and where are they now?

“We believe the government must act. They need to look at the situation and we need to protect our NHS.”

Michelle said: “We get a lot of support. People come by with cookies, sweets and chocolates.

“They stop speaking to us and publicly showing their support, they have our backs and they support us, and that’s really, really great for us to hear.”

Striking workers today didn’t mean there weren’t ambulances – with paramedics going to life-threatening emergencies, even if it meant crossing the picket lines.

Services such as the Minor Injury Unit at Bridgwater Community Hospital play a key role on strike days, with people being urged to seek such services unless they are seriously injured or ill and need to call 999.

NHS workers in England and Wales have received an average pay rise of 4.75% but are demanding one to keep up with inflation, which currently stands at around 10%.

That gap means the sight of striking public sector workers is likely to become much more common in the coming weeks.