Voices from the picket line: Nurses explain why they are on strike 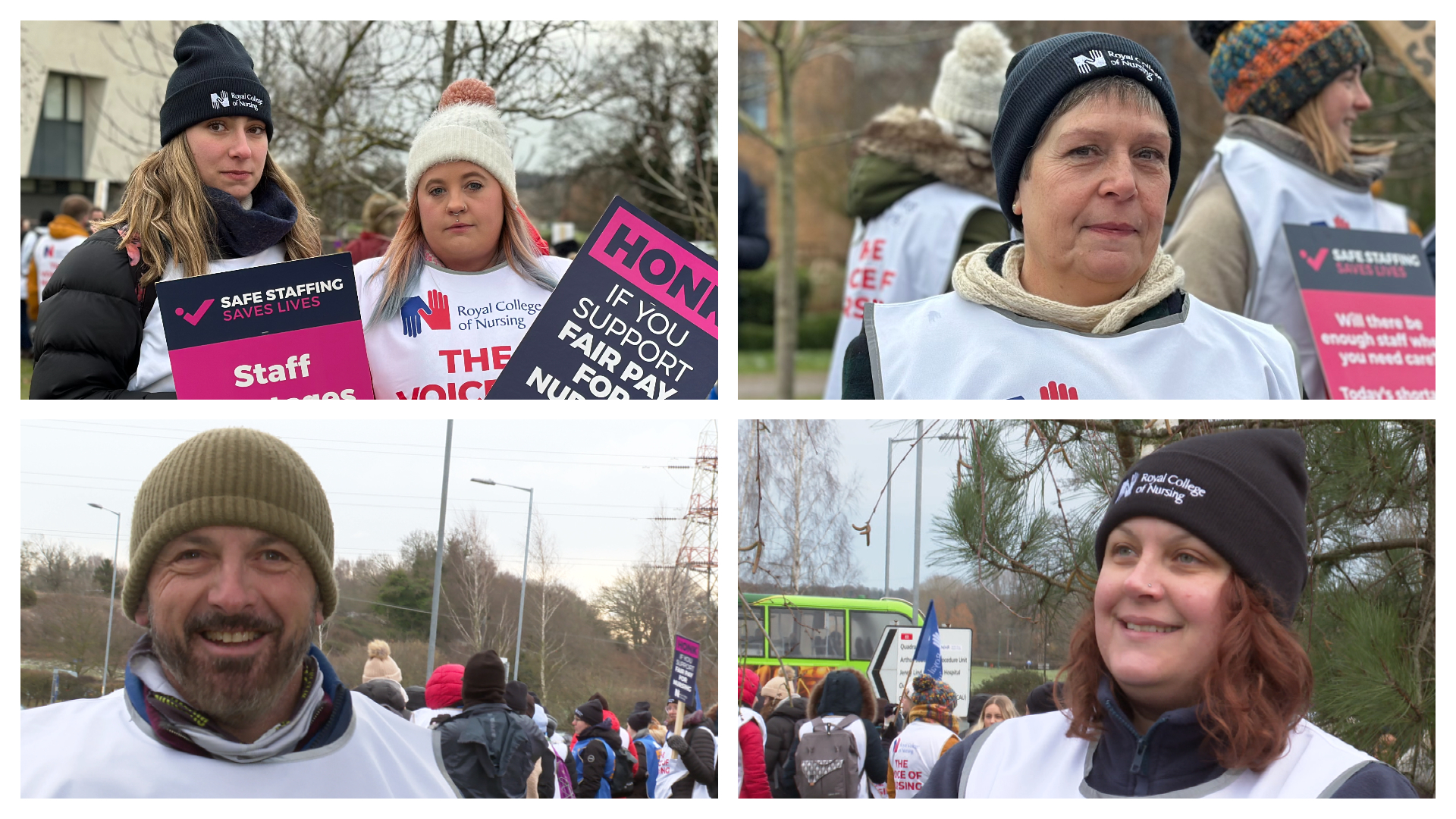 More than 55 health trusts have taken part in industrial action, calling on the government to increase wages and review working conditions.

Latest Page News Anglia spent time with five nurses on the picket line outside Norfolk and Norwich University Hospital to ask them why they had decided to go on strike.

Rachel Emberson has been a registered nurse for 43 years. In 1979 she stood on London Bridge to protest NHS reform and now she’s back on the picket line.

“When I started caring the Tory government closed hospitals and we said at the time ‘cuts cost lives’. And here we are again.

“The conditions we work under are constantly under pressure – we are constantly expected to do more than we have the energy and resources to do. We do our best, we work so hard and everyone brings that little something extra. We’ve always done that, but they always want more.

“I just want to say to the government, take care of us because we take care of the country. Look after the NHS, look after the nurses and respect our work, pay us well so people want to enter the profession and ensure our working conditions enable us to feel happy and safe .”

Lucy Phenix and Molly Armes are nurses who work in the ER – where they say they’re overworked to the point of exhaustion.

Molly Armes said: “It’s just gotten to a point where enough is enough. Many people have said they are concerned the strikes will mean hospitals are unsafe for patients and people who need help in emergencies, but the reality is, it’s not safe every day anyway.

“We’re working with more patients than we should, with a limited number of staff and people walking because they can’t handle it anymore.

“After the stress and strain of Covid, it has just reached breaking point.”

Lucy Phenix said a lack of facilities meant staff had to change in restrooms for their shifts.

“This means we have nowhere to safely store our belongings and nowhere to change – we change in a toilet stall.

“You adapt and you adapt, but because we are constantly adapting, you can’t get used to anything and it’s so stressful every day. You are constantly shaken.

“I’ve been in nursing for 10 years but I think if I just started nursing now I wouldn’t be able to cope. It is too much to ask especially for young nurses. It’s not sustainable to go on like that.”

James Harvey is a registered nurse with 30 years experience in three different countries. He said he saw staff struggle to fit equipment to patients in cardiac arrest.

“The staffing level has deteriorated so badly that I feel it is not safe now.

“We used to have six patients in a bay and now we have seven or eight on a regular basis and I feel that we are actually not operating within the code of practice that we should be. It’s just not safe anymore.

“Now if you have a cardiac arrest on the ward, doctors and nurses can’t get the equipment out quickly enough to treat them because there are just too many patients on the ward.

“I’ve seen that once or twice now. It’s a sad reflection of the NHS at the moment. We need to start paying staff for their experience and knowledge so that we can retain staff and only then give patients the care they need. ”

Ellen Nierop has been a healthcare assistant for almost a decade. She’s getting less than 11 pounds an hour.

“It was not an easy decision to go on strike: it goes against every instinct as a nurse and against what we believe in, but we have tried everything to try to bring about some kind of change in the hospital and in the NHS more broadly, because it is just falling apart at the moment.

“Staff are so overworked that they are leaving because of the stress and generally poor conditions they work in, and when they leave it means other nurses are catching up on the slack, which is also affecting their mental health, and then want to they leave it too.

“I think the majority of us aren’t even striking for more money for ourselves, but we’re thinking of anyone out there who wants to get into the profession – we want them to stay rather than go.

“I’m just angry now. Really angry. Because the government could put money into it. The government has money, it’s just that they choose where to put it and they don’t choose not to put it into the National Health Service. If they invested in the service it would make a huge difference and ensure people are treated right.

“I’ve thought about leaving but in my heart I need to be here. It’s a calling and I love my job but I would make more money working in a supermarket. Why are we being penalized for that?” a vocation? Why should it be this race to the bottom?”