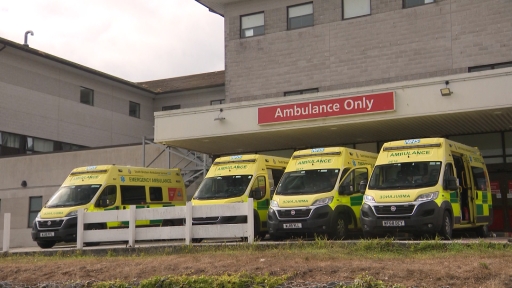 Tony Reedman, 54, died four days after suffering a stroke while on holiday in Cornwall in June last year.

The Cornwall Coroner’s Court heard that Mr Reedman, from Norfolk, waited two and a half hours for an ambulance to take him from his holiday home to the Royal Cornwall Hospital in Truro.

Mr Reedman was unwell on the evening of June 26 and his wife Jill dialed 999.

The callers suspected a stroke and ranked it a priority two – meaning an ambulance should have reached it within the national target of 18 minutes.

He underwent surgery at the hospital but developed a cerebrovascular infarction and died four days later on June 30.

Guy Davies, Deputy Coroner for Cornwall, said the delay in the ambulance reaching Mr Reedman directly delayed the start of treatment at hospital, which could have saved his life.

“I find that the delay between the 911 call and when Tony was taken to the hospital significantly reduced his chances of surviving the clot,” Davies said.

“The average stroke patient has a one in three chance of having a positive result after treatment with thrombolysis within the first hour after a stroke.

“This is reduced to one in 30 after four and a half hours. Tony’s stroke was more severe than average.

“I find from the evidence that it’s not possible to say definitively whether Tony would have survived if he had gotten to a hospital earlier and received treatment earlier.”

Mr Davies said bed blocking at the hospital due to deficiencies in the social care sector had meant ambulances were queuing outside hospitals in Cornwall and were unable to unload patients into the emergency room.

“I think the ambulance delay was due to feedback from the health system due to the lack of welfare in Cornwall,” he said.

“This lack of social benefits is adversely affecting Royal Cornwall Hospital and South West Ambulance as the hospital is no longer able to discharge patients who no longer require hospital treatment due to the unavailability of social care beds or social care packages.

“As a result, patients remain on wards when they should be discharged and this results in a shortage of available beds on hospital wards to which patients affected by an accident or emergency can be transferred.

“This in turn creates traffic jams during accidents and emergencies, which in turn means ambulances are unable to offload patients in the accident and emergency department and ambulances are being held there – sometimes longer than paramedic shifts, up to 18 hours, our Royal Cornwall witness said the hospital.

“These delays in ambulances are a concern that circumstances are occurring or may exist in the future that create a further risk of death.

“In my opinion, measures should be taken to prevent or reduce the recurrence of these circumstances and the risk of death they cause.”

Mr Davies said Cornwall’s chief coroner, Andrew Cox, had already written to the Health Secretary with his concerns about the problems and highlighted several other recent inquiries.

“All of these deaths have raised concerns about ambulance delays in Cornwall, which in some cases have significantly reduced patients’ chances of survival,” Mr Davies said.

“Tony’s death is among those referred to the Foreign Secretary for action to reduce the risk of future deaths.

“I feel the delay in treating Tony was a direct result of the ambulance delay.

“At the time of the triage, the Ambulance Service had sufficient resources to deal with the demand but there was no ambulance available to respond as available ambulances were held at Royal Cornwall Hospital due to an inability to offload patients in the Accident and Emergency Department.”

Mr Davies recorded a narrative conclusion and in addition to the chief medical examiner’s report he would also write to NHS England with his concerns about the lack of a dedicated thrombectomy service in Cornwall.

The inquiry found patients in Cornwall were attending the service at Derriford Hospital in Plymouth, but at the time of Mr Reedman’s death the service was only operating Monday to Friday from 9am to 5pm.

A doctor told the inquest: “It’s a postcode lottery and it’s better to be in Bristol on a Saturday night than Cornwall if you’re having a stroke because the services aren’t available here.”

The service has since been extended to weekends but does not operate 24 hours a day in Plymouth.