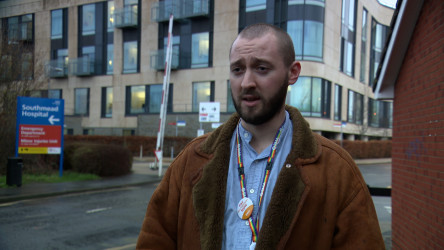 Sam Taylor-Smith says capacity Southmead Hospital in Bristol is strained to the breaking point and he and his colleagues are unable to give people the care they need.

Latest Page News West Country followed Sam’s working day after he agreed to shed a light on the daily struggles which he says are driving some of his colleagues either abroad or out of the job altogether.

“I know there will be a lot of patients waiting,” said the 27-year-old as he left home just after 7 a.m. “I know we’re setting up makeshift wards in corridors to serve patients. I know the list of patients to be screened will be huge.

“It’s gotten to a point where there’s no such thing as a quiet day. There is always something wrong or something going wrong.”

After four years as a qualified doctor-in-training, Sam says his team is constantly being asked to do more without having the resources to do so.

“What worries me is that I don’t think we are able to provide patients with the care they deserve, especially at this time of year and that is one thing that weighs heavily on everyone.”

Sam says 62-hour workweeks with nights and weekends are not uncommon.

He is a member of the British Medical Association, which is currently voting young doctors on strike action. If approved, it is scheduled to begin in March.

Members are demanding a 33% pay rise after allegedly years of under-inflation pay, resulting in a 26% real pay cut.

If you would like to share your experience of the NHS please email the health team at Latest Page News at itvnewshealth@itn.co.uk

Upon arriving at Southmead Hospital, Sam learns that three colleagues in his team of eight are absent.

“A friend of mine was just brought into the ER because 18 patients have been there for over 24 hours since the decision was made to admit them,” he explains. “It looks like we’re going to go back to firefighting like we always have.”

At the end of his shift, Sam says public gratitude alone won’t keep people in a job he believes is chronically underfunded.

“I love the job and that’s a big factor for me, but I’m worried.

“If I couldn’t work full-time, I would be really struggling, and I think that would probably mean I would have to look for work somewhere else or in another career or abroad.”

A spokesman for the North Bristol NHS Trust said: “Our staff are working incredibly hard in difficult circumstances to provide our patients with the best possible care.

“Like the wider NHS, we are very busy and are seeing a large number of very ill patients. In addition, many patients on our wards no longer require inpatient treatment, but can no longer release these beds due to a lack of suitable alternatives in the community or at home.

“We are sorry for all patients who have not had the best experiences during this time.

“Support is available to all of our employees and we encourage anyone who has a concern to raise it directly with us so we can address specific issues promptly.”