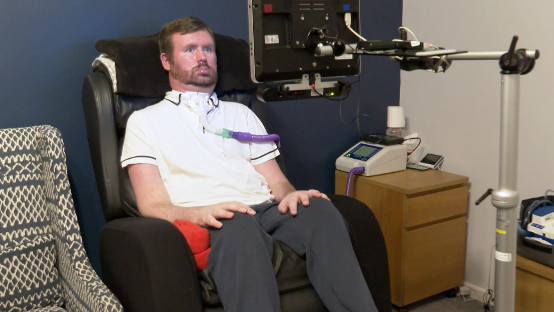 Mark Taylor was initially given three years to live when he was diagnosed in 2009 just months after winning the FA Cup vase.

He told Latest Page News Tyne Tees: “When I was diagnosed the doctors told me I would probably die within three years. Obviously, that was incredibly difficult to hear.

“I didn’t think I would see 30 let alone 40. I’m going to have a birthday party so it will be good to see everyone.”

Mr. Taylor uses a computer to communicate with others due to his limited mobility.

He described it as his “lifeline to independence” as he is able to control his home environment and communicate with friends.

Motor neuron disease is a condition that affects the brain and nerves, causing weakness that worsens over time.

It is currently incurable and treatments are available to lessen the impact on a person’s daily life.

Having a related condition called frontotemporal dementia can sometimes mean you’re more likely to develop MND, according to the NHS.

In most cases, the condition does not run in families.

Mr Taylor told Latest Page News Tyne Tees: “My diagnosis has left me severely disabled, I’m on a ventilator all the time and I can’t move my body at all apart from a little movement in my feet.”

The former footballer was part of Whitley Bay’s winning squad when they lifted the FA Vase Cup in 2009.

Now Mr Taylor is hoping to raise awareness of the condition.

His sister Gemma Ormston said: “We are incredibly proud of him as a family, we always have been.

“It’s not just about how he’s living his life with MND, but also the awareness he’s raised about it. Maybe it can give people newly diagnosed with MND a little hope and show that it’s possible to live your life with it.”