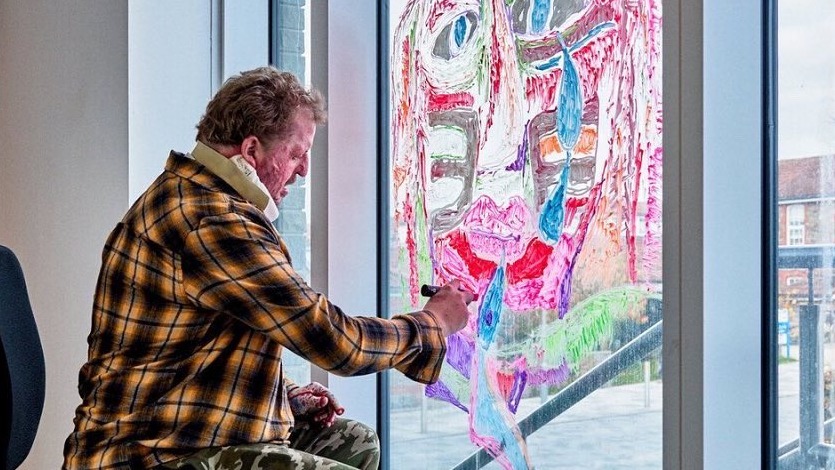 Jeff Johns, known as ‘Big Jeff’, suffered 50% burns in a cooking accident at his Totterdown home in June. He has said he was cremated “within an inch of his life”.

Jeff was initially treated in a specialist burns unit in Swansea before being transferred to Southmead in August.

Jeff typically attends concerts most nights, making him one of the most prolific concert-goers in the country, but while stationary he only attends soundchecks with friends.

On Saturday 19 November he was able to witness part of the Bristol Takeover at the Bristol Beacon.

He has also used his artistic talents to aid in the healing process and began playing the drums and drawing as part of his therapy.

Occupational therapist Helen Barnes said: “We have some paper so he does that to work on his range of motion and his standing, but we just play his drums or we do a number of things. “

The dedicated music fan is a popular artist who has had several exhibitions and when hospital staff saw his distinctive, colorful and uplifting style, he was commissioned to paint a window near the hospital entrance.

Jeff is hoping to raise money for Fresh artthe arts program for North Bristol NHS Trust, which aims to “use the power of creativity and the arts to make a positive difference for our patients, visitors and staff”.

On his fundraising pageBig Jeff said, “During this time I was encouraged and supported to regain my creativity. I painted my window in my room and installed an electric drum kit to help with my physio.

“I like walking around the ground floor of the hospital, looking at the art exhibitions and listening to the piano playing.

“I was recently commissioned to paint a window at the hospital entrance. I want to give back to the hospital by highlighting the great work Fresh Arts do!”

Jeff still has some procedures to go through before he can be released but hopes he will be home with support soon.