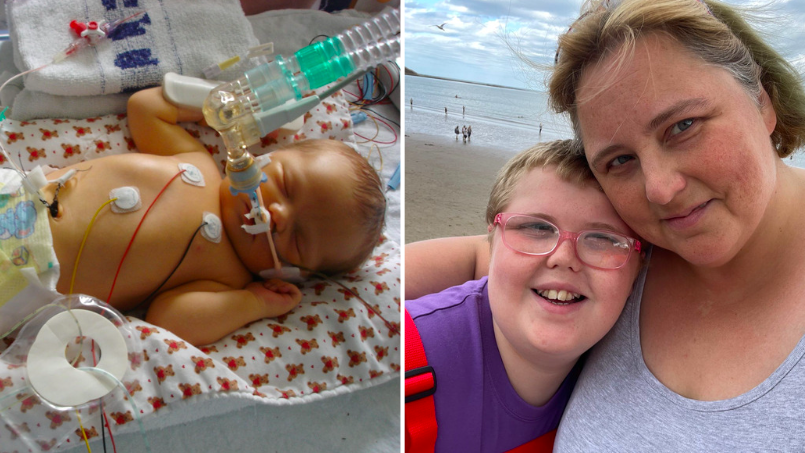 But in the hours after his birth, his health deteriorated.

He showed signs of early-onset group B streptococcal (GBS) infection; a bacterial infection that can lead to life-threatening conditions such as meningitis if not treated quickly.

what happened to adam

About 14 hours after Adam’s birth, he was transferred to a neonatal intensive care unit.

The following day he was diagnosed with GBS and meningitis. He then spent almost a month in intensive care.

Three hours before the transfer, Adam’s condition was listed as “normal” despite not having eaten properly since birth.

Adam is now 11 years old and has brain damage as well as hearing and vision impairments.

He was diagnosed with autism, severe learning disabilities and behavioral problems.

He will likely rely on others to take care of him for the rest of his life and will not be able to work.

After Adam’s mother, Charlotte Irwin, directed Mitchell to investigate the family’s care under the Shrewsbury and Telford Hospitals NHS Trust, the Trust has agreed to accept 80% responsibility for Adam’s brain injury. The Trust has also agreed on an interim payment.

The next phase of his case is to obtain evidence to determine the amount of compensation Adam needs to help fund the lifelong care and therapy he needs.

The liability agreement and an interim payment of indemnity were approved by the High Court today (23 January) and will be administered by Irwin Mitchell’s specialist Court of Protection team.

After the liability clearance, Charlotte, a Church of England priestess, has joined her legal team to call for lessons to be learned to improve maternity safety nationally.

Last year, an independent survey found that more than 200 babies could have survived if they had been cared for better.

Mothers have died or been injured due to neglect of care, and children have been left with life-changing conditions.

Charlotte said: “My pregnancy with Adam was textbook in many ways, but it felt like that all changed when my waters broke.

“From that point on I just had the maternal instinct that something was wrong, but I was reassured so many times by the midwives that everything was fine.

“At no point in my pregnancy or in the hours after Adam was born was I told about group B strep.

“Later on, after reviewing my records, I found that early in my pregnancy it was decided that I would not be tested for GBS because I did not have the risk factors involved.

“It was very difficult to learn that this was being considered but not discussed with me given the possible outcome.

“While Adam is adorable and I’m so grateful to have him in my life, it’s hard not to think how things could have been very different for him had he received the care he should have.

“Adam will never lead an independent life and will need lifelong care. While devoted to him, I am now raising a severely disabled son which is extremely challenging and has changed the path of both of our lives forever.

“Nothing will ever make up for what he went through, but today we can try to look to the future as a family knowing we have the answers we deserve and the peace of mind that Adam’s needs will be taken care of.

“My heart goes out to all other families affected by maternity issues, not just in Shrewsbury and Telford but elsewhere.”

She adds: “There are still too many stories about families picking up the pieces after caregiving mistakes, so it’s important that families continue to speak out.