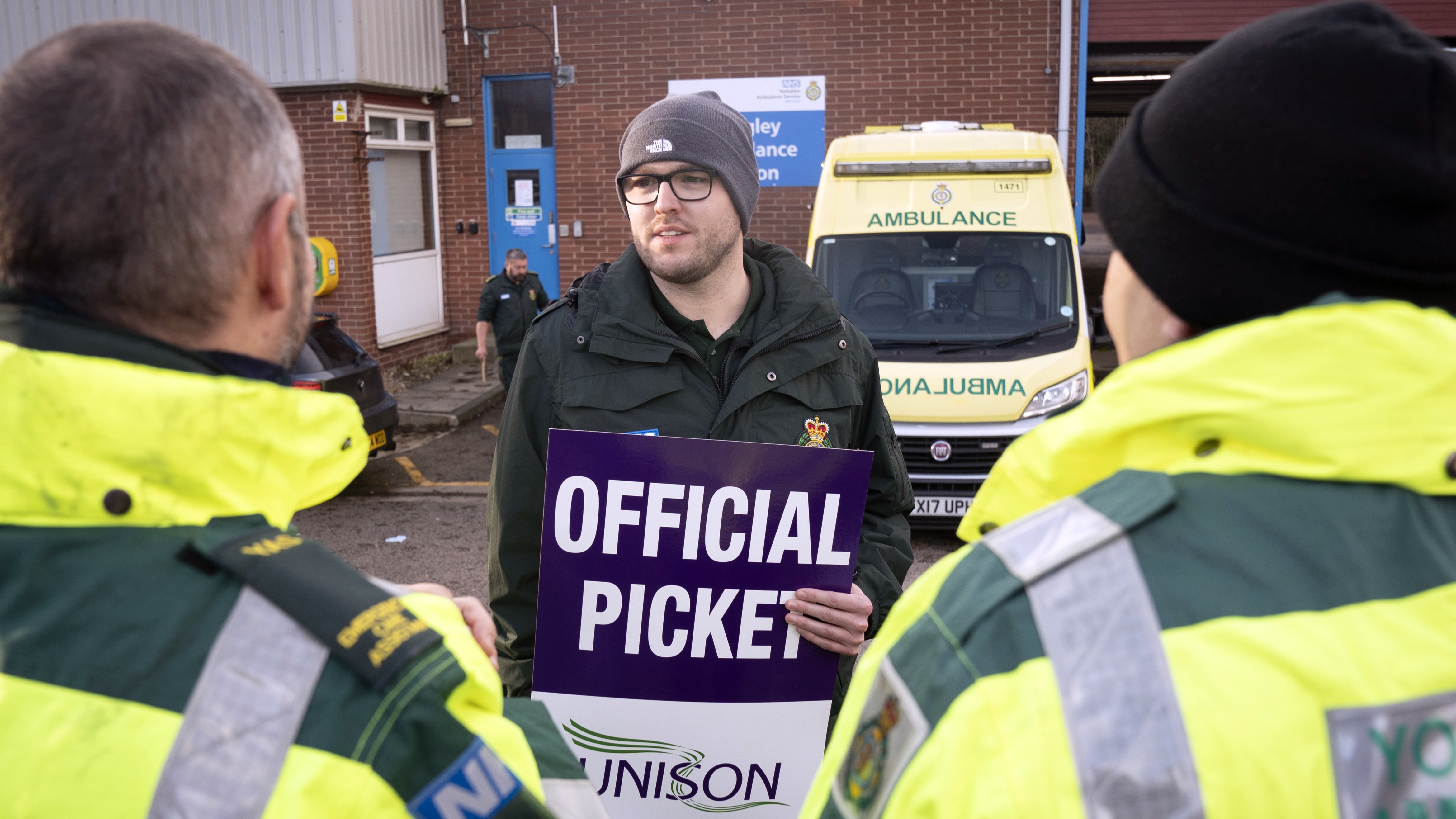 Staff went on strike for the third time in five weeks today, amid calls for the government to urgently resolve a deepening dispute over health workers’ pay and conditions.

It comes after Chancellor Jeremy Hunt was told he could stop industrial action and start solving the staff emergency if he could “fairly” find new money to pay health workers, including paramedics and NHS workers.

Thousands of Unison, Unite and GMB members will parade across England and Wales on Monday.

Up to 15,000 Unison ambulance workers will go on strike for the third time in five weeks and will be joined by 5,000 of their NHS colleagues at two Liverpool hospital trusts.

Unison General Secretary Christina McAnea said: “The solution to the growing NHS crisis is staring Government in the face. It’s very simple, the chancellor just has to raise the money to pay health workers fairly.

“The public wants the government to end the dispute, as do NHS staff, but most ministers look as though they would rather step in and do nothing than raise salaries and help turn the ailing NHS upside down .

“Higher wages would discourage experienced staff from going into better paying jobs and encourage more people to come and work on the NHS.

“More staffing would improve ambulance response times and reduce patient waiting times for treatment. Anyone would be a winner.

“It’s strange that it’s the chancellor who is blocking progress. Jeremy Hunt knows the NHS better than anyone in Cabinet.

“As Health Secretary he negotiated the collective agreement to end the 2015 NHS strike and as Chair of the Health Select Committee he pushed for fair pay. But as chancellor, he chose to forget all that.

“Jeremy Hunt knows that improved wages are crucial to solving the NHS staffing crisis. He must come out of hiding and unlock the funding to end the strikes. Then the focus can be on nursing the NHS back to health.”

Nearly 1,000 West Midlands ambulance workers in the GMB union will go on strike, including paramedics and paramedics.

GMB lead organizer Stuart Richards said: “The message from ambulance workers in the West Midlands is clear – the Government needs to talk about pay now.

“With the NHS crumbling at our feet despite the desperate efforts of ambulance workers, we have waited two weeks today for another meeting with ministers.

“Instead of working to solve the problems, this government has demonized the ambulance workers who insured life and limb on strike days.

“The only way to resolve this dispute is with a decent salary offer. We are waiting.”

More strikes by nurses and other NHS workers are planned in the coming weeks.

Health and Human Services Secretary Steve Barclay said: “It is very disappointing that some ambulance workers are continuing to take industrial action. While we have contingency plans in place to mitigate risks to patient safety, further disruption will inevitably occur.

“It’s important people continue to call in for treatment – call 999 in life-threatening emergencies and use NHS 111 online, local pharmacies and GP services for non-life-threatening care.

“I have had constructive discussions with unions about the 2023/24 wage process over the coming year and I am very keen to continue talking about what is affordable and fair.”