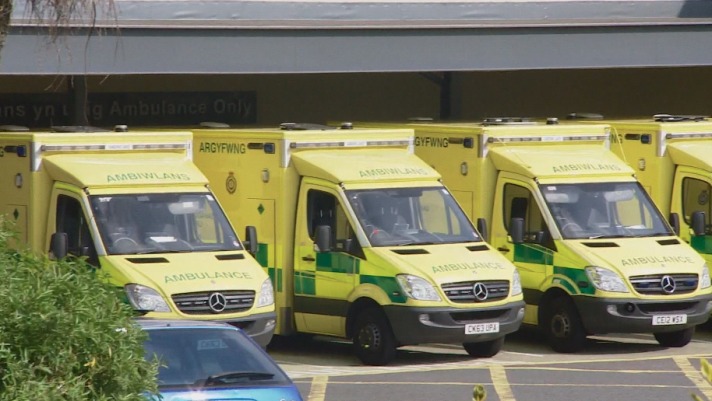 In October, just 48% of ambulances arrived within the eight-minute target time on red calls – meaning the patient is in imminent danger of death.

This is 2% less than in the previous month and at the same time last year.

There is a target of 65% of these calls being answered within the target time, but this has not been achieved for more than two years.

It comes after one Latest Page News Wales’ inquiry found ambulances are waiting up to a day to take their patients to hospitals.

A shortage of available beds in hospitals means ambulance crews often spend their entire 12-hour shifts outside of emergency rooms.

The numbers also show an increase in the number of patients waiting longer than four hours to be seen in the emergency room.

In October, 66.6% of patients were examined within this target time, compared to 67.9% in September.

The Welsh Ambulance Service said its average response time to red calls in October was 10 minutes.

Lee Brooks, Executive Director of Operations, said: “Emergency ambulances are designed to provide immediate life-saving care and get patients to the hospital promptly for treatment, so it’s just as frustrating for us as it is for the patients when we can’t deliver that part of our service.

“In October we lost nearly 29,000 hours to handover delays across Wales; that’s more than a third of our capacity for the entire month.

“Despite record recruitment, including the creation of 400 additional positions in our ambulance service over the past three years, it is not enough to plug this lost capacity.”

He added that the service is treating more patients by phone and in the community, making adjustments to its rostering system and working to deliver up to 100 additional frontline workers by the end of January.

In response to the latest figures, the Welsh Government has highlighted “unprecedented demand” on the NHS.

“More than 361,000 consultations were carried out in hospitals alone in September,” said a spokesman.

“While we recognize that ambulance performance is not what we expect, we are driving improvements including expanding same-day emergency care to seven days a week, better managing calls to reduce hospitalizations, and hiring more staff. Without all of this, the pressure on the system would be even greater.”

Welsh Conservatives have urged the Government to ‘stop breaking all the false records’.

Shadow Health Secretary Russell George MS said: “When we see almost a quarter of the population on an NHS waiting list, the slowest ambulance response times on record and the UK’s worst A&E wait time, then I think it’s more than fair to say that NHS Wales’ ability to treat patients is on the razor’s edge.

“I just don’t understand why Labor ministers are ignoring calls for surgical centers and winter war rooms to meet these dangerously long wait times when we are seeing them making very visible progress in England.”

Plaid Cymrus spokesman for health and care, described the NHS as “entered into a vicious circle”.

Rhun ap Iorwerth MS said: “While Covid has certainly exacerbated the problems, these problems existed long before the pandemic.

“Clearly action needs to be taken now to increase capacity and improve patient flow, but the Welsh Government of Labor needs to ensure things are sustainable over the long term.

“That needs to involve a dramatic shift in attitudes – and government funding – towards preventive health care. We need a prevention revolution to ease the pressure on our NHS.”