“You look like Marilyn Manson!” Fans are freaking out over Madonna’s BIZARRE new look in salacious new video 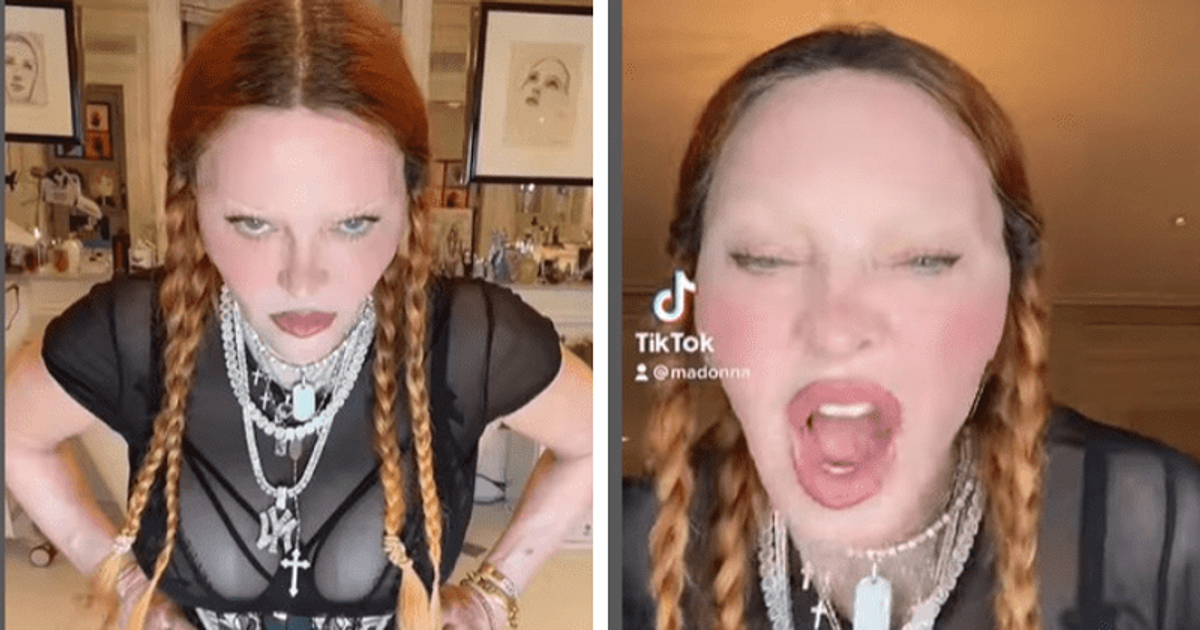 The ‘Queen of Pop’ posted a clip to social media of her trying to lip-sync to Baby Keem’s song ‘Vent’.

LOS ANGELES, CALIFORNIA: Fans of Madonna have expressed concern on social media after her icon posted a bizarre clip on TikTok and Instagram. When the 64-year-old singer spoke the lyrics to Baby Keem’s “Vent,” she raised a lot of eyebrows.

Many people went to the comments section to criticize the singer. Some even suggested that the Queen of Pop’s time is now coming to an end. “The Madonna I used to admire was the one in ‘The Immaculate Collection’…that woman lost her whole mind of late.

The ‘Material Girl’ singer wore a sheer black top worn beneath a lace corset with layers of shiny diamond chains, and also sported a braided wig. In the video, she can be seen angrily rapping the words to the song: “Have you ever been slapped in your f*cking face?” What do you say? oh, didn’t you? Okay, wait.” The 64-year-old pop icon also hopped on the recent trend of bleaching or even shaving her eyebrows. Her overall appearance was heavily criticized by fans.

“This is just awful! What happened to the real Madonna, the one you can actually look at and say wow you are beautiful and talented!!! LMAO 🤣,” read a comment below the scroll posted on Instagram. Another person found her recent videos “gloomy and worrying” and wrote, “You were my idol growing up. I used to love your music and creativity, 👏 please stop these weird movies! Now it’s getting dark and worrisome.”

Someone else quipped: “What happened to you? You look like Marilyn Manson or something! Don’t shave your eyebrows!” Meanwhile, another noted that this “isn’t Madonna” and asked if she “plays the main character in American Horror Story”? In a series of comments, fans begged her favorite to “stop these weird videos” and suggested she should consider “retiring gracefully.” Many expressed their fear of her looks, with one saying: “She looks scarier every day!” “What the heck happened to Madonna? She needs help these days. It’s awful to look at,” read another comment under the post. “Something went wrong with this lady… 😂,” noted another.

Despite the overwhelmingly negative comments from people who found the clip “disturbing,” there were still some who chose to defend their icon. “For those of you who are saying, ‘Where’s the Madonna we used to know?’ You’re obviously not a fan of Madonna at all! If you were you wouldn’t belittle her, Madonna always struck a chord. She always had dark moments, she was always creative. Her creativity may not be for you…but it is for her,” said one user.