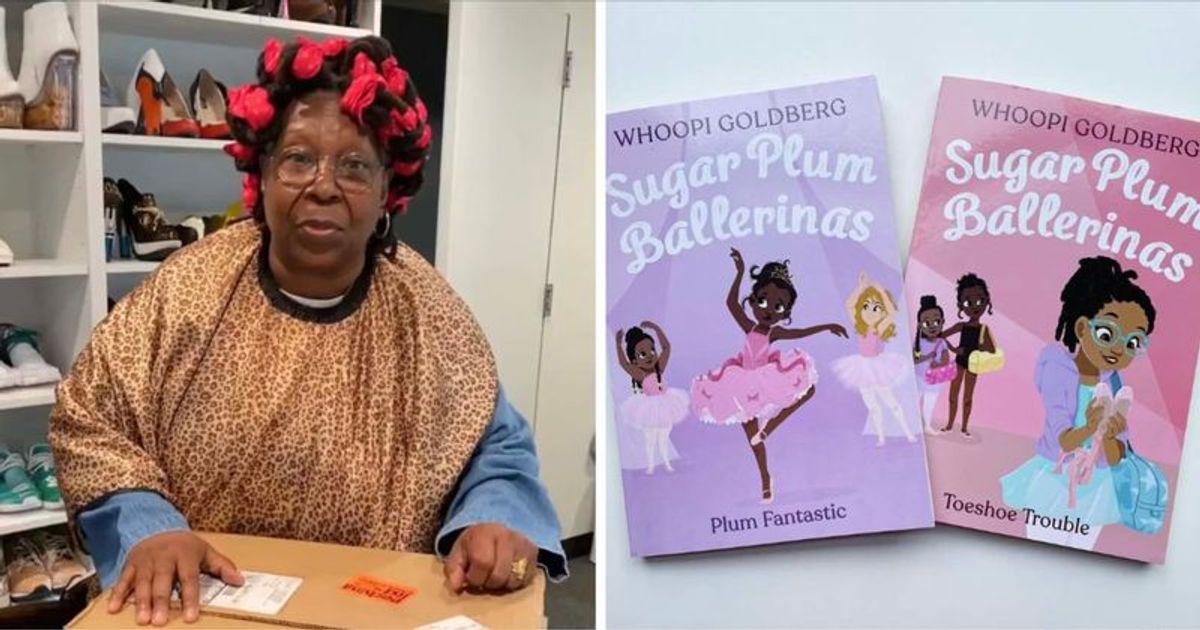 Whoopi Goldberg, 66, appeared to take a brief break from the chaos in The View in a relaxed video, sporting a “no makeup” look. While she wears her hair in short dreadlocks on TV, she wore it more casually off-screen.

In the video posted to her Instagram page, Whoopi had tied her natural hair into pigtails with red ribbons. She wore a leopard print tabard over a denim dress while promoting the re-release of her children’s book Sugar Plum Ballerinas.

“Well, I think these are all the books I’ve been waiting for,” she exclaimed as she excitedly opened a box. “Ah yes, here they are. Here are my books,” she says, holding the pretty covers up to the camera. “These are the latest versions of the Sugarplum ballet flats and I want everyone to know about them because they’re fun stories for girls!” explained the TV star. “And it’s about all these brown and white girls who want to be scientists and doctors and things but their moms want them to be ballerinas.” She continued. Whoopi then explained how she planned to sign the books that were sent.

She added that she’s “getting ready for the other job I have,” probably referring to her role as The View host. She appeared to have captured the video from the set’s dressing room.

The ‘Ghost’ star has been the subject of a lot of excitement for her on-screen lapses lately, with many calling for the talk show host to be fired over her controversial comments and statements.

Just this week, Whoopi “clapped back” when co-host Sara Haines was hired to read a legal announcement about Republican Congressman Matt Gaetz, who has been vocal about his views on abortion. Fans quickly noticed her reaction, leading to a promotional delay. “A legal note – Congressman Matt Gaetz has not been charged with any crime and has denied any wrongdoing,” Sara told viewers. To the surprise of viewers at home, Whoopi interjected, “Yes, but you’re a liar, sir.” “We’ll be right back,” she said before the show went on belated break.

Then, earlier this month, Whoopi was irritated by her longtime co-host, Joy Behar. The TV stars had a heated discussion about President Biden shaking hands with the Saudi crown prince. Whoopi then began her ranting about the presidency in general. When her co-star tried to add her perspective, Whoopi cut her off and said, “Hold on. We’ll get to that once we get back because they just stopped me.” The actress also rolled her eyes and glanced at her comment cards, which appeared to be shadowing her co-host.

Whoopi also had a tense moment this week when her and Joy’s questions to guest Charlamagne overlapped with Sara’s questions. When the show returned from a commercial break, Whoopi apologized and Sara was forced to ask her a question. A petition has been circulated on Change.org calling for the TV presenter to be fired for her “disgusting comments and actions”. There are currently over 45,000 signatures on the petition. Meanwhile, Whoopi has announced a new project that “feels right,” fueling speculation she’ll be leaving The View.