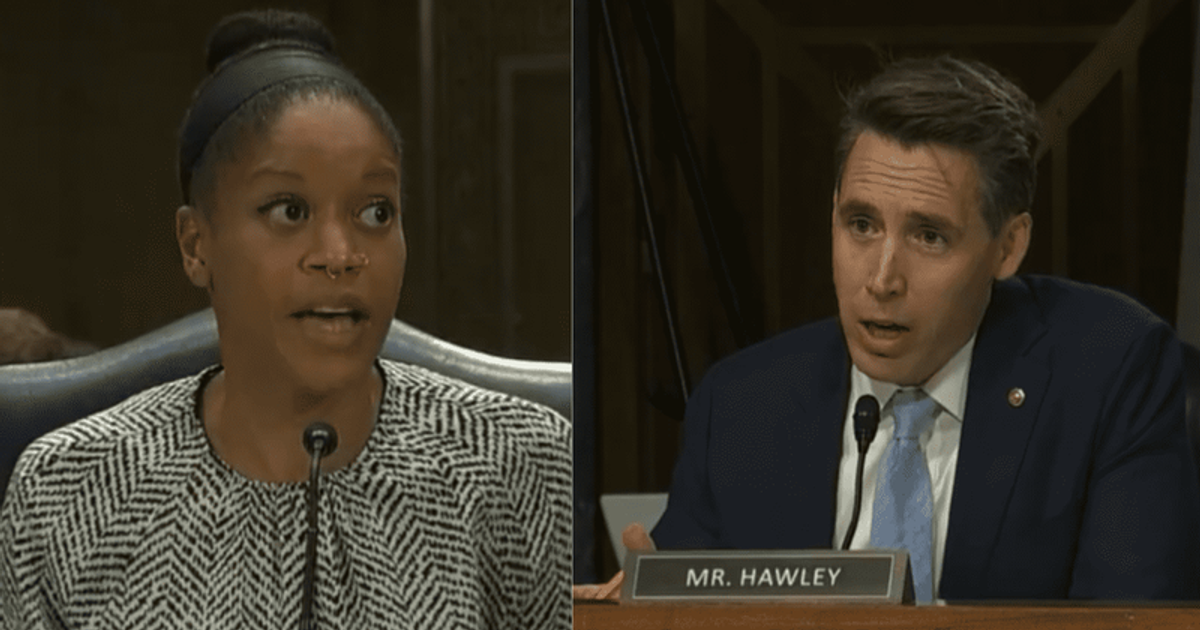 “I want to acknowledge that your questioning is transphobic and opens up trans people to violence,” said the Berkeley professor

Berkeley law professor Khiara Bridges accused Republican Sen. Josh Hawley of Missouri of “opening trans people to violence” in a heated exchange during a Senate Judiciary Committee hearing on abortion rights Tuesday, July 12, after he said that only women could get pregnant.

Hawley, an anti-LGBTQ+, anti-choice Republican from Missouri — who banned abortion just minutes after the Supreme Court overthrew Roe v Wade — asked Bridges why she used the phrase “people of potential pregnancy,” instead of saying “women” when discussing the impact of abortion restrictions. “Are they supposed to be women?” he asked Bridges, a professor at the University of California, Berkeley, School of Law.

“So, in your opinion, what is at the heart of this right?” the senator asked again. “I want to acknowledge that your questioning is transphobic. And it opens up trans people to violence by not acknowledging it,” Bridges said. “Wow, you say I open people up to violence by asking if women are the ones who get pregnant or not?” Hawley asked again.

Bridges went on to say that one in five transgender people will attempt suicide at some point in their life. “Because of my question? So we can’t talk about it?” asked Hawley. “Because we can’t talk about it because we deny trans people exist and pretend we don’t know they exist,” Bridges said. “–So I’m denying that trans people exist?” Hawley asked.

”Are you? Is that you?” Bridges asked, getting more and more confused. “So you think men can get pregnant?” she then asked. “No, I don’t think so,” Hawley said. Bridges giggled, “So you’re denying that trans people exist.” He went on to ask how she conducts her classes: “Are the students allowed to quiz you, or are they treated that way too?” he said, as if she were treating him badly . Bridges said the students are definitely welcome to question her. “We’re having a good time in my class,” she said. “You should join. You might learn something.”

Khiara M Bridges is Professor of Law at the University of California, Berkeley School of Law. She has written numerous articles on race, class, reproductive rights, and the intersection of the three. She is also the author of three books: Reproduction Race: An Ethnography of Pregnancy as a Site of Racialization (2011), The Poverty of Privacy Rights (2017) and Critical Race Theory: A Primer (2019). . Bridges graduated top of his class from Spelman College and received her JD from Columbia Law School and her PhD with honors from the Department of Anthropology at Columbia University. Bridges testified on July 12 before the US Senate Judiciary Committee on the implications of the United States Supreme Court’s recent decision in Dobbs v. Jackson Women’s Health, which overturned the 1973 Roe v. Wade decision.

The heated exchange between Bridges and Hawley went viral on TikTok and so did Twitter with more than 3 million views on both. Meanwhile, Bridges also claimed in her opening remarks that toppling Roe would lead to “racial violations,” she said.