Who are the children of P. Diddy? Four of the rapper’s SIX children walk the red carpet at the Billboard Music Awards 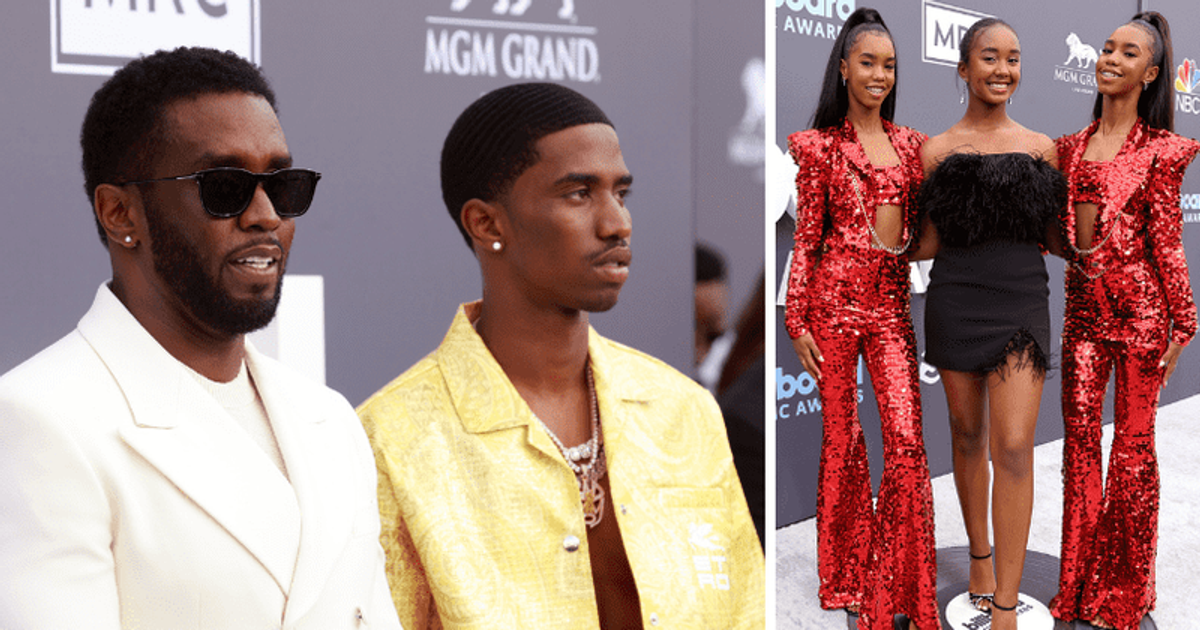 Some of music’s biggest and brightest stars descended on Sunday, May 15 for the Billboard Music Awards ceremony at the MGM Grand Garden Arena in Las Vegas. The evening turned into a family event for legendary rapper Sean Diddy Combs, aka P, hosted the ceremony. He was supported by his children – 15-year-old twin daughters D’Lila Star and Jesse James Combs, and eldest daughter Chance Combs, who is 16. Diddy’s son Christian also joined him on the red carpet and gave him a kiss on the cheek.

The daughters looked confident as they made their way down the red carpet. Twins D’Lila and Jesse wore matching sparkly red jumpsuits, while Chance, Diddy’s only child with longtime partner Sarah Chapman, stunned in a black strapless mini dress that had feathers down the top half and a slit down her left leg. She paired the outfit with matching open-toe heels.

All about Diddy’s SIX children

D’Lila and Jesse also styled their hair in a similar fashion – the duo pulled their long dark tresses back from their face in a top ponytail.

Father Diddy wore a white suit with a double-breasted blazer over a white sweater to make a statement on the red carpet. For his evening’s red carpet, he deviated from the white theme and opted for black shoes. The rapper and entrepreneur, best known for his song “I’ll Be Missing You,” let his hair grow out of his usual short hairstyle. Diddy’s son Christian looked striking in mustard yellow pants, a yellow patterned blouse and white trainers

Diddy is the father of six children. His eldest son, Quincy Taylor Brown, was born in 1991. Quincy is the biological son of Kim Porter and singer Albert Joseph Brown. Diddy adopted Quincy when he was 4 years old while he was in a relationship with Kim. Quincy was noticeably absent from the Billboard Music Awards celebrations.
Kim and Diddy had son “King” Christian Combs in 1998. Kim dated Diddy on and off in the years leading up to her death in 2018 at the age of 47.

Diddy also has a 28-year-old son Justin Dior Combs with fashion designer Misa Hylton Brim. Chance Combs was the result of an affair between Diddy and his longtime collaborator Sarah Chapman. Justin is known for his luxurious lifestyle, dating life and super expensive gifts he receives from his father. On Justin’s 16th birthday, Diddy gave him a $360,000 Maybach car. He also gifted him a chauffeur with the car. In 2012, Justin was slammed for accepting a scholarship to the University of California, Los Angeles, as his father could easily have afforded the $54,000 annual tuition.

Christian Combs, who looks just like his famous father, is also the most interested in becoming a rap star. Under the King Combs moniker, Christian has released a string of singles starting with “Type Different” in 2017 and one the next year with Chris Brown. Diddy brought the likes of Kendrick Lamar, French Montana and Meek Mill to perform at Christian’s 16th birthday party. The star-studded event was attended by a slew of celebrities including Khloe Kardashian as well as Kendall and Kylie Jenner.

Diddy’s 16-year-old daughter Chance is the only child he shares with Sarah Chapman. Chance was born in July 2006, five months before he welcomed his twin daughters D’Lila Star and Jessie James Combs with Kim Porter. Chance is an aspiring actress and the proud dad recently took her to the Oscars red carpet. Chance looked stunning in a beaded Dolce & Gabbana dress which she paired with Lorraine Schwartz jewellery, a Jimmy Choo clutch and Stuart Weitzman heels. “It’s my first time at the Oscars, so I’m really excited to be here,” she said. Chance revealed that she’s a big fan of Zendaya. “She’s someone I really want to work with in the future,” she said on the red carpet.