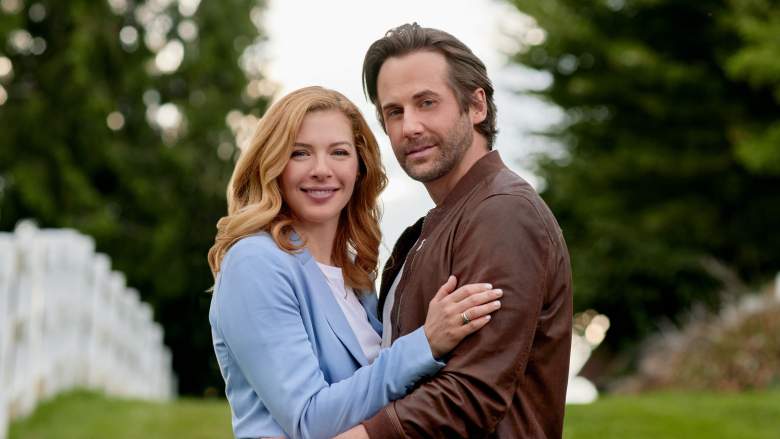 Hallmark’s latest film, The Secrets of Bella Vista, premieres Sunday, September 18 at 9:00 p.m. Eastern/8:00 a.m. Central on Hallmark Movies & Mysteries. The film stars Rachelle Lefevre and Niall Matter. Read on to find out all about where the movie was filmed and the cast involved.

The Secrets of Bella Vista, originally titled The Apple Orchard, was filmed in and around British Columbia, Canada, including Vancouver and Langley. The film was directed by Heather Hawthorn Doyle, who often directs in Vancouver, British Columbia. It is also a production of Two 4 the Money Media Inc., a Vancouver, BC based company

Robyn Wiener shared this photo during filming the last two weeks of June and tagged the image as being taken in Langley, British Columbia. She tagged Lefevre in the photo along with Doyle and others. Wiener wrote: “Horses and fly swatters. The two are not related 😉 A set is always so much nicer when you have these beautiful creatures around and it’s a great way to end the 2/3 week of filming.”

Hawthorn Doyle posted this next photo to Instagram during filming and wrote, “It takes a village and this is a really good one.”

She also took photos with animals and wrote, “Let’s see if we can get these guys in the movie!”

Pictures from SleepyKittyPaw on Twitter showed the magic behind the June apple harvest!

Kate Gajdosik shared some behind-the-scenes pictures on Instagram, including this one from day three of filming. She tagged Hallmark in the picture and wrote “#comingthisfall”.

Film director Jesse Young, who was also tagged in some behind-the-scenes pics, shared a photo from the same scene and tagged it in the Vancouver area.

While Gajdosik didn’t share exactly which apple orchard they filmed at, she did share plenty of behind-the-scenes moments on Instagram. Here are some. Lefevre is marked in this first.

It rained on the eighth day of shooting.

Here are two of the horses starring in the film.

Day 11 was beautiful. She wrote, “I’m grateful to have such a stunning location to film all week.”

And here’s a behind-the-scenes look at Matter and Lefevre.

The film’s synopsis reads: “Tess Delaney (Lefevre) receives startling news from estate executor Damhnaic McAuley (Matter) that she has inherited half of an apple orchard from her father, whom she never knew, and a half-sister named Isabel (Helena Marie, ‘My Perfect Landing’) that she didn’t know about. When Tess visits the orchard and bonds with her newfound family, she learns that the orchard is heavily in debt. Using their knowledge as antique experts, Tess and Isabel work to unravel the mystery of their grandmother’s “treasure” that could be the key to saving the orchard. And Tess ultimately finds a new self-image in the process.”

This adaptation was inspired by bestselling author Susan Wiggs’ 2013 novel The Apple Orchard. The Apple Orchard is the first book in a trilogy entitled the Bella Vista Chronicles. In 2016, the author announced on her blog that the film was acquired by Hallmark.

Wiggs wrote: “IT’S HAPPENING. The Apple Orchard becomes a movie. phew! Tess, Dominic, Isabel, Annelise, Magnus… they all come to life. My Pinterest boards in Bella Vista are full of images I’ve collected while writing The Apple Orchard and its companion volume The Beekeeper’s Ball.”

Canadian-born Rachelle Lefevre plays Tess in the film. Earlier this year, Lefevre made her Hallmark Channel debut in the original film, Moriah’s Lighthouse.

According to her bio, she has starred in numerous TV shows and films. In addition, she has found the opportunity to pursue her passion for independent cinema during breaks from working on television projects. She has appeared in films with an impressive roster of major male stars including Paul Giamatti, Channing Tatum, Jason Statham, James Franco, Ryan Phillipe and Matt Dillon.

She shows off her great sense of humor in her Instagram posts.