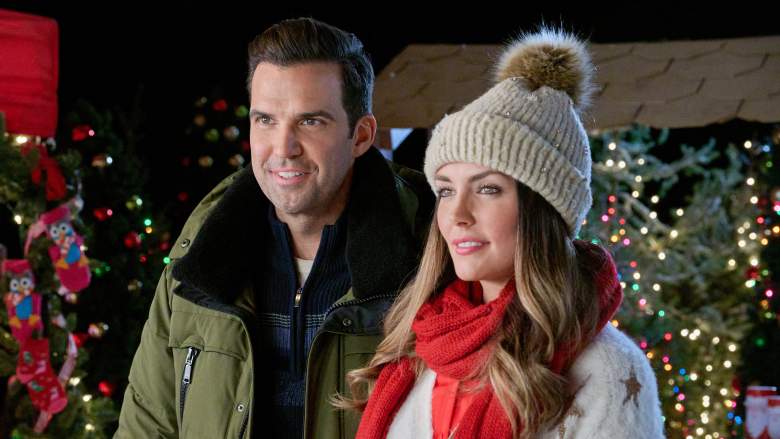 Hallmark Movies & Mysteries’ newest film, Long Lost Christmas, premieres Saturday, November 19 at 10 p.m. Eastern/9 a.m. Central. The film stars Taylor Cole and Benjamin Ayres. Read on to find out all about where the movie was filmed and the cast that brought it to life.

Long Lost Christmas was filmed in the British Columbia region of Canada, including Agassiz-Harrison. Filming wrapped on Sept. 30, according to Ayres’ social media posts.

According to Trailtimes – a news website based in the town of Trails, British Columbia – Ayres surprised several passers-by looking at the decorations along Pioneer Avenue and took a short video of the encounter on social media.

In the video of the article, Ayres says, “I think it’s such an honest reaction. It’s super fast. What I love about it is that it’s really brought in all these Hallmark fans from everywhere. I wish I had continued because even the husband said, ‘Oh I know all your films!’”

The film is based on Joan Kilby’s novel of the same name. The author wrote about the making of the film on Tule Publishing’s website. In her post, she wrote: “Hectic arrangements were made to travel from Australia to Vancouver, Canada so that I could visit the set during filming. Vancouver is my hometown and I hadn’t seen my family since Covid so I was doubly thrilled to be able to go. “

She went on to talk about one of the filming locations, the Harrison Hotsprings.

“The site, Harrison Hotsprings, is a small lakeside resort town in the foothills of the Cascade Mountains,” Kilby wrote. “It was an excellent replacement for the fictional town of Sweetheart, Montana. The private home that served as my hero’s log home could not have been more perfect inside and out. Filming late in the summer in unusually warm conditions meant the ‘snow’ you see in this photo is actually white felt.”

In the same article, they published a few behind-the-scenes pictures of the sets and actors.

Concluding, Kilby wrote: “The film version of Long Lost Christmas differs from my book in a number of ways, but that is normal given the nature of the two media and I think the screenwriter made an excellent choice. I can’t wait to see the whole movie…”

Taylor Cole, who plays Hayley, has appeared in a number of original films produced by Hallmark, according to her bio. Recents include Making Spirits Bright, One Winter Wedding and South Beach Love for the Hallmark Channel, and Ruby Herring Mysteries for Hallmark Movies & Mysteries. Cole has guest-starred on a number of popular TV shows, including “Salvation” and “CSI: Miami” on CBS, “The Originals” on The CW, “Impastor” on TV Land, and “The Glades” on A&E Network. Both “The Event” on NBC and “Summerland” on The WB once had them as regular series.

Benjamin Ayres plays Blake. According to his bio, he recently starred in the movie Unless. The film had its world premiere at the 2016 Toronto International Film Festival. Zachary Miller on the CTV/NBC medical series Saving Hope, which aired for five seasons. Ayres recently had a recurring role on Detention Adventure. He has also guest-starred on The CW’s “The Good Doctor” and “Burden of Truth” and “Falling for Vermont” on the Hallmark Channel.

“Just walked around town giving out desserts with @taylorquinncole 🥰,” he shared in a post.

“Special shout out to Allen and Karolin for making our 2 week stay at @harrisonhotspringsresort such a wonderful experience,” he wrote in another post.

“We had a day off from filming our Christmas movie and couldn’t decide what to do!” he shared.

“Hugs to our crew and cast of #LongLostChristmas this is closure!” he wrote on 9/30.