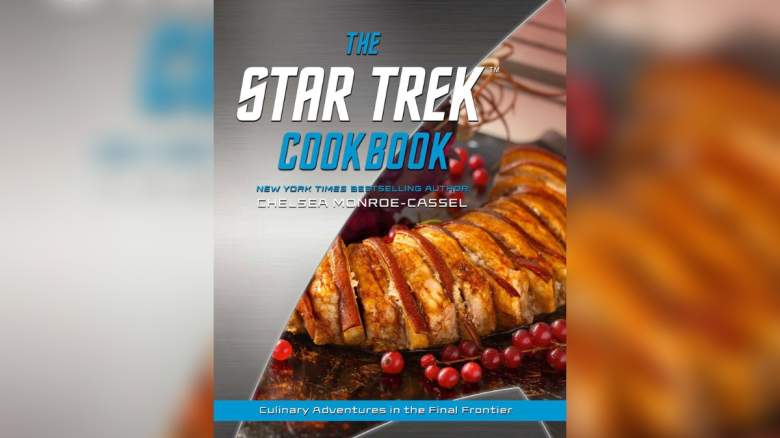 Chelsea Monroe-Cassel knows how to take fictional recipes and turn them into real-life masterpieces, and she just wrote the Star Trek Cookbook. She sat down to chat with Heavy about designing Ktarian Pudding, mixing Romulan Ale, and making gags when you’re out of mosquito larvae.

Yes I was a picky eater before but thankfully it cured me.

Actually a happy coincidence. A friend and I were trying to decide what to make for dinner one night and we decided to make something out of Game of Thrones. That was before the show started. We both read (or read) the books, and the food descriptions sounded so good and enticing that we thought, “Let’s just, I don’t know, let’s just be weird.” Let’s try that.” And at that point, there weren’t any recipes online for this type of food, so we made some dinner, we made lemon cake for dessert, and we thought, well, if there aren’t any recipes, maybe we should make recipes and add them online. Because that’s what normal people do. We’re kind of creative high-flyers.

And then, very quickly, that turned into a Game of Thrones cookbook deal and it was just a wild ride from there.

I always start with a lot of lists. I make a silly number of lists starting with what I KNOW goes in the cookbook. You know, the things that people expect. The gagh, the plomeek soup, the Romulan ale, stuff like that.

As soon as I get the green light from a publisher, I compare that to other fans and say, “Listen, this is your moment to shine. Tell me what you want in this book. What are you going to be devastated about if I don’t include it?” And the Memory Alpha and Memory Beta wikis were obviously insanely helpful just for gathering information.

And then it’s just a matter of mix and match. If I’ve seen something that looks great, does it immediately go with something on one of the other lists, or do I need to get creative in some way? Like the uttaberry cruffins. Uttaberries are canon, cruffins, not so much, but they look like it. But everything in the cookbook kind of ties into canon, which was challenging but really fun.

I look at what TV show, what novel, what game is the original source for this dish. How much do we know about it? Will we ever see it on screen? Things like that, the basic information. Do we know what’s in it? Do we know who eats it and why? Is it from a specific planet or culture? And then you just build outwards from there.

In many cases there is a lot of information about it. And in some cases I can do a little detective work and maybe do “world build patch”. The food cubes that are such iconic “Star Trek” foods from the original series: On Memory Alpha it says “We don’t actually know what that is.” On Memory Beta it says “We think they’re Gristhera” what is an Andorian thing. But it’s not canon-canon. So Starfleet saw these Andorian things and made their own version of it. And build outward from there. Perhaps for some people that can close the book on this particular subject.

My husband helped a lot with that. He’s a lifelong Star Trek fan, so he was invaluable for the role.

One of my personal rules is that when we’re trying to match the visuals to it, it has to look good. We see something like Plomeek soup on different shows, but it looks different every time. So it’s like, okay, well, make your choice. I guess we’ll pick the pretty one! But it also has to taste good. Even if you don’t include gagh in your weekly meal plan, it has to be edible and reasonably good.

I flipped through it. I didn’t really look at the recipes because I wanted to bring some sort of new perspective to them. But the behind-the-scenes stuff was invaluable in some cases and so fun to read… and informed some decisions, you know? In one part, they say they use blue sports drinks for the on-screen Romulan ale and other blue drinks of unknown names. And so I thought, “Wouldn’t it be fun to put that in my Romulan Ale recipe,” just in reference to that story.

To see the entire interview, including discussions of Monroe-Cassel’s favorite recipes and how the cutlery in “Star Trek” influenced her recipes, beam over to Daily Star Trek News. Chelsea Monroe-Cassel’s The Star Trek Cookbook is available to order now.